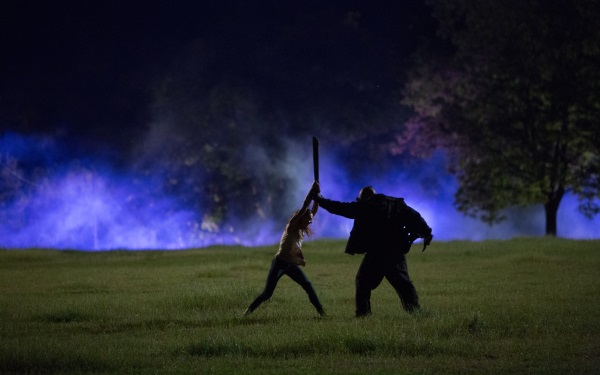 The Final Girls: A Slasher Movie Inspired by Woody Allen

In The Final Girls, student Max (Taissa Farmiga) reluctantly attends a special screening of a schlocky slasher movie, Camp Bloodbath, which her mother Nancy (Malin Akerman) had starred in as a victim years ago. Max is uncomfortable enough with going to the screening because she saw her mother die in real life several years ago, but the experience become even more distressing when somehow Max and her friends are pulled into the movie and Max meets the character played by her mother, Amanda. Max refuses to watch her mother – or at least the character played by her mother – die again, and The Final Girls portrays this personal struggle seeped in the bloody campiness that horror fans love about classic slasher movies.

The writers of The Final Girls, Joshua John Miller and M.A. Fortin, took inspiration from slasher movies traditionally having a “final girl” who escapes the fatal ending that the other, less fortunate characters face (the term and concept were classified by film studies professor Carol J. Clover in her book Men, Women, and Chainsaws: Gender in the Modern Horror Film). However, The Final Girls also parallels aspects of Miller’s life – his father, Pulitzer Prize-winning writer-actor Jason Miller, starred as Father Karras in the 1973 horror classic The Exorcist. Like Max, the younger Miller has had the unique experience of watching a character played by his father killed in a horror movie. That experience led Miller to write about his own father’s death (Jason Miller passed away in 2001) in the context of the familiar grounds of horror movies with Fortin, his partner in both life and screenwriting.

Creative Screenwriting spoke to Miller and Fortin about what inspired the unique structure of The Final Girls, why Woody Allen’s The Purple Rose of Cairo is so influential to film fans, and why their vision for The Final Girls differed from the final film.

Camp Bloodbath, in The Final Girls

I assume the two of you watched a lot of slasher movies while you were growing up. What movies inspired The Final Girls?

JOSHUA: The movie we wrote was originally out of love of slasher movies but also came into existence because my father played a priest in The Exorcist, Father Karras. We wanted to do some kind of tribute to that. We’re writing partners and we’re also partners in life, so Mark knew I was trying to tell a story about my father’s death but I couldn’t really tell it in any factual way. As they say, sometimes fiction is closer to the truth.

It was about wanting to tell a story about grieving and letting go, but doing it in such a way to circumvent the usual overly sentimental stuff that happens in movies about death or parent-child relationships. We’ve always been obsessed with Carol Clover’s book and slasher movies in general, especially that Golden Age of the late 1970s and early 1980s. It was just sort of a perfect storm with different elements that combined together to be The Final Girls. We decided we were going to tell a story about death, and we were interested in talking about it in the world of the slasher film where death is totally cheap and there’s no such thing as mourning or real human relationships.

M.A.: In terms of inspiring the slasher elements of the movie, Friday the 13th Part II and IV were definitely templates, as were The Burning and Nightmare on Elm Street 4.

Sleepaway Camp, obviously. It was pieces of the really trashy ones, but when I say “trashy” I don’t mean to denigrate any movies. We love them all equally, but we know some of them are better than others.

1980s slasher films have long been a target of comedy movies. What do you think makes them so ripe for comedy?

M.A.: They’re repetitive. They have a certain kind of almost slapstick mechanism to them and they don’t seem to take place in any real world, like many broad comedy movies.

Was the unique movie-within-a-movie structure always part of the screenplay?

JOSHUA: That had always been the case. Like I said before, the fantasy idea was if I had fallen into my father’s classic horror movie. What would that be like? I grew up watching my dad in The Exorcist, and there’s something haunting, strange, confusing, and a little bit unnatural to see your parent constantly die in a film. But it’s something that also becomes iconic, and we tried to deconstruct what the effects of that would be, as well as what it would be like if you had a second chance, but your second chance was inside of a movie? Ultimately, The Final Girls is a fever dream. Our idea writing it was always that Max was having a strange out-of-body experience or was in a coma and this was all within her mind, heart, and soul about resolving the grief about the loss of her mother.

The line “What the hell kind of summer camp has waterbeds?” kind of sums up the absurdity of the slasher genre. At any point did you find yourself thinking you were getting too over-the-top with the Camp Bloodbath sequences, or did you just decide to run with it?

M.A.: Originally we wrote a hard R and the tone was much scarier. Because of certain restrictions put on us by the studio and the bond company I believe, we had to adhere to less gore. The result is that we leaned more toward comedy. That was our collaboration with Todd [Todd Strauss-Schulson, director of The Final Girls] and some of the actors improvising. Ultimately the comedy came out of necessity because we weren’t really able to go full force the way we would’ve liked to originally.

Alexander Ludwig as Chris Briggs, Taissa Farmiga as Max Cartwright and Nina Dobrev as Vicki Summers in The Final Girls

Because of that were there any horror conventions you weren’t able to fit in the screenplay?

JOSHUA: The answer to that would be blood. A slasher movie has tons of gore and blood, and that’s one of the most important tropes because I think that’s what makes people freak out. Our hands were tied in allowing us to portray any serious bloodshed.

M.A.: Be that as it may, I don’t know if we’re ever going to come up with new ways to decapitate people. How many ways do we need to see people explode, or chopped up, or God knows what? If you really want to see men and women blown to bits, there are a wide variety of films that you can select to watch.

At the end of the day, the heart of the movie is the relationship between Max and Nancy. Was it disappointing not to be able to play with the level of violence of classic slashers we were honoring? Yes. Was it an essential to the movie? No, because in the long run I think we were more interested in being remembered for the relationships than for amazing kills.

Touching upon the relationship between Max and Nancy where Max has to act like a parent towards to this younger version of her mother, it reminded me a bit of a non-horror 1980s classic, Back to the Future.

The Purple Rose of Cairo is another great film that shows the absurdity of movies versus real life’s problems.

JOSHUA: The Purple Rose of Cairo was a huge inspiration while we were writing the movie. It’s hard not to take that into account because it’s one of the great movies that is about our obsession with fantasy. It’s also a movie made for film lovers because I think we all secretly wish we could disappear into the movies. Look at Walt Disney, he built a whole theme park that’s a living movie, really. [Laughs]

M.A.: That’s really what the movie is about, it’s a girl’s fantasy of what it would mean to erase the past, the way in The Purple Rose of Cairo Mia Farrow and Jeff Daniels have that opportunity, or she thinks she has that opportunity but unfortunately she does not. It became a sandbox to play in for us, and it was a lot of fun to write.

How does your writing process work?

JOSHUA: There’s no real set process. We both spend a tremendous amount of time talking instead of writing. I think that’s good and bad. We spend a good deal of time talking about things that interest us.

JOSHUA: We really make sure we understand a subject on all levels before we actually fully engage into writing. Then when we feel we have some authority over our subject or the world we’re creating. When that starts there’s a process of Mark taking a crack at stuff, and then I come in and rewrite it, or because we both have acting backgrounds we both perform a lot of the scenes. There’s something that an actor knows about a line sounding authentic when it comes out of your mouth and an actor’s ear is attuned to dialogue. We use a lot of our acting backgrounds. We do readings with other actors because hearing it out loud really helps.

Storytelling is an oral tradition, and I think it’s really important to hear it. A teacher of mine once said to me, “Your eyes will lie to you, but your ears won’t.” I think as much as you can bring it to life, the more insight and objectivity we have of the material.