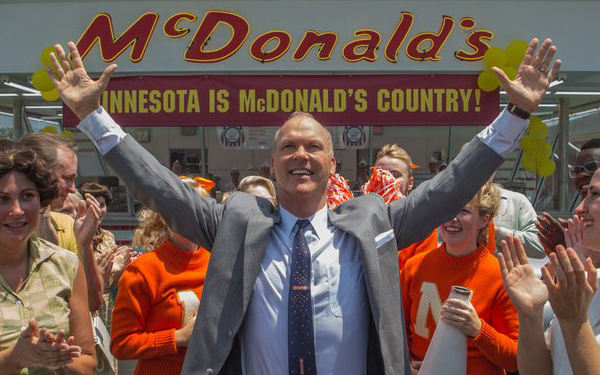 Making Your Protagonist the Antagonist: Robert Siegel on The Founder

The Founder tells the story of Ray Kroc, a businessman once described as a “Chamber of Commerce Gordon Gekko” by Matt Zoller Seitz.

Played by Michael Keaton, Kroc sluggishly but deliberately breaks bad in an attempt to acquire the McDonalds fast-food chain, and take for himself a chunk of the American dream.

Written by Robert Siegel, The Founder has a similar underdog theme to his 2008 film, The Wrestler. Beautifully-crafted, The Founder  follows Kroc as he sheds his Willy Loman skin to become a Charles Foster Kane. In doing so, he only needs to crush anyone who gets in his way.

Creative Screenwriting spoke with Siegel about making your protagonist be your antagonist, using research to get into your characters’ heads, and writing for outsiders.

How did The Founder come about?

The Founder’s origins come from one of our producers, Don Hanfield (Knightfall, Touchback), a partner with Jeremy Renner (The Hurt Locker, Arrival) in a company called The Combine.

He heard a song by Mark Knopfler who was in the 70s-80s rock band Dire Straights. On one of his solo albums, he had a song called “Boom, Like That” about Ray Kroc. I presume it’s the only song ever written about Ray Kroc and it’s basically the movie in three minutes, set to a beat. It’s the story of Ray Kroc taking McDonald’s out from under the brothers who owned it.

Don was fascinated by the song, and thought it was a fascinating piece of business history. So he said he thought it ought to be a movie. Fast forward some months or years and he went after some writers and I won the job.

Interestingly, I won it because it was originally conceived as a biopic where the brothers were the main characters, and Kroc was the antagonist, or the villain. But I thought the movie should be about him instead of the two brothers. They’re great, but they’re not as interesting.

The brothers are more one dimensional within the story.

Yes. So I pitched it in the vein of There Will Be Blood, or The Social Network, or maybe even going all the way back to Citizen Kane. Films with great men, who are polarizing. They change the world in some way. I’m attracted to those stories and I thought this was kind of similar to all of that.

In a Parade interview, Michael Keaton described Ray Kroc as somewhat of a loser who sold his soul to the devil. How would you describe the character that you created?

That’s a pretty good description. I think he’s that classic, driven person. I like that people are conflicted about him. He’s kind of a winner and a loser.

This may be an odd comparison, but while writing him I often thought of Rodney Dangerfield. Rodney’s whole thing was, “I don’t get no respect.” He was a struggling stand-up comedian, and I think he actually was a salesman before he did stand-up.

Men or women who find success later in life often seem to have a certain chip on their shoulder. Rodney hit it when he was in his 50s, like Kroc. He had this chip on his shoulder, similar to his catch phrase: he felt disrespected.

I agree with Michael Keaton, though. There are a series of subtle turning points: we didn’t want it to be something where he immediately switched from good to bad.

Usually when people change, it’s a long, slow-moving process of chipping away at their soul. In the movie, the first moment is when he’s in the restaurant in Minnesota and he’s trying to impress Joan. She asks him, “When did you start McDonald’s?” There’s a moment where he is thinking, “How do I answer this question…”

Yes. He has to think about it, but then he says, “I found McDonald’s in 1954,” and that’s kind of the moment, or the first fork in the road. Either he goes left and gets worse or goes right and stays on the straight-and-narrow.

Using powdered milkshakes is another one of those. So, ultimately, he did sell his soul to the devil, but he has no regrets about it. If he felt guilty at all, he felt like he had no choice. For him, if you’re going to win the game of American capitalism, you have to somewhat of a cold, ruthless asshole.

What kind of research was involved for the film?

When I first signed on, I was handed a huge stack of interview transcripts and archival photos.

The brothers and Kroc had an unusual form of correspondence – they would send each other Dictaphone recordings. So Kroc would speak into this recorder and then send the recording to the brothers. Then the McDonald’s brothers would record their response and ship it back. They would just do this back and fourth. They were recording monologues and then shipping them to one another

I don’t know why they did this, because they could have just spoken on the phone, but it was nice to hear these strange recording of them talking to one another on the Dictaphone.

But mostly I used these two books as source material. One was Grinding It Out, which is Ray Kroc’s autobiography. Then there’s another book called McDonald’s: Behind The Arches by John F. Love, which was more of an unauthorized expose-type of book.

In combination, the books were very useful. You kind of get the truth, and you also get Kroc’s skewed interpretation of what he’s doing, which I actually find more useful. That’s better than the truth, because you can get inside the guy’s head a little bit more.

It’s a little like The Kid Stays In The Picture, which is Robert Evans’ life told through his perspective. It’s full of all of this self-aggrandizing, so you have no idea what’s true, what’s exaggeration, or what’s a down-right lie, but you do get a better idea of the man. In that regard, the autography was perhaps the most useful.

In that scene you mentioned with Joan, does the character Ray Kroc start to believe that he actually founded McDonald’s? Is he swept up in it, or is he just lying outright?

I don’t think there’s any self-reflection. I don’t even think that question occurs to him. He’s just a shark. He’s so busy searching for prey, hunting, and trying to get bigger. An animal isn’t consumed with questions of morality. There is no right and wrong in the animal kingdom.

He even says in the movie that it’s rat-eat-rat or dog-eat-dog. He’s just trying to eat and get bigger. There’s not a point where he questions himself. He’s not even aware that he ought to be doing that. He had a very clear and prime directive to kill and grow.

In the beginning of the film he’s presented as an underdog. Most of your other films also have underdog-type characters. Is there something that draws you to this type of character?

There definitely must be, because everything I’ve ever done[has a character that is on the outside looking in. Maybe that’s how I see myself, because I do believe that people write what they know. I love outsider characters. I love characters where society sees them as a loser. It would be hard for me to write a story about an incredible, world-conquering winner.

My favorite movies also have this type of character, that is outside looking in; Saturday Night Fever, Midnight Cowboy, Raging Bull, Taxi Driver, and basically every 70s Martin Scorsese movie. They are all movies about guys who are trying to get into something and are struggling to get through to the other side. I think every writer has a thing, and that’s my thing.

I read a Paste interview from 2009 where you mentioned that in the beginning you felt like you were almost mimicking Judd Apatow’s screenwriting style. Was there anything other than experience that helped you find the voice you have today?

No, not really. As I probably mentioned in that interview, I was coming from a comedy background. I worked as the Editor in chief at The Onion for years, and when I started screenwriting, I just assumed that I was a comedy writer, so I started writing comedies.

I was doing it in a very mechanical, uninspired way. I was replicating what was popular or what was big at the big office. I would up writing a series of very uninspired facsimiles of movies that were big at the time, which was pretty much any movie starring Ben Stiller, Will Ferrell, or Jack Black.

It was OK, because I was writing stuff that was good enough to get passed along, from the bottom-level studio script reader to the next guy up, but none of them were exciting or fresh.

Rather than writing what I knew, I was writing what I had been doing, which was comedy. I was also aiming to write things that were big or that would sell, as opposed to something independent, because I didn’t think anyone would make it.

Then, when I started to write what excited me or what I loved—which were dark, intimate character studies—I had a breakthrough with Big Fan. It was uncommercial, dark, and didn’t seem like the kind of thing that gets made, but I wrote something good.

It was the movie that became my calling card for years. It didn’t actually get made until six or seven years later, but that script got me work, and it got the ball rolling on my career. Off of that, I got The Wrestler. Big Fan took place in the dark underbelly of sports, which is very specific, and The Wrestler can be described as the same thing.

What do you find to be the most difficult step in the writing process?

Structure and plot. Other writers love putting index characters on a wall or shuffling scenes around to make things link up, but that is something painful to me. That is something I want to get past, so I can get back to creating character.

Sometimes I’ll do rewrite work, and I’ll have a phone call with the producer who tells me what the structure is great, but the characters aren’t working. That’s confusing to me, because it seems like the writer did the hard part but skipped the easy part. But every writer has their strengths and weaknesses. What comes easy to one person may be the bane of someone else’s existence.

But the reality of being a screenwriter today is that you have to outline. With paid writing, they won’t even let you proceed to the first draft without an airtight outline. And that just pains me. I just want to open it up and start playing. Obviously they’re not wrong, but I just hate it.

Has your approach changed since Big Fan?

I think the lessons I learned from Big Fan still apply today. Trust your gut. Write what you know. Write what you love. Be yourself. All that kind of stuff. I’ve learned how to deal with studio notes, and how to collaborate better, but I think the fundamental stuff has remained the same.