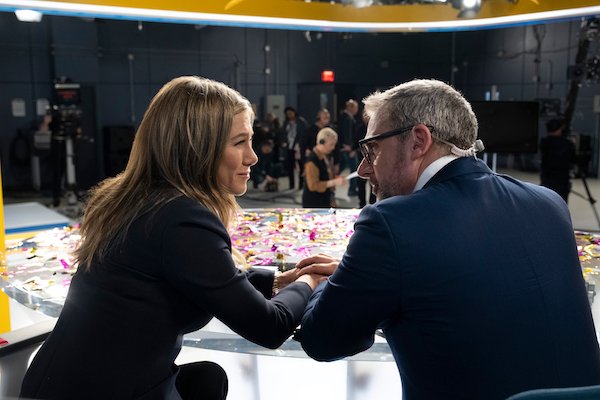 “The Insidious Nature Of Power” Kerry Ehrin On ‘The Morning Show’

Kerry Ehrin, the showrunner of The Morning Show on Apple TV spoke with Creative Screenwriting Magazine about developing a television show about sexual harassment in the workplace. The TV series was co-produced by Hello Sunshine and stars Reese Witherspoon (as Bradley Jackson), Jennifer Aniston (as Alex Levy), Billy Crudup (as Corey Ellison), Tom Irwin (as Fed Macklin), and Mark Duplass (as Chip Black). Based on the fictional novel Top of the Morning: Inside the Cutthroat World of Morning TV by Brian Stelter, the television version set out to raise awareness of these thorny issues that are often downplayed or conveniently swept under the rug. People choose to believe what they want to believe – even if it’s a lie.

The Morning Show opens up a Pandora’s Box of complex themes and emotions. At its core, “The Morning Show is about why people lie to each and lie to themselves. It’s about outsized ego and ambition,” mused Ehrin. It is also the story of the fall of a beloved TV show anchor Mitch Kessler (Steve Carell) after being accused of sexually preying on a junior talent booker Hannah Schoenfield (Gugu Mbatha-Raw). “It was about the reverberations that happened at UBA network after that accusation.”

The sanitized, family-friendly façade of the morning TV show America invited to breakfast every morning was crumbling. “The story was told from the point of view of Kessler’s co-anchor Alex Levy (Jennifer Aniston) and how it affected her own life.” Levy wasn’t the unaware bystander in this mess, despite her apparent shock on live television. How much did she know? How much did she want to know? What did she do? “The events  forced her to look at her own behavior and areas of culpability.”

The ramifications of two co-working adults having a sexual relationship is timely for exploration. Ehrin decided on a three hundred and sixty-degree view of this contentious issue as The Morning Show traversed themes of consenting adults, cover-ups, and abuse of power. Ehrin wanted to tell this story from multiple points of view to enrich the show.

Kerry Ehrin re-iterates that The Morning Show is about lies. “Kessler is living the lie that Hannah Schoenfield [the victim] willingly had sex with him“. He was not accused of rape and Hannah was not forced.

The Morning Show also explores, “How insidious unchecked power can be and how we often willfully cater to it.” according to Ehrin. She also wanted to define the dubious morality that has grown from centuries of workplace practices.

Ehrin also wanted to highlight the hypocrisy that occurs in these workplace environments that have grown from centuries of unquestioned workplace practices.

Ehrin hopes The Morning Show will encourage audience debate and initiate social change. She hopes both men and women might become enlightened and change certain attitudes towards workplace behavior. Sexual harassment is a conversation for everybody.

The showrunner did not want to sensationalize the issue of sexual predators in the workplace. “Hopefully men will see a point of view they have not seen and women will be more open to coming forward.” Shining a light on an issue is a good disinfectant.

During the development of the show, Kerry Ehrin admitted she received many notes to make The Morning Show more explosive, but she resisted. “It would have wrecked the intention of the show. I didn’t want it to be a judgment about sexual predators. I wanted the audience to watch it and make up their own minds.” If the story focused on how much of a monster Mitch Kessler was, the audience was told what to think rather than draw their own conclusions.

There are so many documented and anecdotal cases of workplace sexual harassment, it would have been easy for Kerry Ehrin to become bogged down with research. “I pulled a lot of the story out of my life experiences, and from people I knew or fusions of them.”

With such controversial subject matter, it’s easy to make the characters somewhat caricatured.  Ehrin countered this by grounding them in reality so they felt real. “I inhabit the characters when I write them. I study their behavior, their psychology, and the way they react to things. I’m interested in their nuances.”

“Those are more interesting stories to me that lie under the bigger character stories. How they approach a thing and how they twist it in their minds to make sense of it themselves.”

One of the key aspects of The Morning Show is to challenge the assumption that women always tend to be supportive of each other in the workplace, especially in cases of sexual harassment. This is especially true of the testy relationship between Alex Levy and loud-mouthed Bradley Jackson.

There isn’t always a sisterhood (or brotherhood for that matter) in the workplace. “It is a myth that all women bond and support each other in the workplace. It puts so much undue pressure on them. It’s not enough to simply be good at your job, women must now politicize their gender. If women don’t do it, they’re considered bad,” said Ehrin.

In the end, Chip led the rebellion when he had no further options. There aren’t purely good or evil motivations for any of these murky characters which make for gripping drama.

Ehrin is quick to point out that these were not bad men. “The toxic workplace environment made Mitch’s actions ‘normal’ and maybe even fun, even though he should have known better. There were no corporate structures to prevent this from happening or have repercussions.”

When Kerry Ehrin was asked to pitch her take on The Morning Show to Apple TV executives, she described it as, “The fall of mankind. The cracks, the psychology, and lies. I pitted that against the Game of Thrones theme of ‘who’s gonna fill the chair’, especially when an outsider comes into the workplace who doesn’t play by the rules. Everyone is both an asshole and likable.”

She wanted the show to have a lot of humor, yet be real and raw.

When Ehrin hired the TV writers’ room, she primarily sought recommendations and contacted writers she worked with before. She took a meeting with the writers to see if she could work with them. This was more important than having a perfect writing sample.

‘The scripts I fall in love with, are the ones you forget that you’re reading. There is no effort in reading them. You’re in another place. There is a tone, a feeling, a sensibility.”

The showrunner described setting up a TV writers’ room as, “Creating a cocktail of problem solvers.” One writer may write sparkling, natural dialogue, while another may have good story or character ideas.

When she’s not in the TV writers’ room and looking for new ideas for TV series, Kerry Ehrin admits to, “Looking at a wall and see what I like about it. I draw on those impulses and turn them into story ideas.”

Ehrin offers simple advice to aspiring TV writers. There is no set path. You create the path. “Your job is to create stories that have meaning to you – to your brain and to your heart. Follow your own instincts.” Don’t give up because it’s often just before you achieve success. Be ready to hit the ground running when you get hired and have something to say in the show.”

“Storytelling is very powerful. We sit around the fire hearing behavior stories.” Stories are meant to explore a truth, but they can be misused and manipulate. Such can be the case with certain media who claim to be telling the “truth.”

We previously interviewed Jay Carson, the other co-creator who co-wrote The Front Runner and Lauren Neustadter, who co-executive produced the show.