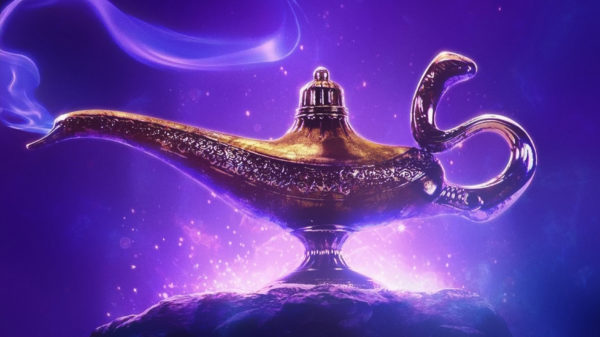 There probably hasn’t been a director as ill-suited to the material since Richard Attenborough was tasked with bringing the Broadway smash A Chorus Line to the big screen. Director Guy Ritchie may be expert at gritty, outrageous, crime capers like Snatch and RocknRolla, but who thought such films made him perfect for a Disney musical? From the very get-go of his take on Aladdin, the filmmaker seems to be out of his depths – uncertain where to place the camera during dance numbers, lacking control of tone from scene to scene, and unable to make his characters as memorable as their cartoon predecessors.

Sure, a lot of what made the 1992 animated feature such a classic are present, including its famous songs, but this over-amped, hellzapoppin’ adaptation is ultimately more pageant than proper show.

Ritchie’s films have always thrived on energy, and so did Disney’s 1992 Aladdin, especially due to Robin Williams’ whip-smart, mile-a-minute, vocal performance as the big, blue Genie from the lamp. Will Smith takes over the role here and brings a similar comic energy to the part as the late, great comedian did, but Ritchie seems determined to have every element of the film match such ebullience. The film is breathless, while never taking a breath, and when everything is big, brassy, and bold, even a manic genie has trouble standing out.

The film veers into trouble five minutes in, during Aladdin’s first solo. “One Jump Ahead” is already a tongue-twisting song, but Ritchie over-edits the visuals, turning Aladdin’s gymnastic prowess into a series of quick cuts that overwhelm the scene. Ritchie even accelerates the frame speed to make it more frenetic. It’s not only jarring, but frankly, a film technique that looks amateurish. (I’m not sure it even worked when Richard Lester used it in A Hard Day’s Night back in 1964.) Ritchie incorporates the same sped-up styling for a couple of the dance numbers too, begging the question if his desire was to get through the musical numbers as quickly as possible. And fast edits can’t cover the fact that  Ritchie films almost every dance number with his camera up too close to the action. Dancing needs breathing room and there’s precious little of it in this tent pole adaptation.

Ritchie seems uncomfortable with the Broadway-esque machinations needed for this material. Is that why he’s truncated so many of the songs? Granted, the script he wrote with John August doesn’t seamlessly work them into the dialogue, but cutting down Jasmine’s first solo suggests a lack of faith in the music. Her first number is designed to establish character, but reduced to a mere smattering of lines seems indicative of a filmmaker who has little time for such essentials. Additionally, many of the sublime lyrics by Howard Ashman and Tim Rice get completely drowned out by all the noisy sound effects and feverish movement cascading through all the musical numbers. There are too many extras, too many bits, and too much action, all cut with a frenzy like an entrée at Benihana. Even Alan Menken’s orchestral score struggles to break through the mania.

Ritchie’s struggle with the material is never more paramount than within the direction of his cast. Points to Ritchie for ethnically-correct casting, but he directs most of them to be more cartoonish than their drawn counterparts from 1992. Mena Massoud pitches most of his performance as the title character straight to the rafters. Subtlety doesn’t suit him any better than Prince Ali’s oversized turban. Marwan Kenzari captures the evil of Jafar without ever once making his malevolence fun to watch. (Jonathan Freeman’s original vocal performance was far superior and sexier too.) And what movie is Navid Neghaban playing in as the sultan? He’s so serious, he seems to think he’s in an Asghar Farhadi film.

Naomi Scott is very good as Jasmine, even though the character is mantled with a heavy-handed equality story. Scott’s wounded eyes soar as much as her soprano vocals do, and she stands out by making her character a full-rounded one. Even better is Nasim Pedrad as Dalia, Jasmine’s handmaiden. She knows how to make every comic quip land and betters every scene she’s in. (As known for being a macho, male-oriented director as he is, Ritchie gets the best work here from his two female leads.)

Smith is Smith, which is a lot here because his comedic skills and presence are as big as the genie often appears onscreen. He had big, curled shoes to fill from Williams, but he makes “Never Had a Friend Like Me” his own with an infusion of rap and comic bits more suited to his lane. Unfortunately, he is saddled with a fake, CGI body that’s too buff by half and often appears disproportionate, but his sly facial expressions usually pull your eyes away from such unattractive special effects.

Ritchie and Disney have thrown gobs of money onto the screen, and the costume budget alone looks like it could finance a half dozen Greta Gerwig films, but the movie looks cheap. It’s overlit, the special effects are shockingly slipshod, even in the “Whole New World” show-stopper, and the quality of the musical numbers isn’t any more sophisticated than the entries in Disney’s High School Musical franchise.

The FX wizards have done wonders making the monkey, tiger, parrot, and flying carpet characters look convincing, but the script fails to give the key secondary villain of the bird proper personality. Iago speaks, but it’s not Gilbert Gottfried’s voice, and it makes the feathered fiend a letdown.

As troubling as so much of this production is, it likely will play fine with the kids, and it may have very well been directed to primarily appeal to them. But that’s not Disney’s M.O., as they’ve appealed to adults as well as kids from the very beginning in the 1930s when ol’ Walt mortgaged everything to bring Snow White to the big screen. Ritchie’s film oeuvre is decidedly adult too, making his choice to helm this all-family feature all the more confounding. He worked wonders modernizing Sherlock Holmes for a millennial audience, but doing the same for this beloved classic is a wish left mostly unfulfilled.

Check out the trailer for Aladdin below: