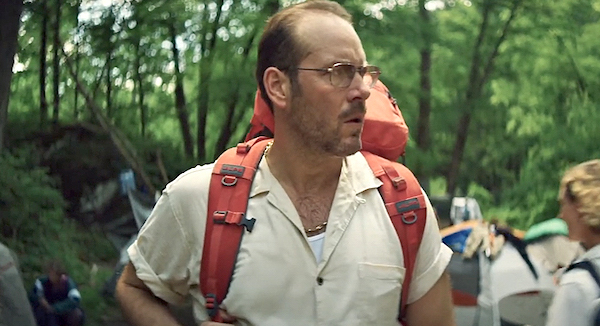 “It really was a sense of pieces coming together,” said writer/director Noah Hutton (In Silico) on his film, Lapsis which was due to premiere at SXSW earlier this year, but cancelled due to the pandemic. “Part of the concept came from my own experience as a freelancer hustling my way from gig to gig, and feeling the treadmill lifestyle. The other part of the concept came from my interest and background in science and quantum computing,” he continued.

In this unusual new film, Lapsis, a man struggling to support himself Ray Tincelli (Dean Imperial) accepts an unusual job in a strange new realm of the gig economy to support his sick brother.

Quantum computing, which some have compared to the new tech stock boom, meant there would be a new avenue in the gig economy. “I got off-to-the-races with that idea,” said Hutton. The gig in the film is known as “cabling,” which simply means running high speed cables to facilitate this level of computing.

Hutton said this fictional cabling gig was inspired from his background in neuroscience, where he’s been working on documentaries in the same thematic space. In his previous project In Silico, the documentary follows a neuroscientist’s ten-year journey to simulate the entire human brain with a supercomputer.

In the absence of too many similar films in the genre, Hutton said he pitched comps based on specific elements of Lapsis. “We would talk about forest-based sci-fi. There was a recent comp of that in Alex Garland’s film Annihilation,” said the writer/director. “There were additional obscure comps about the craziness of the world and new world building.”

In order to help producers visualize Lapsis as a movie, Hutton compared the story to other films where the main characters give in to a new world, and allow for it to essentially “take them.”

Given the cerebral nature of the film, we asked Hutton what he wanted to explore thematically. “I think the critique of capitalism and everyday workers is present in Lapsis,” pondered Hutton. He added that Ken Loach’s Sorry We Missed You also touches on a similar dynamic of hidden gig economy worker exploitation.

Comparisons aside, it’s no easy task to bring neuroscience to the masses in a dramatic way. “The neuroscience elements were really just conceptual inspirations of the cause and effect of the world – the idea of rewiring,” said Hutton.

Hutton said the story came down to character in the end. “The character I had written for Ray was truly an everyman. He’s one of us. He gets called into this new form of labor where the details of the grand plan are kept under wraps. He doesn’t need any knowledge of quantum science. He’s just a cog in the chain.”

“That was my way to release the audience of the burden of needing to understand the science to get the film. Filmmakers sometimes jam complex terminology in the dialogue that the character understands, but the audience does not.”

Hutton said he understands that it’s important for some characters to understand the technical jargon, but he hates these head-scratchers in movies. “I don’t like that approach to science fiction. I want them to feel like their journey is his journey, and [the protagonist] is never ahead of them because of their scientific understanding.”

Overall, the story is about people working together to create change. “That’s not what most films do. I think most films follow a central hero, but having him step into a collaborative effort is a tougher sell. That was my uphill battle, but it was the story I wanted to tell. I didn’t want to tell the story of a hero who triumphed when everyone else couldn’t. I wanted him to melt into a collective action. It’s not the usual approach, but what I had to do.”

Assuming that Ray is part of the collective hero in Lapsis, this would mean the villain is presumably the monopoly corporation. “The villain is a little bit of a red herring. I think the film makes you think the automation or robots are the villain, but I would argue they are not.” Instead, Hutton describes the robots as an “apparatus of the corporation.”

Science fiction is really about accepting change in the world. It does so by focusing on technology.

“If this were a straight drama without a sci-fi element, I think it would be much closer to Ken Loach’s dramas. It would be grounded with the characters doing a recognizable job from our world today.”

On the set of Lapsis

Describing the setting of Lapsis as “the parallel present,” the writer/director said, “This is another way to suggest that the next tech Utopia that’s promised to us… we might want to be a little more critical compared to those we were promised in the past.” There’s a cautionary tale in there. There are consequences.

“I think the tone is mysterious and contemplative. I think it’s also humorous and absurd.”

This is all part of the unusual tone. “I am interested in an absurdist realism that constructs an imagined world, but makes you feel like it’s extremely real. This is a film about ideas and what this world says about our world. I wanted to make an absurd world feel grounded.”

Noah Hutton is considering adapting his film into a TV series so he can push the boundaries of the world and his characters and explore them in further detail.

The screenwriter confessed to his tendency to overwrite even if doesn’t end up on the screen. “It’s not wasted or extra, but shows the creator of a science fiction story has put in the work to create the world beyond the limits of the frame.”

Creating a Cause Film

Lapis is a unique look at how the gig economy impacts workers. “I would say the ‘cause’ is collective action. It’s a cautionary tale, [in terms of] the limits of collective action. If you don’t broaden your base so the comfortable upper middle class is on your side as well, then it might all be for naught.”

Regardless of the theme or tone, the story is also about character. Too much explanation of the science and the cause takes away from the character. To represent all of this through the character of Ray, Hutton compared the introduction of the story to Hitchhiker’s Guide, where the world had passed the protagonist by.

“In the midst of a huge seismic shift, the hero being left in the dust to figure it out for himself was the best way to move into the world of Lapsis,” he said. On an emotional level, Ray is supposed to help his ailing brother first and foremost, then his fellow man, then the other workers in the same field.

Metaphorically, dragging miles of cable through a forest is also representative of the drudgery and monotony of most jobs in America today. The examination of it actually brings people together. “I hope an audience will find a more spiritual reference in how the world of Lapsis feels as they’re experiencing it through Ray.”

The filmmaker also wants to combine the intellectual with the political. “There’s a myth about the American bootstrap. It’s been exploited and stripped workers of their safety nets. I think [the film] is an emotional connection; my clan versus a larger clan,”

Hutton concluded. “This film asks audiences to reckon with how they would feel in that same kind of decision. Would they join a larger fight, or not?”