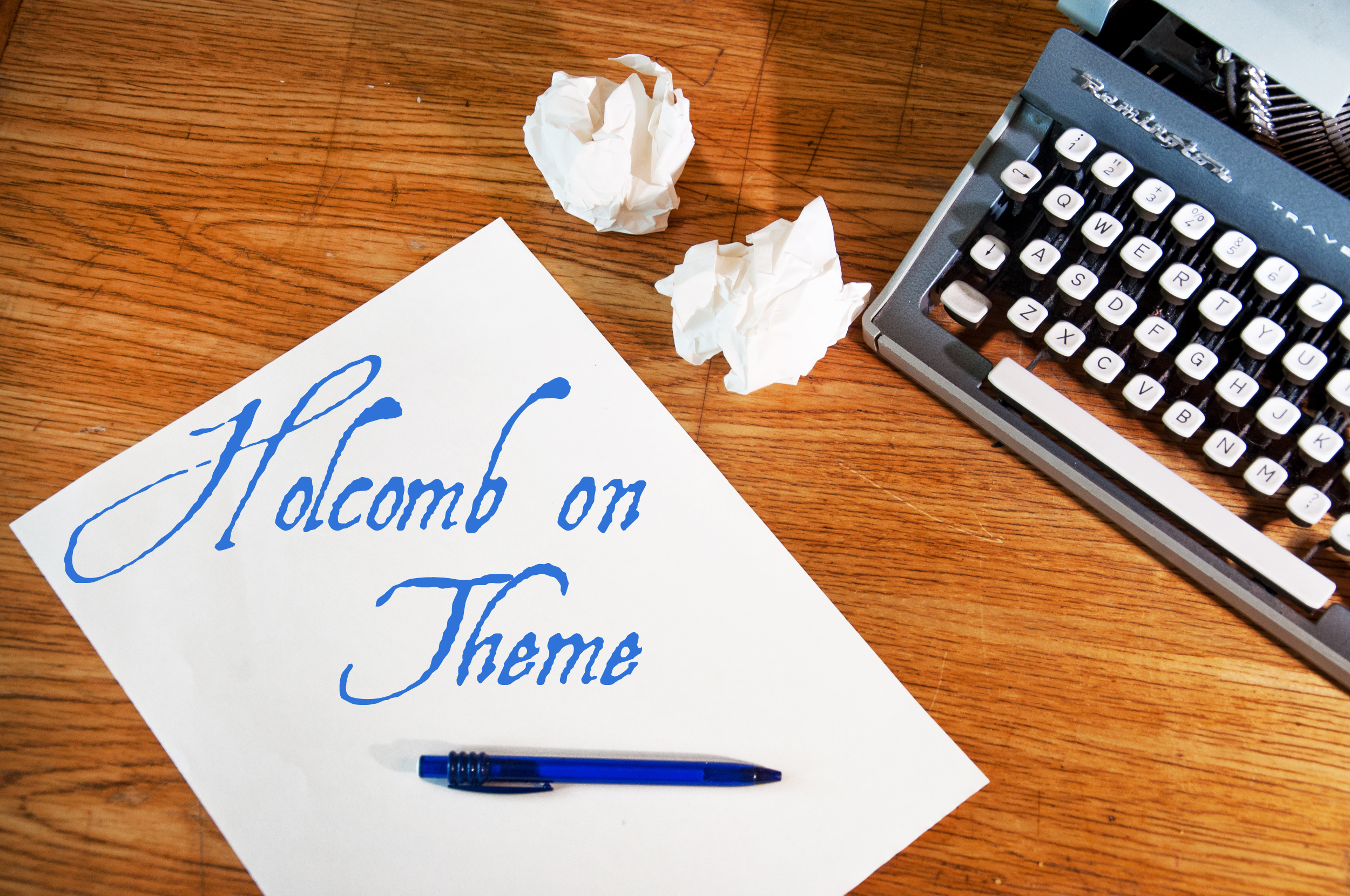 The Question of Theme

From academics in film school to producers in Hollywood, ‘Theme’ is a term that gets tossed around a great deal.

I’ve heard it used as a label for any myriad of aspects within the narrative structure; anything from plot structure, to emotional character motivations, to ways of explaining genre designations.

I believe none of these are truly accurate.

So what do we mean when we talk about theme in a story? What does it really look like?

The True Meaning of Theme

I believe theme boils down to something very simple:

At its most essential level, theme is what your story says about human nature.

It stands as the message behind every story we tell. If our cultural stories are essentially the wisdom of the elders telling the young people of the village what their lives are going to be like, theme is the lesson they are trying to impart…

… and it is always based upon a question.

All stories are basically an attempt to answer a central question which has meaning to the writer. In that way, we can see theme as the answer to the underlying question we inherently pose in our premise.

Some examples of central questions from classic films might be:

Alien: What can happen when one tries to use something inherently evil for profit?

Apocalypse Now: What are the effects of war on a man’s psyche? What kind of monsters can be found lurking within as a result?

Casablanca: Are there some causes so worth fighting for that even love should be sacrificed to fight for them?

The Breakfast Club: Is there anything beneath the face one shows to the world?

Ferris Bueller’s Day Off: What happens when you are no longer afraid of taking chances?

Dirty Dancing: Can innocence be rediscovered?

The Last Temptation of Christ: What does it mean to be fully human and humanly divine?

Even stories that we conceive of as mere entertainments have a central question contained within. And the success of a story from the audience’s point of view will depend upon how well that question is examined – but not whether the question is actually, definitively answered.

So, one might start the pre-writing process by asking:

Theme tends to be best reflected in how characters treat each other, and so a good place to start thinking about the theme of a work is in the conflict it depicts.

As an illustration, let’s breakdown a hypothetical short film idea.

We’ll call it A Mother’s Love, and it’s about a convict on Death Row seeing his mother just an hour before his execution.

“A murderer on Death Row meets with his estranged mother in the final hour of his life, in one last chance for each to make peace with both their pasts and their futures – before it’s too late.”

That’s the premise, but the theme – the real heart of the matter and the question I want to explore – is:

How does one forgive the monsters in one’s life?

In order to most easily attract a director, let’s create the simplest short possible, and the easiest and least expensive to shoot. To that end, there’ll be really only two characters – the mother and the son – and a basic location that consists of just an empty room. The story has an inherent clock on it (only a short time until the execution) and the setting, already familiar from television and movies, should set the scene quickly enough for the audience.

Sometimes, as I work to keep the plot and characterizations going, I find that my theme can get lost. It can be easy to lose track of both the overall theme and direction a story is going when you focus so intensely on the writing of the moment.

So, how do I make sure my central question (and thus my theme) gets explored throughout the story?

Answer: by continually asking this question of myself as I write: What do I honestly believe is true about this situation? Not cinematically true or “Hollywood true” and not even socially accepted as true, but true in my core belief about how the world works.

This will keep me on track.

I want to make sure that I bring the action and the emotions around to the thematic points on a regular, rhythmic basis; this helps to keep the audience engaged. By asking the above question as I write, a rhythm is created, constantly re-focusing my attention onto my theme.

So, let’s start the pre-writing process by creating several key images – or moments – in the story that I’ll want to make both iconic and dramatic. I’ll use the String of Pearls method to create these moments (you can learn all about this approach here ).

Note that we haven’t started scripting yet. Instead of trying to write the script from the very beginning, I’ll explore these moments first, and then later organize them around the story’s natural turning points (or plot points).

String of Pearls: An Alternative Way To Create a Story

I’ll tease the theme from the very beginning of the story.

Here is a perfect opportunity to put in a scene or a beat (depending on the length of the film) that sets up the theme for exploration. It can be as small as a single line of dialogue, or a silent visual beat, or something else, so long as it draws attention to a contrast from the very beginning.

Several possibilities occur to me:

Whatever I choose as my opening should contain within it the keys to the moment of climax.

I’ll articulate the theme near the end of Act One.

Now that I’ve teased the theme, I’ll put in a beat near the end of Act One that fully expresses it. Perhaps it’s through an action or dialogue, or it’s a question posed by one to the other. What’s important is that the theme itself is fully expressed, setting up the upcoming conflict.

Now that the awkwardness is broken, I think I want the mother to try to get her son to repent for all the evil that she’s believes he’s done.

She wants to provoke a reaction here, and he may react at this point – or not. Subtext is important here: It’s not just what’s not being said, but also what each is trying hard not to say that can be so important.

During Act Two, demonstrate the truth of the theme in an engaging way.

I want to increase the stakes here and heighten the tension as we get down to the truth behind our central question.

I personally believe that forgiveness requires understanding – and that requires an explanation. She wants him to explain to her something that she actually believes is beyond explanation. So, she must put the issue directly to him. (Remember this point – we’ll come back to it later)

At this point, we’ve posed the central question; the mother is trying to see whether forgiveness of this “monster” is possible. But it’s only half the question. If the son were to apologize now, the story would be over without the conflict and drama that the audience needs.

But we haven’t yet have explored the theme fully.

Develop a new element of the theme at the midpoint.

The midpoint calls for a change of direction, re-focusing the issue for the audience. We have yet to hear from the son.

So, now the question has been fully asked. We see both people – the son and the mother – feel exactly the same; they each, in their own way, blame the other for being the monster in their individual life. Did they create each other? Could one truly be possible without the other?

I now have to reconsider something I thought I believed in Moment #3 – that, for forgiveness to be possible, an explanation is required. But is that true? Does it really matter in the end?

And as they are blaming each other, the clock is ticking, so I’ll find a way for them to be reminded that they only have minutes left with one another.

So little time, so much more to say. The tension builds.

The countdown clock from Lost

Challenge the thematic question directly near the end of Act Two.

Have our characters reached the point where they are ready to change? They must now speak from the heart if they are ever going to do so.

As the writer, I’ve laid out the thematic question fully now. What answer did I find through writing this story? How will the story end?

Here are the possibilities I’ve considered:

Each option above makes for a radically different story and that why it’s so vital to explore what you truly believe throughout the writing process. When you do that, the authenticity of the story will leave the audience with something real to think about on their way home – and wasn’t that what we were after from the beginning?

In the Climax, the premise is fully realized – the question is answered one way or the other.

At the end of the story, two things are certain: the son will be taken away to die and the mother will be left alone. I’ll put a silent beat somewhere near the end that echoes the opening scene, bringing everything full circle for the audience.

Give It a Try

What story choices would you make? See what kind of story you can write with these thematic moments; I’m sure they will be much different than mine.

These are the steps to consider as you develop the themes in your next work. If you’re honest with yourself throughout, the climax of your story will tell you something new about the way you think about people.

And that’s what makes for a great story.

If you found this article useful, why not check out Art’s latest screenwriting resource: MasteryPlus?