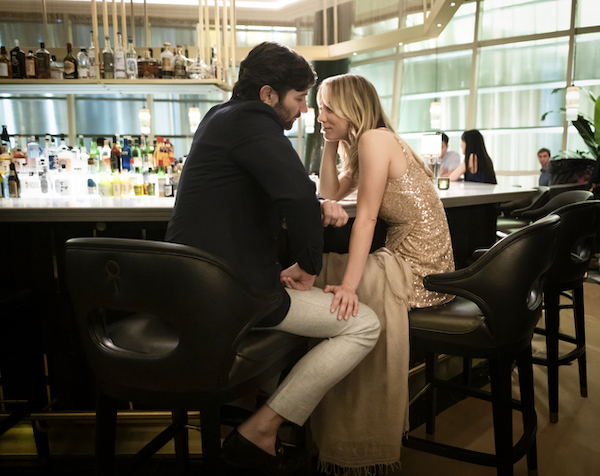 Prolific TV writer Steve Yockey (Supernatural) was offered the novel The Flight Attendant by Chris Bohjalian as a potential open writing assignment. Kaley Cuoco (The Big Bang Theory) who plays the lead Cassie Bowden had already optioned the rights to the book and powerhouse producer Greg Berlanti (The Flash) was onboard with this darkly comedic thriller. Yockey went to work to develop the novel into a limited series. The story opens in a hotel room with Cassie waking up to a dead body, Alex Sokolov (Michiel Huisman). The tension, intrigue, and stakes are immediately slammed into over-drive as questions arise.

“I loved how Chris Bohjalian creates a sense of claustrophobia with Cassie,” said Yockey of the novel. She’s in a hotel room, terrified that she’s going to be blamed for the murder or even be killed herself,” he continued. “I responded to the walls closing in around her.” The book was a straight up thriller, but a large part of Yockey’s work was to inject “humor and spectacle” into the TV series.

There’s a palpable sense of anxiety and tension with Cassie, who hasn’t made the best life choices. “You can really get inside her head and feel her panic, fear, and regret.” Capturing these elements of Cassie’s character were a formidable task for the writer as he figured out how to present her state of mind in the screen, or “getting from the inside, out” since so much of the book is internalized and centered on her thoughts.

Once he settled on the frenetic energy and breakneck pace of the TV series, Steve Yockey concentrated on exploring Cassie’s point of view, “Who she was and what she could be.” The role of Miranda Croft (Michelle Gomez) who provided much of the backstory as her partner in crime was largely reduced, compared to the book.

The Flight Attendant traverses a smorgasbord of genre terrains ranging from espionage, drama, comedy, and farce. “I see it a as a bit of Alfred Hitchcock through a Brian De Palma lens.” Yockey relishes these genre mashups because it results in massive tonal shifts. But these tonal junctures serve a specific story purpose. “You couldn’t tell this psychological thriller without the comedic elements.”

Many successful TV writers have come from a playwriting background. We asked Steve Yockey how this informed his TV writing. “I approach story in terms of emotion, beginning, middle, and end, and theatricality. I want to keep things moving.” Theatricality and visualization are key components in Yockey’s storytelling. Someone sitting on a chair in a play won’t make for very good television. He’s always trying to figure out an exciting visual element or something that can catch the audience off guard when writing for the screen. This allows audiences to open up and experience the story in a particular way. Visualization is metaphorically expressed physically on the stage. That is the key difference between the two platforms.

Cassie is a highly flawed character, suffering from self-inflicted wounds due to her excessive drinking and indiscriminate sleeping around. She’s also dealing with traumas which manifest in her reckless behavior.

Yockey describes her as a “tragic heroine who is trying to do good but causes bad things to happen all around her.”

Despite her chaotic behavior, “Cassie operates from a place of kindness.” This goes a long way in helping the audience invest in her and follow her journey. Steve focused on making the writers understand Cassie’s choice, so even if the audience disagrees with them, they can still be sympathetic towards her. “The show works overtime to not tell you she’s making bad decisions,” iterated the writer.

Knowing that Kaley Cuoco was playing Cassie before Yockey came onboard allowed him and his writing team to explore the darkest crevices of her character and to contrast them against her effervescent, carefree attitude in life.

Cuoco is interested in characters like Cassie, who are put through their paces and eventually forced to grow. Kaley wanted to put Cassie on a journey. Yockey believes, “I want the audience to have the longest journey,” so the implications of her journey extend beyond the TV series.

In the book, Cassie is aware that her life is hanging by a thread and tries to make positive changes with varying success. In comparison, the TV version of Cassie is generally happy with her life and not fully aware of (and doesn’t want to be) the downward spiral she’s in. She can’t form meaningful relationships, nor does she realize her party lifestyle is unsustainable. “She has a lot further to fall in the television show. This gives Kaley more character to play and puts Cassie on a longer, more fulfilling journey.”

As a high-functioning alcoholic, Cassie faces memory distortions as she constructs favorable memories of her father. “She needs to feel her father was a good guy to rationalize her culpability in his death. She has reimagined her childhood in a positive way although he let her drink freely.” This forces her to reassess these distortions and process her trauma after waking up to a dead man.

Cassie’s journey is only partially complete. During the series, she goes on a journey to recovery and leads her to a specific point far from being healed. “We watch her going through the grind house of recognizing problems she needs to address as she moves to becoming a new person.”

Crime thrillers generally plot heavy and face the task of presenting clues and the vital information the audience in a measured way. The Flight Attendant is no different. Audiences need to be given information in a timely manner. This is done in the series via Cassie’s relentless appetite for finding out what happened and Miranda to answer her questions. “The best kind of exposition is ammunition,” proclaimed Yockey. “If you can get information out of characters’ mouths in a fight or some other charged way, it’s more effective than through a simple conversation. You never take your foot off the gas.”

Yockey continued, “We were very careful about our car turns in the writers’ room. If the audience didn’t need to know about a piece of the plot at that time, we held it back. The pacing was very deliberate.”

Balancing exposition with character development formed a large part of the discussions in the TV writers’ room. There has also extensive debate about the level of Cassie’s drinking as an alcoholic with regard to the story. “We discussed how much would could responsibly get away with.” The writers also researched the nature of PTSD and how that might play out in Cassie’s life. “We looked for dialogue that was respectful to the conditions, but still exciting.”

The novel of The Flight Attendant has been fully mined into eight episodes of season 1. Yockey and his team are crafting a new season that takes place in Cassie’s world as she navigates her path to recovery. “Her life keeps moving forward as she hangs on to her emotional truth during her recovery.” Cassie has reached a point were she has to honor her personal fidelity and stop lying to herself about her behavior. Having fun has its limits. In keeping true to the tone of the series, there will also be a ‘Hitchcockian’ inspired mystery for her to get caught up in.