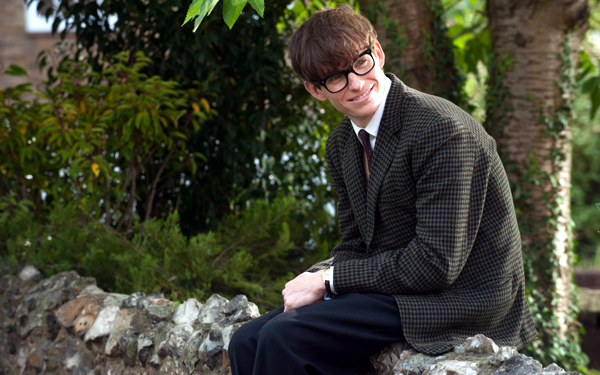 The Theory of Everything: “Three Movies in One”

Stephen Hawking’s rise to become the godfather of modern astrophysics–despite his physical limitations, is the stuff of legend. In writing and producing the acclaimed biopic The Theory of Everything, New Zealander Anthony McCarten clearly took a page from Hawking’s stop-at-nothing playbook.

McCarten’s journey began in 2004, when he paid a surprise visit to Hawking’s first wife Jane, on whose memoir Travelling to Infinity: My Life with Stephen, the film is based. But it took years of spec scripts and persuasion before Jane agreed to option her property to McCarten, who then hustled to find financing–finally partnering with Britain’s Working Title Films in 2012.

Travelling to Infinity, by Jane Hawking

The story takes us from Hawking’s early days as a healthy Cambridge University student, to the diagnosis of his amyotrophic lateral sclerosis (ALS), to the publication of his seminal bestseller A Brief History of Time.

Above all, Theory is a love story between Stephen and Jane—delicately played by Felicity Jones with an unvarnished honesty that more than justifies her Best Actress Oscar nod. Just watch her fresh-faced Jane take an instant shine to Hawking’s shy grad student, and insist on marrying him, despite learning he has only two years to live. Would she have made the same choices had she known Hawking would defy the odds, and live to this day?

Of the universe’s many mysteries, McCarten knows that love is one of the most mysterious. Also an accomplished playwright and poet, McCarten spoke with Creative Screenwriting about this and other big picture questions.

The Theory of Everything features many “show-don’t-tell” moments, like when Stephen Hawking’s hand tremors when he’s serving roasted potatoes at dinner. How exacting were you in describing the physicality of these movements?

Pretty specific. I always think the writer is the first director, and that you need to know how to tell the story in terms of action, as well. It’s often thought that if it’s not dialogue, the director came up with it. But you really do have to imagine it all when you’re doing a screenplay, and that was part of the joy and the challenge of this particular script, because more than anything else I’ve ever done, this was non-verbal. This was a love story, where at a certain point, one half of the love story can barely speak and can’t move at all. So it was incumbent on me to embrace the whole concept of telling that story in a passionate and involving way, without using tools like dialogue. For example, there was a line in the script where Stephen wants to embrace Jane, but he can’t do anything like that. She’s across the room with her back turned, and all he has is “forward” and “reverse” on his wheelchair. In the script, I say: “He nudges her like a pony nudging its rider.” And Eddie [Redmayne] said this description was really quite important in unlocking the spirit of a man who desperately yearns to express himself in a normal way, but cannot. The internalization of all of those frustrations was something Eddie felt he could really play with.

A Brief History of Time, by Stephen Hawking

How esoteric did you strive to be when describing things like space-time singularity, quantum mechanics, the Theory of Relativity and other complex scientific ideas?

I wanted to get to a point of understanding where I could grasp it myself, in a way that would allow me to find visual metaphors for these very esoteric ideas. Reading A Brief History of Time was a starting point, but then I researched secondary texts, so I got a sense of all of Stephen’s major discoveries. Then the challenge was to find interesting cinematic ways to express them.

One of my early impulses was to not have physicists explain physics. I would have laypeople like you and I, doing their best–even somewhat clumsily, to try and grasp these ideas. That’s where the scene came from when Jane is explaining what Stephen’s working on, using food on the dinner plate. It would have been very easy to have a physicist do that scene with a blackboard, and dazzle us with numbers and formula, but all we would walk away with was how clever physicists are. My intention was to have much more fun, and even give the audience something they could take home, by distilling it into things as pedestrian as a pea and a potato, to describe quantum mechanics and relativity. Or the froth in a pint of beer, for example. There’s a lot to do with the idea of spirals.

Did your poetry background aid your ability to come up with these interesting visual representations, like Stephen using cream in his coffee to create a swirling effect that reverses, to suggest his burgeoning idea that time has a beginning?

Let’s be very clear: that was a homage to Godard. There’s a scene in one of his great movies with cream going into a cup of coffee that’s very suggestive of a spiral galaxy. When we tried to find visual ways to wind back time, that spiral became a key representational image. One of the first ideas I made implicit in the script was that it would be about time and an exploration of what happened at the first moment of the universe, and I knew the movie should end with the whole movie going in reverse. As often happens, once you know the ending, it kind of instructs you on how to proceed from the beginning. These things were placed into the script and then embraced by Eddie and Felicity. They have a moment that they contrived–which wasn’t in the original script, when Stephen’s explaining to Jane his first idea that the universe might have been born out of a black hole, and they started spinning around and holding each other, and physically giving us a playful sense of winding. One you’ve established a system of imagery, everybody can use it as a launch pad.

There’s a scene after A Brief History of Time became a phenomenon when Stephen is lecturing to a group of people, and he has a vision of standing up to help a women pick up her pen. What was your thinking in incorporating this moment?

I wanted to show that during this wonderful celebration—an almost pinnacle moment of his life, when he’s enjoying his greatest success and global admiration and love, that there was still a man in that chair, who would give it all away if he could get out of that chair, walk across the room, pick up a pen, and give it to the young lady who had just dropped it. Without undercutting any pretentious sentimentality of that scene, my concept was to really bring us home to the extraordinary sacrifice he’s had to endure, to get to this point. Somewhere in my head was this idea that Stephen Hawking had made some sort of wager, that in return for being able to perceive the mysteries of the universe, he had to surrender his body.

Was it hard to negotiate how much of Hawking’s physical struggle to show, while still keeping the audience on board with is journey?

Back in 2004, when I traveled to see Jane that first afternoon, seeking her permission to make this movie—permission which took eight years to get, on that day I drew a sketch of a triple helix on a piece of paper, and presented this concept to her, that this movie would be three movies in one. It would have the story of Stephen’s breakthroughs in science, it would be a one-of-a-kind love story with unusual problems and unorthodox solutions, and thirdly, it would be the story of Stephen’s and Jane’s battle with this brutal disease, with Stephen going from a completely healthy young man, to relying on one walking stick, to two walking sticks, to a wheelchair, then to an electric wheelchair, then losing his voice, and then we’re left with the iconic Stephen Hawking that we have today, who can barely move a voluntary muscle in his body. Those demarcations were clear to us.

Since you were so intimate with this material, did you ever contemplate directing this film–especially since you have previous directing experience?

Yeah, I did. If you talked to me ten years ago, I would have presented an ambition to be an auteur and direct this myself. I’ve since started to manage my ego better. I realized that what I fundamentally do best, is write, and I think the world would agree with that. It doesn’t mean I wouldn’t want to direct something at some future point, but for the next couple of years, I’m going to focus completely on the writing, and opportunities are opening up to me right now that weren’t twelve months ago.

After this experience, did you personally come away with any epiphanies about some of the bigger questions about God and love and purpose?

(Laughs) I did walk away with the very strong impression that if you could keep a sense of humor and keep an active mind, you can endure almost any setback.

What was your reaction to first seeing a cut of the film?