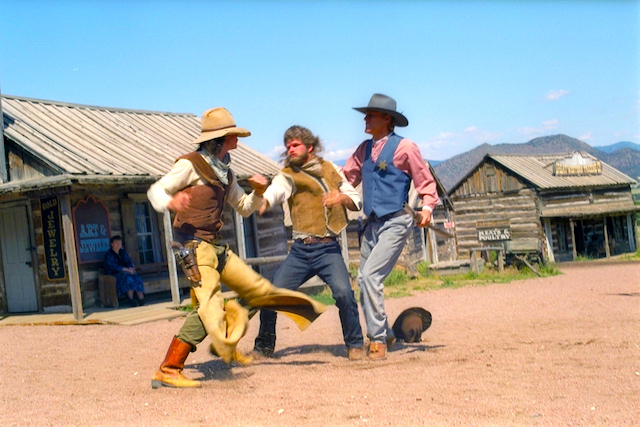 Like generating drama, exploring theme is a primary function of any story, but why is it so important?

From Terrence Malick to Marvel, every cinematic story strives for audience involvement. For markets broad and niche, making people care is the name of the game. The most rudimentary method of captivating an audience is with dramatic conflict. Not discounting the draw of unique and fascinating characters, but when it comes to generating drama, protagonists are simply beings faced with a difficult problem to solve.

A protagonist’s struggle to endure, overcome, or achieve something of significance is almost always the story’s primary source of dramatic conflict. When finely-tuned, the four working parts of that struggle (protagonist, goal, antagonism, stakes) can help to generate tension for the audience by convincingly posing and sustaining a dramatic question:

Will the protagonist achieve their goal, or not?

Clever concepts, intriguing characters and fresh deliveries of genre staples work wonders for audience involvement, but nothing engages us like dramatic tension. And yet scripts that possess all of the above, and more, while having nothing to say as a whole tend to feel perfunctory.  That’s why theme is so fundamentally important.

I sometimes urge writers to differentiate between drama and theme by asking:

What is your story about?

Responses usually encapsulate the protagonist’s motivated struggle against antagonism to solve a difficult predicament. I’ll then ask: what’s your story really about? The more contemplative answers will delve into a resonant issue, experience of life, or aspect of our nature that, all too often, the story wants to explore but seldom does, commonly highlighting an underdeveloped thematic conflict.

Simply put, thematic conflict is an implied battle of ideas. While pursuing their respective goals, characters (protagonist vs antagonist) can represent opposing philosophies and incompatible worldviews concerning the story’s main theme. As characters clash, so do their philosophies.

In the end, how the thematic conflict gets resolved can express a story’s meaning. Unfortunately, the demand to deliver surprising and satisfying endings will frequently come at the expense of that meaning. Or, a script will feature only one philosophy on its main theme, making for a preachy story. Achieving harmony between dramatic conflict and thematic conflict is difficult, but vital for meaningful work.

Whether you prefer to approach it at the premise stage or you discover it in early drafts, defining the main theme is fairly pivotal. In certain scripts it can be defined as the story’s subject matter (e.g. war, intolerance, loss of innocence), but more universally, the main theme is the particular human value at the core of the protagonist’s inner journey (e.g. compassion, honesty, courage).

Steve Jobs is about a guy dealing with multiple interpersonal conflicts while preparing three iconic computer product launches (drama). But it’s really about a perfectionist struggling to accept that he’s poorly made, relating particularly to fatherhood (theme).

Nailing down the moral value or issue at the heart of a story provides a touchstone for the development of all other elements – as they ought to be facilitating the story’s exploration of that theme.

This is very true of the main characters. Knowing the theme is vital when it comes to honing characters’ contrasting philosophies: the worldviews signified in their decisions, choices, and actions under pressure.

Conflict between characters (or within a character) is how themes are explored. Having a protagonist and antagonist personify opposing philosophies on the main theme means that the way in which they undertake their journeys, how they pursue their respective goals, should offer readers and viewers an unspoken but meaningful debate on that main theme.

Characters’ advances and setbacks against each other are opportunities to show how and why their philosophies are strong, weak, good, bad, effective and ineffective. This allows a story to examine the pros and cons of its central theme while also adding weight and meaning to the ‘protagonist vs. antagonism conflict’.

It’s important for characters’ worldviews to be well-matched. If you want your script to convey a point that you passionately want to share with the world – then your story should at least contain a very good, credible counterargument. Leo Tolstoy wrote: “the story leaves a deeper impression when it is impossible to tell which side the author is on.” Like dramatic conflict, there really ought to be genuine uncertainty about the outcome: which philosophy will prevail, and why?

Stories with only one take on their main theme are foregoing the debate necessary to explore it or to arrive at any real insight. Combining such limited scope with a protagonist whose philosophy is stated more in dialogue than implied by their actions can result in a thematically one-sided story Ad Astra which, in terms of its thematic exploration, risks being as uninvolving as watching a fixed fight.

Setting equally-strong truths against each other in a way which means there can only be one winner energizes a story with value and meaning.

Deepening a thematic exploration relies on subplots and other relationships. Readers value B-story conflicts and secondary characters that clearly contribute dramatic tension, but which also earn their place thematically. A protagonist’s relationship with a supporting character or the conflict in a subplot is able to expand the story’s battle of ideas by examining another facet of the main theme, or by inverting the main debate, or simply by giving the thematic question new context.

B-story conflicts and the struggles of secondary characters can add relevant depth and perspective, but that need not be their only contribution. Plots and subplots should speak to each other with thematic relevance. A subplot relationship, for instance, may well yield a nugget of truth that causes the protagonist to alter or evolve their philosophy on the main theme.

Not every character arcs, but those who do undergo a shift in their worldview or understanding concerning the main theme. For example, in Saving Mr. Banks, having been badly failed by her father, mother, and aunt during her formative years, skeptical protagonist P.L. Travers is resistant and fearful (flawed philosophy) of placing trust in others (theme). In pursuit of her story goal, safeguarding her treasured Mary Poppins from a frivolous adaptation, P.L. Travers enters into a creative battle with Walt Disney who embodies an opposing, more optimistic, worldview.