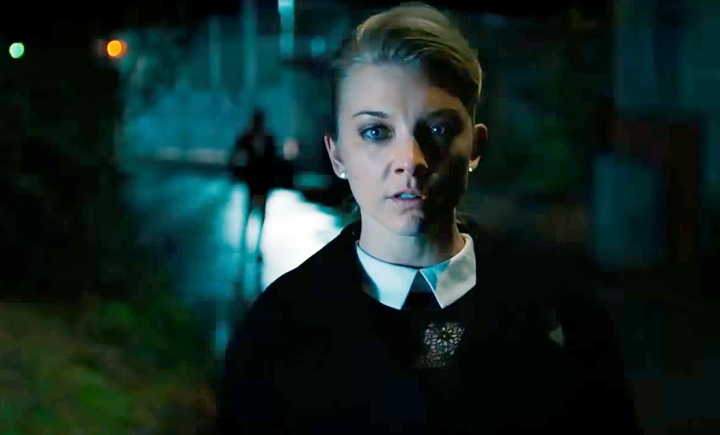 You all remember Natalie Dormer, the versatile British actress from Game Of Thrones, Hunger Games and The Tudors. After a long gestation period, she finally makes her screenwriting debut with her taught thriller, In Darkness.

Ever since James Stewart wiled away his hours spying on a murderer across his courtyard in 1954’s “Rear Window”, there have been a plethora of films where an innocent bystander witnesses a murder from the confines of their apartment. The premise of the new thriller “In Darkness” looks all too recognizable at first. An apartment dweller, this time a blind pianist named Sofia, observes murderous shenanigans in her building and in turn, becomes threatened as well. This take, however, is much more ambitious than the majority of stories that riff on Hitchcock. In fact, there’s a whole lot more to this one than meets the eye.

The two ambitious talents at the helm of “In Darkness” both pull double-duty. Star Natalie Dormer plays Sofia and is one of the screenplay’s authors as well. Dormer’s co-writer is Anthony Byrne, who happens to be the film’s director too, not to mention her longtime fiancé. (They met during the making of “The Tudors” in 2007 when she starred in that TV series as Ann Boleyn.) This is clearly a passion project for both of them, and their passion is on display in each and every frame.

For starters, the movie looks exquisite, twice as expensive as its modest budget. Byrne has his cinematographer Si Bell shoot everything crisp and clean, echoing the style of Sofia’s character. Her clothing is fashionable, yet miles from frilly. The townhouse apartment is designed to the T, yet decorated sparingly. And her whole world is configured to overcome her handicap. The keys go in a specific bowl, her collapsible cane remains stored on the same specific ledge, and everything is in order in the cupboards. Her world is precise and wholly within her control.

What Sofia can’t control is the chaos of her neighbor in the apartment above. Veronique (Emily Ratajkwoski) is a troubled and noisy young woman, prone to loud arguments with her boyfriend. Sofia can’t make out all that they are saying, but it keeps her up at night. She befriends the frenzied girl, and even ends up slated to play piano at a party for Veronique’s father. But before the friendship can deepen Veronique falls from her third story window one evening. Sofia is the ear witness the police must rely on to help start putting the pieces of Veronique’s puzzling death together. Was it murder? Suicide? Or something far more complicated?

Detective Mills (Neil Maskell) shows up on Sofia’s doorstep, and despite his shambling and disheveled style, he’s clever enough to know that there’s more to it all then she’s telling. Not long after, Sofia is targeted by contemporaries of Veronique, wanting information on a jump drive that’s disappeared. Key among them is brooding boyfriend Marc (Ed Skrein), not far off the Euro-trash type he played in 2016’s “Deadpool.” Of course, he’s also drawn to Sofia since she’s such a strong and capable woman, displaying some of the same fire and edge as his ex.

When Sofia attends that party to play the piano, it ends up being more of a memorial service for Veronique than a fundraising event for her political father Radic (Jan Bijvoet). He’s charming in a slick, Bond villain kind of way, and he’s a suspected Serbian war criminal with an extremely vicious past. Marc and his snide sister Alex (Joely Richardson) also show up to keep their eyeson Sofia, and Richardson clearly delights in playing against type as a baddie. She slinks around the room in a Mata Hari wig, clacking her heels and posing with relish, all the while delivering her lines as if they’re oozing out of her.

At this point, the story starts to twist and turn way beyond the innocent bystander plot. It turns out that all the players have a wicked past, and even Sofia is harboring heavy secrets. It turns into a rollercoaster ride where bad characters turn good, fingers get broken, poison-filled amulets are crushed, and limousine rides become reasons to call Uber next time. Some of the story beatsborder on the ludicrous, but Byrne and Dormer make it all frothy and fun.

Dormer shines too as Sofia, in her best role since Boleyn. She’s got one of the best glares in Hollywood, and she uses it to great effect throughout. Dormer also shows off a beautifully touching vulnerability. Rarely has she ever been so put-upon onscreen, nor has so much been demanded of her physically. Here she runs, fights, gets tortured, and even writhes on top in a sweaty sex scene embellished by her fascinating body ink. Most impressively, Dormer resists the hamminess that consumes so many actors attempting to portray the blind. Her gaze even finds those she’s talking to in a scene, rather than the cliched way of looking three feet away from them, off in the distance.

The final reveal may have you scratching your head, but damn if Byrne and Dormer don’t pull it off with aplomb. Odds are a small but effective thriller like this might get lost amongst all the tentpoles this summer. It will likely find a solid audience in home rentals in a few months, but it’s a crackerjack potboiler worth looking for in the theaters right now.