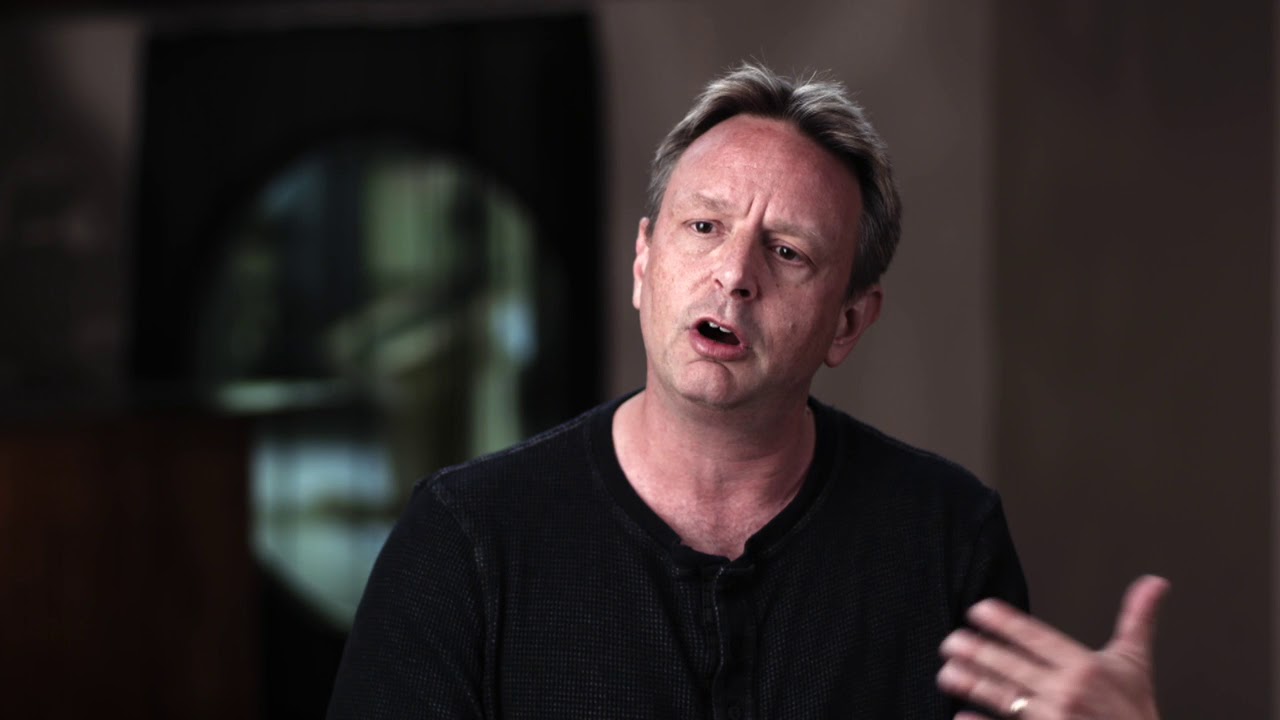 “I Thought I Was The Music But I Am The Radio.” Dean Georgaris Talks ‘The Meg,’ ‘The Manchurian Candidate’ & ‘Paycheck’

Creative Screenwrting Magazine was lucky enough to meet with screenwriter Dean Georgaris and discuss his thoughts on the film industry.

Dean Georgaris defines himself as a “Searcher.” With credits such as Paycheck, The Manchurian Candidate, Tristan & Isolde and The Brave, the screenwriter’s latest project The Meg feels somewhat off-brand, but Georgaris believes this is really just a function of the changing industry.

When asked about his writing style he said  “I tend to think of myself as a very thematic and a character-driven writer wrapped up in a popcorn package. Not everything I do is popcorn, but I’ve been brought on to bigger movies and my goal is to humanize them and try to really understand what I think they’re about.”

Most of the screenwriter’s jobs aren’t listed on IMDB. As a script doctor, he found steady work for many years, but also had to balance significant issues of depression in the early 2000s. “As a writer, that can be quite challenging,” said Georgaris. “It got to the point in 2008 where I just couldn’t work anymore.”

The screenwriter took a few years off as somewhat of a reset. But, taking time off in Hollywood essentially pushes a writer off the shortlist back to the beginner level. “Your name has fallen out of circulation,” added Georgaris. Rather than look for open assignments from studios, he started to be more entrepreneurial as a writer.

“I started looking for projects that could be something, but that people weren’t that interested in,” he added as he planned his reintegration into the film industry. Eventually, a draft of The Meg came across his desk and his world changed.

Bringing The Meg To Surface

The screenwriter saw a “great classic, Hollywood, action adventure movie” within the pages of The Meg. Based on this first read through, he felt like it could be in the tone of James Cameron-serious, or more light-hearted and playful. He chose a hybrid of the two. The basic hook was that prehistoric life could live beneath a barrier of cold water in the ocean.

Georgaris saw potential in the screenplay and knew he could come in and put in the work to make unexcited studio heads excited about the story. His plan worked. In 2014, he came on to work on the project. His pitch to get him hired was to keep the core idea, but change the entire project, which was originally based on Steve Alten’s horror sci-fi novel.

Since studio producers were not supporting the movie, Georgaris felt like he had more creative freedom within the first few drafts.

What’s perhaps more interesting, however, is that his writing style and attitude had somewhat changed since treating depression. His original stories all involved a protagonist unhappy with his or her life.

“Take the script for Paycheck, which is quite different from the finished film. The central idea was: here’s a man who is willing to have most of his memories erased in return for cash. I thought to myself, ‘What kind of person would celebrate an existence where all they remember is the weekends and they don’t care about the weekdays?’” Such a person denied himself the full range of the human experience, and was somehow incomplete.

Likewise, within the screenplay for The Manchurian Candidate, Denzel Washington’s character, Ben Marco “had a fall from grace and assumed it was because of his own shortcomings.” It wasn’t until much later that the character realized there could be outside forces leading to his demise. This is similar to Georgaris’ acceptance of depression diagnosis.

In hindsight, Georgaris views these films as pre-awareness of his depression. “I find that my writing was often trying to work out those feelings I was experiencing.” He felt grateful for his writing work, but also unsatisfied in life. As a writer, he was somewhat anxious and unable to sit at his computer to work. He needed pressure to deliver.

Since treating his depression, he understands the anxiety has nothing to do with his creativity. “I thought I was the music and now when I write I think of myself as the radio. In other words, the music is out there in the universe and I just need to tune into it. That’s a more reassuring feeling when you have one of those days when nothing is coming.”

Once Georgaris created the proper shift in his mindset, he made the crucial decision to become more entrepreneurial as a screenwriter. Then, he told the people around him his plans to make sure the right opportunities would cross his path.

“I had conversations with lawyers, agents, managers, where I said, ‘I want you to think of me for things you may not have otherwise thought of me for,’” quipped Georgaris. This meant going against some of the social norms for Hollywood screenwriters and tossing more irons into the fire.

He told colleagues, “’I’m willing to do extra work for these projects. I’m not afraid to take extra meetings.’ In Hollywood screenwriting, there’s this attitude of ‘Don’t do anything more than you have to’ or ‘Don’t compete for the job if you don’t have to,’ and I decided that’s a disservice to screenwriters and the stories being told.”

“Screenwriters need to think like producers. They need to be open to reading tons of books,” he added. “I consider it my job to always be telling [my representatives] what I would like to do next.” Georgaris believes this “minimum effort” mindset came from representatives trying to protect their clients from disappointment and the vagaries of the film industry.

He said they think: “If my client goes up for five jobs in a row and doesn’t get them, is my client going to say, ‘What’s wrong with my agent?’” mused the screenwriter. “It comes from a place of wanting to protect talent from disappointment. We’re all thicker-skinned than they think. I’ve never been haunting by not getting a job because someone else had a better idea. Those are easy jobs to not-get.”

When Warner Brothers came on board for The Meg, they attached Eli Roth (Hostel, Death Wish) to the project. Georgaris and Roth worked on it for about a year. Many of the big ideas came from Roth, but he’s uncredited on the final project. When Roth left, the studio brought in director Jon Turteltaub (National Treasure, Phenomenon) and the writing duo, Jon and Erich Hoeber (Red, Battleship).

At this point, the group of writers and directors were also taking notes from both Warner Brothers and companies within the Chinese film industry. Eventually, they decided to have Georgaris join forces with the Hoebers. It was “like a TV writing room.” For the final three months, the trio worked collaboratively on the project.

“Every time we were writing on the movie, we were always considering the audiences’ sensibility,” said Georgaris about expectations of the Chinese box office. “The Chinese producers had a tone that they were looking for. They knew there were Chinese characters in the story. They were concerned that the characters didn’t fall into stereotypes.”

This also discussed the dynamics of father-daughter relationships in terms of Chinese culture. In the film, Bingbing Li stars as Suyin, Winston Chao as Zhang, and Shya Sophia Cai as Meiying. But, all in all, The Meg was already set up to please international audiences, in terms of the large scale action-adventure story.

At the same time, Georgaris didn’t want to make another “shark movie.” According to the screenwriter, he thought of it more as a monster movie than a shark movie. He was intrigued by the deep-sea action adventure and would compare it to the suspense and mystery of Spielberg’s Jurassic Park or James Cameron’s Aliens.

It wasn’t until late in the process that the directors and co-writers went through the script to make sure they hadn’t just made another “shark movie.” That said, there are certain things that almost had to happen. “People are going to be eaten, people are in the water, that’s like gunfire and car chases in an action movie. So we thought, what can we do with a 70-foot shark that’s different than other shark movies?”

“There are times when it feels like nothing is under a screenwriter’s control at all. One of the most common mistakes is the opposite, when they try to control too much,” said Georgaris. The screenwriter added that often, writers try to anticipate notes and alter scripts in the wrong direction or dodge notes in a disingenuous way.

Georgaris said that his biggest misconception as a screenwriter was getting the script right meant producers can’t keep changing it. He believed there was a point of no return with his draft, which simply wasn’t true. “I came along thinking, ‘Well, I’ll write them so well that they won’t change them,” he laughed.

Screemwriters should focus on things they can control. “Writers should be the best collaborators they can be. It’s better for a writer to call a producer and say, ‘The script is going well here, but not there’… and just be honest. It’s better to collaborate. It’s better to trust. If you go back to the fact and remember, ‘I love writing. My job is to write. My job is not to necessarily think about this being a hit or a flop. My job is not to think about whether or not this is going to make me famous or win me an Oscar. My job is write the best draft I can, right now.’”

During Georgaris’ time off, these thoughts are what guided him in the right direction for a successful comeback. “It’s easy when the phone is ringing to get caught up in all of the excitements or perks. But the reality is that your job is to be excited about what you’re doing. Come back and focus on that.”

“The truth is, you don’t have much control over a screenplay once you’ve written it. Sometimes, scripts make it through unchanged and turn into these beautiful movies. We celebrate that one got through, but oftentimes they don’t. They change quite a bit. But, that’s the reality of the big-studio business. Holding on tight doesn’t do anything for you.”

That said, as the screenwriter became more transparent, he found that the business started to treat him better. This meant taking everything one day at a time or even one note at a time. Doing so, he moved away from those writers who feel that certain aspects of the notes process are “miserable.”

Instead, he acknowledged that thinking about writing isn’t the best phase, but the actual writing process is enjoyable. “I think that’s probably my biggest surprise as a screenwriter. I used to think the writing was the suffering, but I really don’t believe that anymore. I think a lot of us are duked into thinking that.”

In addition to the proper mindset, the screenwriter works to stay relevant and vibrant by following his passions. “If you love a certain genre, write that genre… and if they’re not making those movies, be willing to go into television. We’re at an interesting point as writers with burgeoining opportunities. It used to be your only write for  film and for TV if you couldn’t get hired to write a movie script. But now both are considered equally meritorious, along with [shorts on the] web.”

The screenwriter concluded, “I tell people, someone is going to be the Orson Welles of 11-minute stories. You stay relevant as a screenwriter by finding the right place for the kind of stuff you want… and don’t be afraid to go there. Don’t try to get Disney to make a $70-million dollar adult character drama. That’s not their business model and I understand that and respect that. Think like an independent filmmaker and recalibrate it to be a $5 million idea with a suitable producer.”