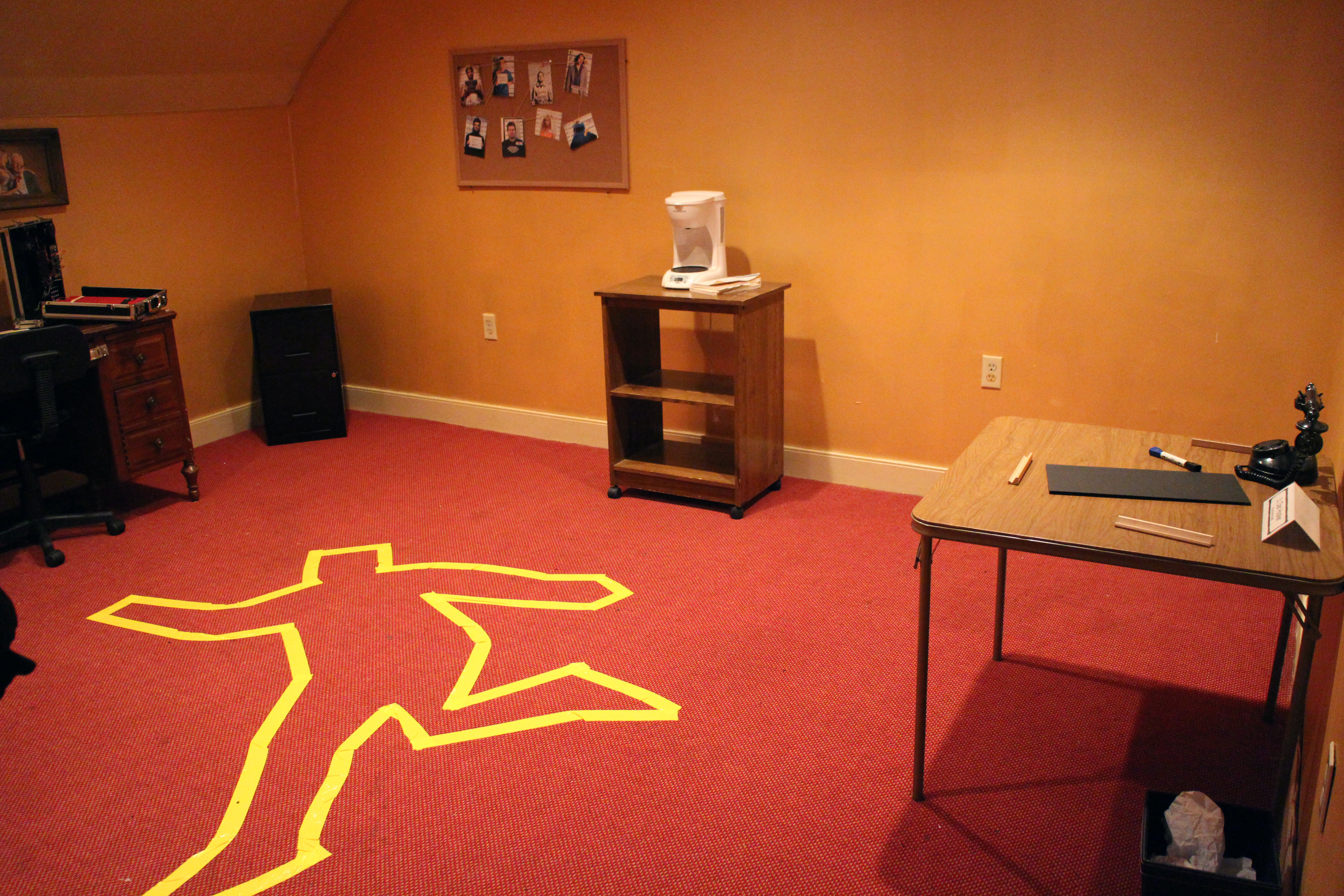 For the Thrill of It All. Writing Escape Room Narratives as Contained Thrillers

So, What’s an Escape Room, and Why Should You Care? Content creator, Joey Madia, explains what Escape Rooms are and how to weave them into your stories to Creative Screenwriting Magazine.

I understand the question. You’re a screenwriter, or you write for TV or a web series. Why would you want to know about Escape Rooms?

Why is this article even in a screenwriting magazine?

Put simply, Escape Rooms need your skills. In just a few decades they have progressed from locked single-room spaces where players solved puzzles to find a key or otherwise unlock a door, to story-driven, multi-media-enhanced period, or genre sets. Some even use non-player characters.

And many live or die on the principals of the classic contained thriller.

But don’t take my word for it. There are lots of online resources (mass-market companies, franchises, local businesses, and social network groups) where you can learn the basics. There’s s a good chance you live within half an hour’s drive of an Escape Room. There are now over 2,000 of them in the United States and that number is growing every day.

The types of Escape Rooms vary. Some are still simple and revolve around the original notion of getting out of the room as the sole goal. Some are high-budget productions that build a lot of immersion into the experience (the so-called 2.0 rooms; those are the ones I’ll be talking about here); and some are used for training staff and high-level specialists.

A company I write narratives for is in negotiations to design Escape Rooms to train computer specialists at a prestigious technical college and a U.S. government agency.

Escape Rooms are for real, and for 2.0 experiences, they need your storytelling skills. Especially if you can write a gripping contained thriller.

As you know, there are many templates available for writing thrillers, contained or not. I have my favorites, and I’m sure you have yours. The better you can use them, the more valuable you become in the Escape Room 2.0 universe.

For those who may be unfamiliar with the term contained thriller, it is one where there is a single location in which the main characters are trapped. Think Saw or Panic Room. The classic Agatha Christie stories, like Murder on the Orient Express, are contained thrillers.

Like with any story, you first need to set the stakes:

All of these questions are governed by the rules of the 2.0 Escape Room. Players have an hour to get out of the room, solve a mystery, find a hidden item, or prevent a disaster. That’s how they win. That’s the goal. Once the clock shows 0:00 (and all good Escape Rooms prominently display a clock; time is the primary driver) and the goal hasn’t been achieved, the players have lost.

How hard they take the losses or celebrate the wins determines the success of your story.

So the stakes have to be high. We obviously can’t kill people—or poison or otherwise injure them—but we can make them believe the stakes are comparably high.

The willing suspension of disbelief, Coleridge called it. It takes a helluva writer to get that done.

The built-in rewards are bragging rights for beating the game, a photo with the winning time that is posted all over social media, and sometimes prizes for the best time.

One of the main theorists behind Escape Rooms, Scott Nicholson, calls the aftermath of a successful experience “frothing”—a ritual where the players gather at a nearby coffee house or in the Escape Room facility’s lobby and relive the experience, beat by beat, twist by twist, reveal by reveal.

Sound familiar? That’s what all screenwriters and TV writers want for their work. It used to be called “water-cooler TV.” JJ Abrams has made a career from it.

The Ticking Clock vs. Player Options

Everything in an Escape Room happens at lightning speed. An hour goes by in the blink of an eye. It’s relentless—that’s the fun of it. Which means you have to do your world-building in a hurry.

Genre and time period are done visually, just like in film and TV. The rules, as I just covered, are by and large set by the parameters of Escape Room culture.

So your primary responsibility, once they enter the room, is to immerse them right into the narrative.

The “bomb under the desk,” that tried and true trope, or some variant, is at your service when writing the contained thriller, so use it to best advantage. Once the players know the goal (e.g., defuse the bomb, find the antidote, stop the chamber-flooding mechanism), give them decision points all through the narrative.

Keep them deciding all the time—where do they look, which clues do they try to solve, how long do they linger over a hastily scribbled note, how do they get new and necessary information?

Puzzles are still the lifeblood of Escape Rooms, even in 2.0. And the puzzles should be integrated with decision points you embed in your narrative. I call those decision points—which are really plot points—the “hooks” on which you hang the story.

As you know from your first screenwriting classes, “action is character.” So non-player characters are an ideal information delivery system. Sometimes I have been able to use them in my Escape Room narratives, but not always.

So, what then? The characters who are not there physically but are inherent to the story (the hidden villain, the missing people you are trying to find, the characters that have inhabited the space in the past, etc.) can be a great tool as well.

Using reveals of their backstories and building empathy with them through those details creates emotionally laden decision points for the players.

As I have learned over the past few years while shopping a paranormal thriller, even some industry professionals have a hard time conceptualizing the differences between a thriller and a horror film.

When it comes to Escape Rooms, the prevalent tropes of horror—blood-splatter, spray-can cobwebs, and severed limbs—are done to death. In many cases, the Escape Room is nothing more than a low-budget haunted house with some generic puzzles added in.

That’s not what I’m talking about here. In a contained thriller 2.0 Room, psychological tension is primary. Sure, there can be an element of physical danger (although the players know they can’t be hurt) and the judicious use of jump scares is encouraged and appreciated.

But keep in mind the good old days of horror (Haunting of Hill House and Hell House come to mind)—it’s what you DON’T see that has the most effect.

Sound and Atmosphere are the key components in support of your story. Let the real monster be the threat of failure. Of that clock running out.

Be sure to think outside the box when it comes to location. Unique geographical and historical context can help. I wrote a narrative for an Escape Room that took place on the Carolina coast during the blackouts of World War II when U-boats were sinking hundreds of ships and the citizens were so scared of providing a target that they wouldn’t turn on a living room light or their headlights when they drove.

Who could they trust? What was that light streaking across the window? Add thrilling music, a couple of harried phone calls reminding them of the stakes, and a villain with some complexity and a thriller will get the heart racing way more than tired horror shtick.

Subverting the Genre/ Flipping the Bones: Adding  Surprise and Shock

There are ample opportunities to take what you’ve learned writing thrillers and apply it to the Escape Room experience.

You can use red herrings. But I believe in using them sparingly, just as you would in a screenplay. The clock is ticking and false leads breed animosity. Remember—with Escape Rooms it’s all about the social media reviews. And a pissed off, embarrassed player will hit the “one-star” rating every time.

The best approach to creating the unexpected for the players is to create decision points for them that they were not anticipating in an Escape Room. Set up a situation where one of the players has to make some kind of sacrifice to help the team. Give the players reasons why they want to help the antagonist.

Help the antagonist? Why would anyone do that? If you make them human—give them a backstory where their need for revenge is understandable or even sympathetic—then it happens. Play against the stereotypes. FLIP THE BONES.

In one of my Escape Room narratives, the antagonist’s reasons for and perhaps right to revenge were so strong that we were able to create multiple endings from which the players could choose.

Although the first choice is overwhelmingly chosen, players have helped the villain—and not just to deviate from the norm. During “frothing” they express how much they empathize with him.

When making decisions about Flipping the Bones, keep asking yourself if you are building or betraying trust. Any decision you make, if it serves the game, builds trust.

Remember “Chekhov’s gun.” If you introduce an item or an idea in a prevalent way in the “first act” be sure to use it in the “third act” (and by all means, use the three-act structure. It works). The players may not realize consciously that you are paying IOUs, but they will know on some level that they were treated fairly.

Think about films like Saw. You either escape or you die. Any contained thriller has a similar consequence for the heroes. Defuse the bomb, or tens of thousands die.

For the die-hard (pun intended) Escape Room player, not beating the clock—not solving the game—is a fate akin to death.

Continually raising the stakes with bigger twists and turns, tightly aligning the story with the increasing difficulty of the puzzles—which will always be the case when working with a good designer. This will keep the tension high and make the game clock look five times bigger and brighter red in the players’ field of vision.

If you’ve found ways to physically or emotionally isolate one or more players from their group (another trope of contained thrillers), make the opportunities to reunite them or to save one of them as tantalizing as you can by making the story matter in the ways that I’ve discussed. Play on the dilemma of helping the group versus saving your own ass.

It’s all part of the “frothing” experience. They’ll thank you for it.

As with any contained thrillers, in the end, it is all about Survival versus Doom.

I am currently working on a novella outline for a Sherlock Holmes pastiche with a Gothic twist. I am applying all of the things I’ve discussed here to get the readers involved in the unfolding of the tale and the uncovering of the clues.

I highly recommend getting into Escape Room narrative writing. Watching the players through the camera feed is akin to watching the audience in a darkened movie theatre jump and shriek and say, “How did I not SEE that [clue, reveal] coming!?”

And, I guarantee you, it’s a hundred times more thrilling.