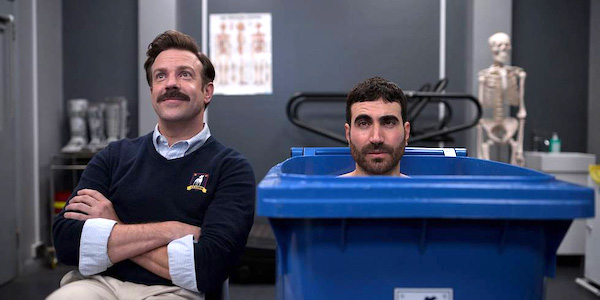 Ted Lasso (Jason Sudeikis) began his professional life as an NBC commentator for the British Premier League to introduce the sport to American audiences. Seven years later, Ted Lasso got his own TV show on Apple TV+. Lasso was the brainchild of Jason Sudeikis, Joe Kelly, Brendan Hunt, and Bill Lawrence. Co-creator Bill Lawrence spoke to Creative Screenwriting Magazine about the path to get the show made. Bill is also known for co-creating Scrubs, Cougar Town, and Spin City.

Pitching the show to Apple TV+ was a tall order because the creators had to convince them how different it was from the video promos in order to get it greenlit. “The promos were funny, sketchy, broad, and loud.” Ironically, Lawrence didn’t even believe there was enough material in these sketches to build out into a TV series. But Jason Sudeikis had a vision and wasn’t interested in the other show Lawrence was pitching to him. Eventually, Bill’s resistance subsided and they started working on the TV series.

When they were developing the show Lawrence used Jason Sudeikis as his North Star to contour the feel and tone of Ted Lasso. “Jason could play a comedic, romantic, or dramatic lead,” he said. “Sudeikis still considers himself a writer first, actor second.” In order for the show to work, they needed to expand Lasso’s character and humanize him with a broader emotional base. The team behind the folksy commentator from Witchita, Kansas began their quest to create “a TV movie of their own favorite sports movies.”

The writers on the show spent the first few weeks building the characters and then broke the stories.

Good sports movies are never about the sport. They’re about the struggle.

Ted Lasso went to coach AFC Richmond without a clue about football. It was hard work fleshing out Ted’s character to add more layers to him. “In order to do this, we discussed the ideal version of an American in Britain beyond a fish out of water story. The current view of us is ‘bombastic, ignorant, and arrogant.”

Lawrence and co. settled on their preferred version of an American abroad – ignorant and curious. “Lasso may come across as being a step behind, but when he catches on he gets underestimated and surprises you.”

Bill Lawrence defined Ted Lasso as “dumb like a fox because he is simple to some, but he’s a lot more emotionally intelligent than you think. We added pathos to his life.” After the first season revealed Lasso was in the middle of a struggling marriage, the creators knew they had a well-rounded character.

There is considerable innate wisdom in Lasso’s unconventional coaching style. Jason Sudeikis, Joe Kelly, Brendan Hunt, and Bill Lawrence explored their love of mentors, coaches, and teachers – especially the ones that “don’t make you do the obvious thing, but instead show you there are different paths.”

Coach Lasso was subtly influenced by global events at the time. “Everyone was so cynical and tearing each other down,” proclaimed Lawrence. While developing Ted’s character, it would have been convenient to either build him as a clownish buffoon who didn’t realize people were making fun of him, or to have him retaliate. Instead, they opted to craft a character who was “a true optimist and a true gentleman.” Such facades quickly crumble and characters eventually reveal their true selves. This didn’t happen in Lasso’s case because his positivity is his essence. “When you realize Lasso is truly sincere, it forces you to look at the person you’ve become.”

Ted’s antics on and off the field bounce between silly and serious. He not only affects the other characters in the show, but he also affects the audience with his view on life.

Lasso’s character is a contradictory blend of wholesome Wichita goodness and a bonafide philosopher. The character is a conglomeration of coaches that Jason Sudeikis grew up with. Lasso’s folksiness and love of proverbs and platitudes were not initially intended as an endearing asset. They were part of who he was.

The unique aspect of Lasso is that he’s deeply in touch with his emotions and openness to external ideas. He processes the world in an atypical way by offering hope and optimism and always seeing the good in people. He operates on the belief that good always wins out. “Ted is not a knight in shining armor. He shows his players different paths they may choose to take.”

Be curious not judgmental

Ted Lasso is a compelling, multi-layered character who both drives the show but also impacts the characters around him. “Ted is a catalyst for the other characters to look at themselves and he’s on a journey himself.” Ted’s journey is also the slowest.

The success of any comedy lies in its ability to keep its characters grounded in emotional reality. “Sports movies have their tropes you have to follow – the locker room pep talks and the villainous boss (Rebecca) who is trying to destroy the team for revenge.” These tropes exist for a reason and must be included to satisfy audience expectations. However, in streaming TV shows, “You can expand these tropes to show how the team’s owner got to where she was emotionally. She uncomfortably lets Ted inside her world as she confesses why she’s in such a dark place and why she’s damaged.” Streamers enable writers to explore these uncomfortable character moments in a deeper way. For instance, it enables a diva to transform into a more sympathetic character. “It allows the audience to understand them on a different level.”

The female leads Keely Jones (Juno Temple) and Rebecca Welton (Hannah Waddingham) are integral to the strength of the show.

They could have been ciphers to service the male characters. They are female leads in their own right. “Putting these two women together to discuss their insecurities and how they got to where they were, allowed the show to transgress a male, sporting, niche audience.”

The traditional path of the sports movie suggests that the underdogs pool their strength and win the championship.

This is demonstrated when AFC Richmond under Ted Lasso’s tutelage didn’t win at the end of the first season. This was entirely Sudeikis’ idea to reinforce Lasso’s philosophy on life. “Winning and losing isn’t as important as taking care of the team.” Success wasn’t so much about winning the championship as it was about the team making good choices and forging a new path.

Jason Sudeikis conceptualized the TV show as an ensemble piece. “Every character’s journey was as important as Ted’s.” That is why the series opens on Rebecca’s face and not Ted’s. Each character has a unique voice so it was imperative for each actor to take ownership of their characters rather than slavishly follow the showrunner’s vision. This was a case of having too many chefs in the kitchen actually working.

It has been argued that comedy and drama are flipsides of the same coin. “Laughter and sadness are true and real. We share the highs and lows and laugh at the folly of sadness in the absence of anything else.” Sadness makes us vulnerable and brings us closer together.