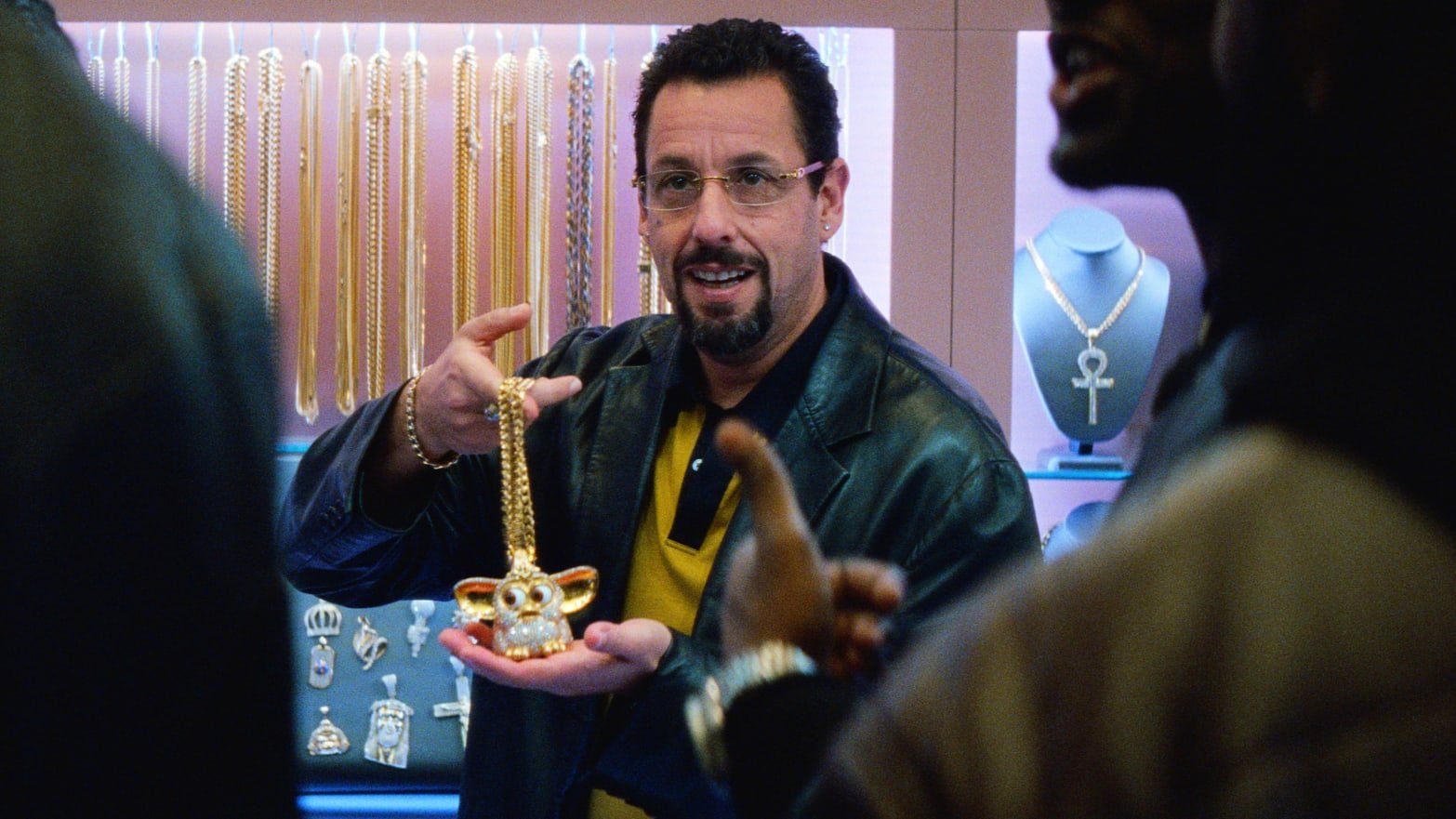 “Uncut Gems” Makes for a Tense and Tumultuous Character Study

There are many outstanding qualities to the new film Uncut Gems. It’s a vivid character study that stars Adam Sandler in his best screen performance to date. The dialogue, written by its directors, Benny Safdie and Josh Safdie, along with Ronald Bronstein, has a blunt and profane New York City honesty to it – the kind of patter rarely heard on the big or small screen these days. The film’s camera work and editing are some of the best of the year, drawing you in with its kinetic energy. The film also pins you to your seat with tension that most thrillers and horror movies would be lucky to claim. It’s a tumultuous filmgoing experience, one that throttles you and utterly wrings you out.

What makes it so tumultuous? For starters, the story’s lead character is living a life of utter chaos. It’s difficult to like someone as irritating, loud, immature, and aggressive as Howard Ratner (Sandler), but he’s our protagonist. He’s also one of the most self-destructive characters at the core of a film in quite some time and it asks a lot of us to invest in his ruinous shenanigans.

You might have to go back to 2008 when Mickey Rourke played Randy “The Ram” Robinson in The Wrestler to find a lead character as demonstrably pathetic. At least Rourke’s pugilist was just trying to pay rent and put food on his table, but Sandler’s Ratner lives a tony life and should have it made. He makes an extraordinarily good living as a New York City jeweler who caters to an elite clientele of upscale Manhattanites and celebrities. Unfortunately, Ratner’s unable to count his blessings so the man desperately chases more and more pleasures. He cheats on his wife, is a gambling addict, and gets off rubbing shoulders with punks and gangsters. Every moment of his life is a frenzied mix of buying, selling, worrying, deceiving, and working overtime to keep from being flattened by a host of enemies.

It’s hard to care about someone who endangers everyone in his orbit too, but that’s what Ratner does. And throughout this R-rated, two-hour and 15-minute film, we must watch Ratner risk his business time and time again, not to mention the lives of his family, his employees, and himself. Ratner makes horrible, disastrous choices at every turn. He’s a first-class schmuck, and that’s being kind.

His main loan shark Arno (Eric Bogosian) who comes-a-calling is a relative, but that doesn’t prevent him from having his goons Phi (Keith Williams Richards) and Nico (Tommy Kominik) rough Ratner up. (The film’s poster highlights his busted, bloodied nose, courtesy of those two thugs.) Equally rough is Ratner’s relationship with his unforgiving, ex-wife Dinah. Played by Idina Menzel (Frozen), she’s a high-strung character unwilling to let anything go. She finds her former husband’s tendency to sleep with his employees especially egregious, and indeed, Ratner is currently mixing business and pleasure with Julia (Julia Fox), a comely sales clerk in his shop.

Ratner runs from one problem to the next like a whirling dervish, running a gamut of emotions along the way, and he foolishly thinks he can clear up all his problems with the sale of a new item he’s just bought. It’s a chunk of rock from Africa, chock full of rainbow-colored opals. He believes in their supposed spiritual powers too and is more than happy to show it off to his untrustworthy colleagues and customers. Particularly smitten is Boston Celtics star Kevin Garnett, playing himself, a potential buyer who believes the stones could be a good luck charm that will help him achieve victory in the NBA finals.

Because he’s such a star f**ker, Ratner allows Garnett to “borrow” the rock for the championship. So Ratner lets his investment walk right out of the store, giving him one more thing to worry about. Of course, the gems help Garnett win, making him all the more hesitant to return it. Even Ratner’s go-between Demany (LaKeith Stanfield) doesn’t do his part to secure his boss’ investment. His underling is too busy hobnobbing with the Celtic’s entourage to do his job. In Ratner’s world, everyone gets caught up in the glitter.

The Safdie brothers skate on thin ice throughout their film, asking us to cheer for such a man-child like Ratner. They ask us to care for a fool who makes one dunderheaded decision after another, but that’s where their genius in casting Sandler comes in. The veteran comic knows just how to make all of his character’s awfulness play as quite funny, and we can’t help but root for him when he’s tickling our funnybone. It’s one of the year’s best performances as Sander makes all of Ratner’s crazy immaturity into something almost lovable. Almost.

Perhaps he’s an uncut gem himself, but as Ratner’s schemes bring more peril, the story changes from an edgy comedy into a terrifying thriller. The last 15 minutes of the film will have you sweating as much as Ratner does while he tries to pull off his biggest bet yet. It’s a harrowing scene, but one that gives the film an unforgettable and just ending.

Uncut Gems is a fascinating character study, one that challenges the resolve of an audience’s empathy. It may confound and even anger some viewers, but the Safdie brothers know what they’re doing. They want their gripping story to put us between a rock and a hard place and make us squirm, just like their protagonist. And like a sure thing, that bet pays off in spades.

Check out the trailer for Uncut Gems below: