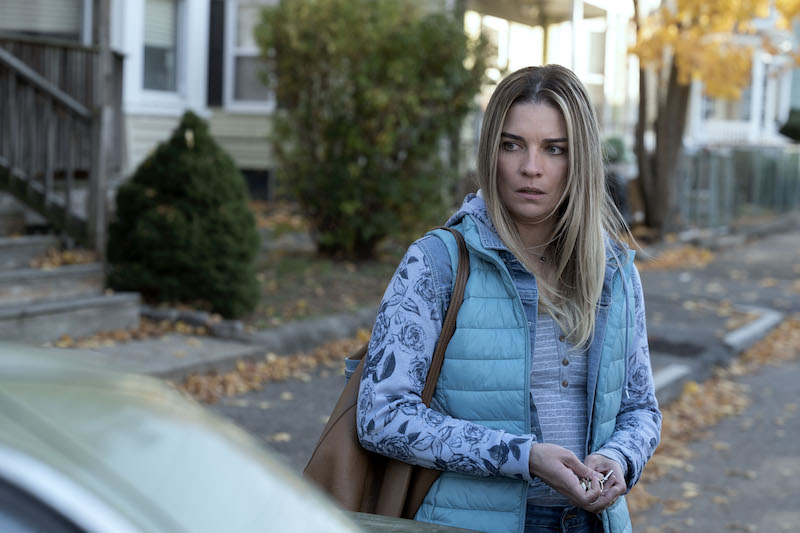 A television show with a title as bold and fearless as Kevin Can F**k Himself can only elicit an equal amount of boldness and fearlessness in its format and writing. Kevin is neither a comedy nor a drama. Is it a tragi-comedy or or a comi-drama? Probably both. We spoke with the show’s creator Valerie Armstrong on meshing a drama and sitcom together dissecting the myths of a sitcom wife.

“I first had the idea for the show in June 2017. I was f***king angry and started questioning things in a way I hadn’t before,” began Armstrong. It all began with a podcast on TV sitcom pilot season. She couldn’t believe that the roles they were offering actresses; archetypes that were barely tolerated in the 60s. “Wife to a funny, tubby, sports-loving guy who does not belong with them.”

Sitcom producers decided they needed really funny faithful sitcom wives to bounce off the even funnier husbands. “The dialogue for the wives were almost entirely ‘Whadda ya mean?’ and ‘Yes, honey’. It was all set up. Nothing about their roles was funny or had any depth.” Valerie Armstrong lamented that talented actresses were actually auditioning for these inane roles. She eventually got fed up, grabbed the sitcom world by the horns and decided roles for sitcom wives were going to change. She invented the role of Allison (Annie Murphy) who charts a course away from her sitcom life to her dream life.

“The first image came to me. Allison walks away from the sitcom living room in the middle of something hilarious her husband Kevin (Eric Peterson) said at her expense.” The audience doesn’t stay with Kevin and his goofy pals. Instead they follow Allison and her feelings into the kitchen. The tone shifts from bright and funny to dark and serious in the blink of an eye as we see the cracks of the facade of the perfect sitcom wife. Allison stares into the camera and blurts out, “I f**king hate my husband.” Then things get real. A little too real. 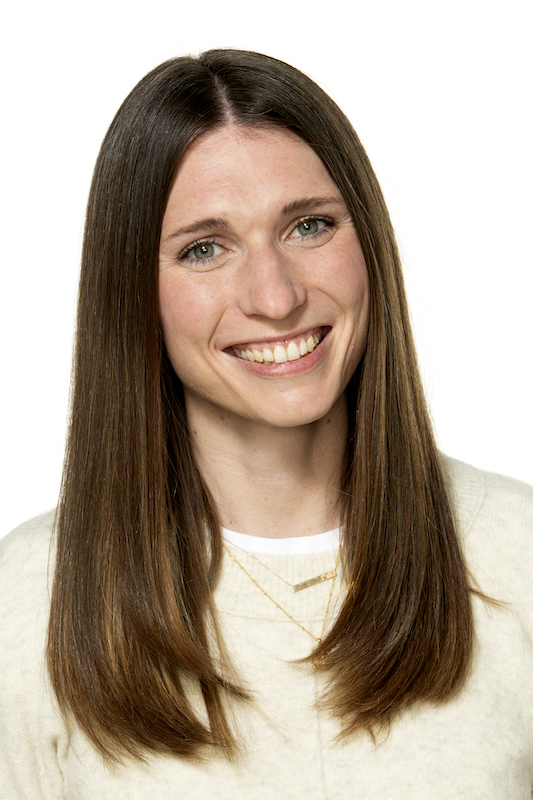 Although some pundits may claim that Kevin is a direct attack on another sitcom, Armstrong claims that nothing could be further from her intention. “We are not poking fun at any show. We are poking fun at these ridiculous husband and wife dynamics that have existed since The Honeymooners – the concept of a husband joking about hitting his wife and everyone laughing about it.” The writer wanted audience to take issue with what we find funny and why we haven’t been questioning it.

Kevin Can F**k Himself didn’t have a traditional birthing to television. The pilot was bought by AMC to develop in a mini-room with Will McCormack (If Anything Happens I Love You) and Rashida Jones (Mixed-ish) for eight episodes. “We spent a summer with Will and Rashida, broke the season and wrote the first three episodes. From there, it went to series.”

The world of the show is actually a bipolar split between Kevin and Allison’s antithetical worldview. We asked Valerie how she built, balanced, and bridged these contradictory worlds that can’t possibly co-exist. “The show could have had so many juxtapositions with regard to format. It could have been Kevin Can Wait meets This Is Us or Family Matters meets The Handmaid’s Tale.” Armstrong used humor to bridge the two warring worlds. “I never wanted the single-camera [Allison’s world] to feel dour. I also never wanted the bright and sunny multi-camera [Kevin’s world] to feel like a slog when it transitioned. By the same taken, we couldn’t simply transition from a funny, hard-and-fast jokey sitcom world into a traditional single-camera comedy without connecting them. “In order to find a balance, we landed on two worlds where people are always talking to people.”

Nobody is constantly cracking jokes in the sitcom world. “People are weird and funny by talking like themselves without having to set up a punchline all the time. So, moving from the multi-camera to the single-camera world wasn’t as much of a divorce as it could have been.” 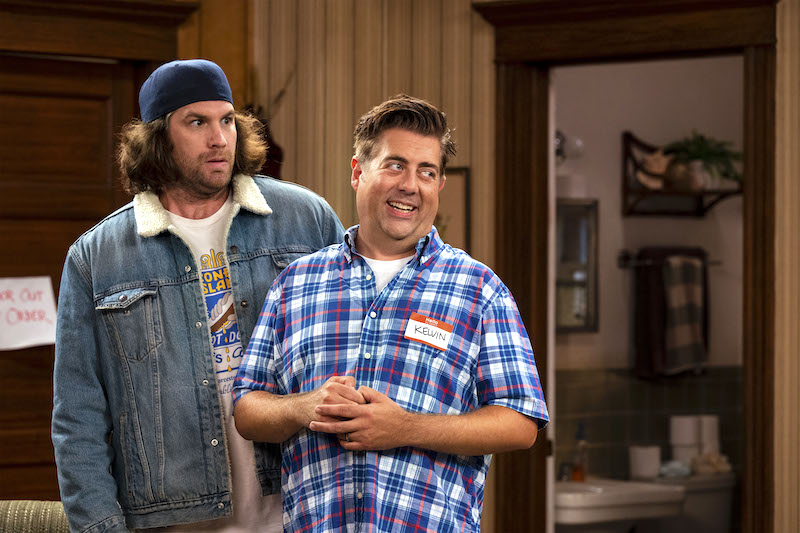 The delicate balancing act of the two worlds could have easily made Kevin fall off the comedic tightrope and jar the audience. “At times, the show is downright mean and uncomfortable.” The writers ensured Allison was a real, fully-realized person in both worlds, following a through line of her search for happiness, to make the jarring effect less disturbing. “So long as everyone knew why Allison was doing things. Even if we didn’t think it was a good idea, we understood why Allison thought it was a good idea.” This bridged the two worlds. “If Allison’s motivations are real, she can do dark things and continue to be funny. She needs to laugh the most during her darkest moments.”

Allison smashes a glass or two during the series, sometimes to the point of bleeding and self-harm. These moments occurred during intense emotional moments which frequently co-incided with her switching between the two worlds. “Allison is really angry, but not in touch with her anger.”

Armstrong considers smashing glass is a metaphor for all the deep feelings many women are forced to hide; things they are ashamed of. “Women are conditioned to appear so perfect that they often feel flawed. Allison lets her rage flip only in the single-camera world. For that first transition, ‘I thought what is something bad that can happen that Allison didn’t mean to happen, but shows how angry she is.’” The simple act of putting a glass on the table and smashing it by mistake is her expression of suppressed anger.

Kevin is an accurate representation of a typical sitcom husband. “He captures that seething, callous, harsh, insensitive, and ridiculous husband.” Despite his character flaws, Kevin isn’t ignorant or unaware of them. This is epitomized in a retort to Allison, “I forgot that mental illness runs in your family.” This was precisely Valerie Armstrong’s point. The line was ostensibly funny, with a dark edge.

The writer didn’t want to create a sitcom that the audience sneered at the whole time. The audience had to laugh. Despite the harsh elements of truth, Valerie liked the absurdity of the situation. “Kevin is the quintessential man child who gets to be a boy until he’s sixty-five. We examine whether Allison has the emotional heft to deal with him.”

Although he understood the show, he didn’t necessarily always appreciate the female anger that Rashida did. This difference encouraged him to delve deeper into the psyches of sitcom wives and husbands. 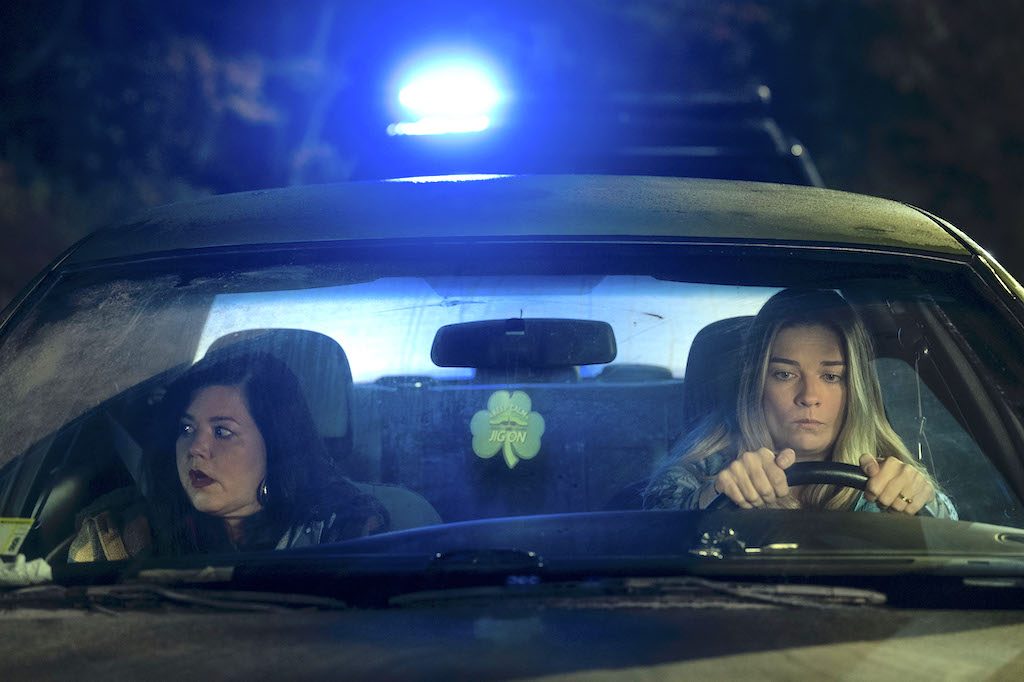 The mini-room was a game of three-dimensional chess, particularly in allocating scenes to the two worlds. “Breaking the show was a bit of a math problem, which I love,” confessed Valerie. Breaking each episode was different. Sometimes, the writers would have a multi-camera idea they would infuse into the single-camera story and vice-versa. “In episode six, we tried French Farce in the multi-camera scenes intersected with the tension of the single-camera world.” The writers focused on Allison’s trajectory to get her from the beginning to the end of the episode. They initially broke the single-camera story and searched for multi-camera ideas to attach to it – as an anti-theme.

Breaking the plot beats of the episode weren’t the biggest considerations for Armstrong. “I’m more focussed on emotions and characters and how they move through the worlds. If you look at the show, the plot lines are actually very small.”

Despite that vastly shifting dramatic sweeps, Kevin Can F**k Himself relies on jokes to tell its story and create tension. Armstrong defines the jokes during the multi-camera sitcom scenes as “classic setup, execute, punchline with physical humor.” The jokes in the single-camera scenes were more naturalistic and reflected natural speech patterns. Consider the difference in jokes between Friends and The Office. “Friends has a laugh track and The Office didn’t.”

Many of the single-camera jokes came from Allison and Patty’s (Mary Hollis Inboden) characters and the way they would say something. Aside from their voices, Valerie also turned the Worcester, Massachusetts to contribute jokes. Allison and Patty also added physical comedy to these scenes.

Not all jokes made it to the page. Some remained which maybe shouldn’t have. “Upon reflection, some of the jokes were too mean. They were changing who the sitcom husband was to somebody who deserved to die.”

Valerie Armstrong makes no apology for providing a vehicle for her to channel the rage of sitcom wives. She also steers clear of terms like “feminist” and “misandristic.” “This is not a man-hating show,” she asserted. “Kevin is a certain type of man and you are allowed to criticize certain behaviors without taking issue with the entire gender.” Her aim is to compel men who display these behaviors to change their ways.

Kevin can F**k Himself is indeed a non-binary, non-genre conforming television show with Valerie Armstrong’s sensibilities stamped all over it. That said, she is a great believer of the collaborative spirit of the TV writers’ room. The final show was “ours” not “mine.”