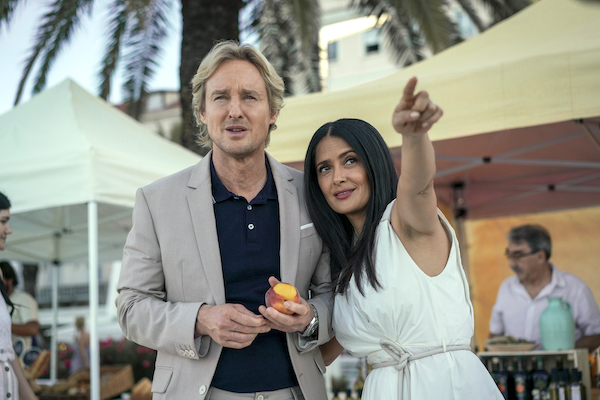 Mike Cahill credits his early fascination with filmmaking to the Fisher-Price Pixelvision, better known as the PXL-2000, a black-and-white toy camcorder from the late 1980s. “It was my favorite toy of all time. No one was teaching me about movies or film, or how the medium worked, but I was discovering you hold down the button, it records, and when you let go, it stops recording. There’s a natural edit to the way it works.”

Describing this early experience as “exhilarating,” Cahill said that even though he took many different paths in his life, he always returned to filmmaking. Clearly, the passion has paid off.

Cahill is best known for his work as a writer/director on the documentary Boxers and Ballerinas, and films like Another Earth, I Origins, and now, Bliss. His latest feature stars Owen Wilson and Salma Hayek, a love story about a recently divorced man who is convinced by a street woman that the world is a computer simulation.

Watching the trailer for Bliss, it’s clear the writer/director is obsessed with the outer possibilities of filmmaking. “I love the medium of film. I love what’s possible. It’s cliché to say, but it’s a visual language and it has syntax and grammar. It is capable of speaking in ways that words are deficient.”

Cahill began his film work as an editor in 2003. “It’s a medium that allows different ways of expressing certain unique things about being a human.”

At the time, Cahill had landed his first job out of a college working for National Geographic. “It was so exciting,” he said. “I got this position filming sharks all around the world. One adventure led to another and a friend of mine showed me a photograph of these boxers in Havana.”

The friend encouraged Cahill to go film the boxers and see if a story rose to the surface. While there, he went to the ballet and started thinking about movement in general, which led to this first documentary. “I thought about capturing the movement of these powerful, physical athletes and artists.”

For a decade or so, Cahill worked within the parameters of documentaries, particularly for National Geographic. “I was learning how the tools work. It was important to me to know how to shoot, how to edit, how to put a scene together.”

Logistics aside, the creative always had an urge to tell fiction stories. “I liked the idea of creating realities.” This led to Another Earth.

In Another Earth, Brit Marling (The OA) stars as Rhoda Williams, an ambitious young student, living in a world where “another earth” is discovered in the solar system. Like much of Cahill’s other work, there are always two stories happening at once.

On one hand, Another Earth is a story of self-forgiveness. On the other hand, there’s a science fiction element. “I knew I could do the visual effects. It’s so practical, but I knew I could put another earth up in the sky and motion track it in the shot, and make it look somewhat believable.”

To practice this effect, he made short clips of himself walking outside and looking up to the sky, then he added the computer-generated second earth and worked on tracking it with the shot. “I spent time looking at the iconography of that image. For me, it held this sense of wonder. What would it be like to meet yourself?” he asked the reflective Earth.

Cahill co-wrote the script with actress Brit Marling. “We managed to make it with very little means. The human spirit offers up a great deal of spectacle. Spectacle is just the thing that makes you gasp. Sometimes that’s visual effects, but sometimes it’s an emotional spectacle.”

“I felt like we could do something with little means that still had spectacle of the human spirit.” In addition to these high-concept ideas, Cahill is also drawn to stories about second chances.

“Another Earth, I Origins, and Bliss… In some ways, the themes that keep occurring are ideas of second chances, redemption, forgiveness, love, different types of love and the intersection between science and spirituality.”

The creative said he feels like most people consider science and spirituality to be two vastly different topics, but in reality, “there’s an overlap.” Essentially, they both question meaning and purpose for mankind.

“How do they compute?” he said about the ancient stories of civilization. “When you think about Bliss, [the story] uses simulation theory, but simulation theory is a way for the secular mind to talk about the created world, and the implications of it.”

“You can safely wade into that territory and just say I’m going to create a world. What are the attributes, why are the attributes, and particularly, why is there suffering? It’s a theological issue, but it’s also a ramification of simulation theory.”

In order to connect the big ideas with the science fiction element, Cahill said, “There are multiple threads happening at once.” Research-wise, he’s constantly reading about big, complex ideas, but the movie only begins when an emotional element moves him.

“When I recognize something that I find very moving and I want to capture it, bottle that emotional thing up, and make a work that can carry that thing forward. For Bliss, the thing I wanted to do was tell a story about the fragility of the human mind. I wanted to treat it with empathy.”

Since everyone sees the world vastly differently than most everyone else — be it political, scientific, mental health, drug abuse —there’s a connection to real life and the film. “The way [people] see the world, is infused with their inner emotional landscape.”

Thinking about this division led to the film. The manifestation came in the form of Greg Wittle’s (Owen Wilson) daughter Emily (Nesta Cooper), and her constant attempts to connect with her father. The problem, of course, is that Greg sees two very different realities, and unfortunately, his daughter is in a reality where Greg is homeless and someone (Salma Hayek as Isabel Clemens) is constantly telling him his daughter, and that other reality, are not actually real.

“Despite the hardship, that love and persistence can make a difference. That felt emotionally powerful to me. The way to do that was to use science fiction and create literal different worlds with simulation theory.”

Despite the vastness of the two worlds, the core of the story is still a love story. “That love story between Greg and Isabel is what happens when two people see the same world together. That’s what love feels like. Everything else disappears.”

With all this in mind, Cahill’s process is relatively simple. “One thing that I do is, I think about our world and I change one element. A duplicate earth (Another Earth). Reincarnation is proven through the connection of the eyes (I Origins). We’re living inside a simulation (Bliss). I change one element of relatable reality and that one change is a change that evokes some sort of wonder.”

“It’s just enough to intrigue,” he added. “And, if that change were to occur, how would that change highlight some aspect of our human condition. Who needs that change the most? Whose story would best be served by that intriguing idea?”

As for the overall process, Cahill describes a journey in which a film crew is chasing an exotic bird. “The whole process evolves, from writing to directing to editing. It’s a little esoteric, but it’s like there’s a forest and somewhere over there, there’s a very rare beautiful bird… and that bird represents some aspect of our human emotion — something I find profound.”

Cahill then said you assemble your team, head into the forest and try to catch the bird. “It’s hard to catch it. You don’t know if you’re going to catch it. You might not catch it. But you get a group (crew) that’s really great, describe what it looks like (the idea), then use your map (script) to try and get there, but there are twists, turns, and revelations along the way.”

Using this map, the writer/director said he still leaves room for the story to grow, as the story is actually “a living thing.” He said, “I like to leave room for us to change things through rehearsal, shooting, and then in the edit, the edit only works if you catch the bird. If you don’t catch the bird, the movie fails.”

For Bliss, Cahill originally wasn’t sure if his crew caught the bird. Early in the editing process, it just didn’t feel to him like it was there. However, while in quarantine, he was able to take two months off from the project.

When he returned to work, he saw the bird. “In my humble estimation, at least the bird we were chasing, we caught. It’s a living process. That’s what makes filmmaking so thrilling. You’re trying to capture something that perhaps has never been captured before.”