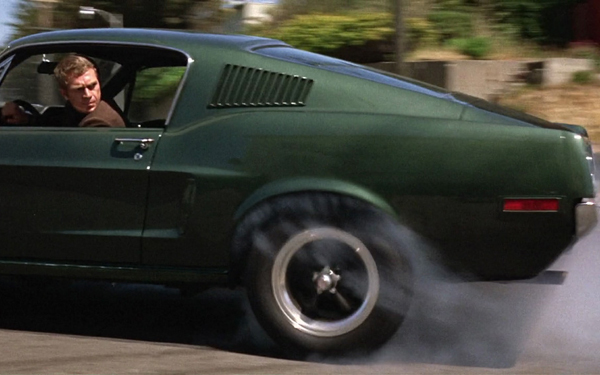 We Need to (Not) Talk

A funny thing happened when I decided to revisit the car chase from Bullitt. I found myself on edge in a way I could not quite define. I seemed to be experiencing more of a sense of tension and worry than I normally do in an action scene. Then, about three minutes into the ten-minute sequence, I realized why I felt so uneasy: nobody was saying anything. There were no quips, no outbursts, no fearful statements about what bad thing might happen next. Just the grim faces of the bad guys and their pursuer, the sound of the revving engines and the screeching tires. There isn’t even a musical score!

The Chase Scene from Bullitt, Part I and Part II

I urge you to view the scene (Links: Part I and Part II). Stay with it. Take in the entire sequence. Don’t watch it for a couple of minutes and think, “okay, I get it, there’s no dialogue, now can I go watch a cat playing the piano?” The longer you watch the chase, the more you can feel the power that lack of dialogue carries in a scene. It is very much punctuated in a chase sequence, but the lesson applies to a writer’s decision to include—or not include—dialogue in any moment of any scene, from an epic battle to an intimate moment at a kitchen table.

There is so much conflicting conventional wisdom about what quantities of white space should be on our pages that we writers are starting to feel like we’re always doing something wrong. The bottom line is that film is a visual medium, and we need to tell our story in pictures as often as we can. But movies haven’t been silent since almost a hundred years ago (The Artist notwithstanding), and no script reader wants to wade through three-dozen chunks of stage direction before a dialogue scene lets us know where we are in the story. (As a story analyst, I can attest to that being true!) Audience members, too, are well accustomed to letting what people say orient them to where they are in the story.

So, where to lose the dialogue? And, if it does get cut, how can we not overstuff the screenplay with massive blocks of clunky description?

Like everything in any creative endeavor (and in life itself, let’s face it), balance is the key, and finding that balance is something the writer must work toward on a case-by-case basis, depending upon the tone and thematic or story content being conveyed by the script.

That said, here are a few things to keep in mind:

Getting back to Bullitt: when we watch a scene that ends up going on for a long time without dialogue, it demonstrates that we actually become more involved in any given screen moment when it goes quiet, because we are expecting to hear words that end up not being there. We have lost the comfortable rudder of a line or a speech to keep us on our expected course. Immediately, our radar is heightened. If nobody is talking, what is going to happen? The answer is, anything can happen! Because we live in a world of dialogue, its absence automatically adds power. Go into your screenplay and examine how manly times you can make use of this technique.

Get in the habit of examining every scene, and I mean every scene for extraneous dialogue.

Some of the more common unnecessary lines concern reactions, especially to something terrible. A character watches a loved one getting physically hurt, for example. What does a “nooooooo!” or an “Oh my God” add to this moment that terrified, anguished silence cannot?

How many times do your characters enter a room and offer a greeting to the other person in the scene? Unless the greeting is coming at the end of a .45, why are we wasting time with someone coming into a room? Film is also an editor’s medium, and channeling your inner Avid can be a boon to keeping your screenplay moving along at a good clip. Just get the character in the room and start the scene. Opening and closing the door? Saying hello? Someone in the audience could have crossed over into naptime in the extra twenty seconds it takes to open and close a door!

With drama, play the scene in your head. Think of the actors and what they can convey about feelings and emotions with a gesture or a glance. Does your character have to say, “I know what you mean?” if they can simply place an understanding hand atop the hand of their scene partner? Let’s say your bad guy is scoping out a crowded city street for the right guy to rob. He sees a fellow whipping out a wad of bills to pay a street vendor. Does your bad guy need to say “There he is, boys, there’s the guy with the money that we need to rob?” (That was a rhetorical question, by the way.) It’s remarkable how, of all things, the old art form of radio still makes its way into many screenplays. “What are you doing with that gun?” was a line that was necessary when there was no picture to go along with the pulling of a gun. Now, we can see that gun and are very clear on what the bad guy is doing with it. Cut lines that tell us what we are already seeing.

Comedy is a genre wherein a dialogue-driven story gets a little more leeway, simply because a well-crafted joke is always going to be funny to read and hear. But the same rules apply. Get us there quickly, and work within the visual storytelling medium to convey the laugh as much as you can—and make it in context. There are few things as uninspiring as a feature-length screenplay that amounts to nothing more than a strung-together collection of skits. While there is more room to give dialogue free rein in movies, the author’s real responsibility is to make sure there is still a strong narrative behind the funny.

Dialogue-driven comedy: Seth Rogan as Cal and Paul Rudd as David in The 40 Year-Old Virgin

Comedy or drama, it takes some time to become adept at knowing exactly when a line of dialogue is not needed. As a general rule, if it is conveying a feeling that we already get from what we have just witnessed in the scene, lose it.

Which leaves us with stage direction, and how to keep that at a minimum at the same time as needing to use more of it to replace the dialogue. It’s actually easier than you think, and it involves the exact same approach to taking out the extraneous talking. In fact, in most cases, you will find that cutting dialogue may require no additional stage direction at all. It will simply streamline the interactions between the characters. If, however, to use one of the examples above, you are replacing an anguished cry of “nooooo” with a silent, anguished reaction, how many words does that take? You decide, but I suspect it won’t be more than a few. When new descriptions are needed to guide the action, simply get to the emotion you hoped to convey with the dialogue, and drop it in. Usually, a good, effective cutting of dialogue does not mean it needs to be replaced with three paragraphs of pantomime. It is simply, again, removing spoken words that overstate what is already stated visually. And if it is already stated visually, it should already be there in your script anyway, right?

Well, those are the “Bullitt points.”

Sorry, I guess I need to work on knowing when to cut the extraneous stuff.