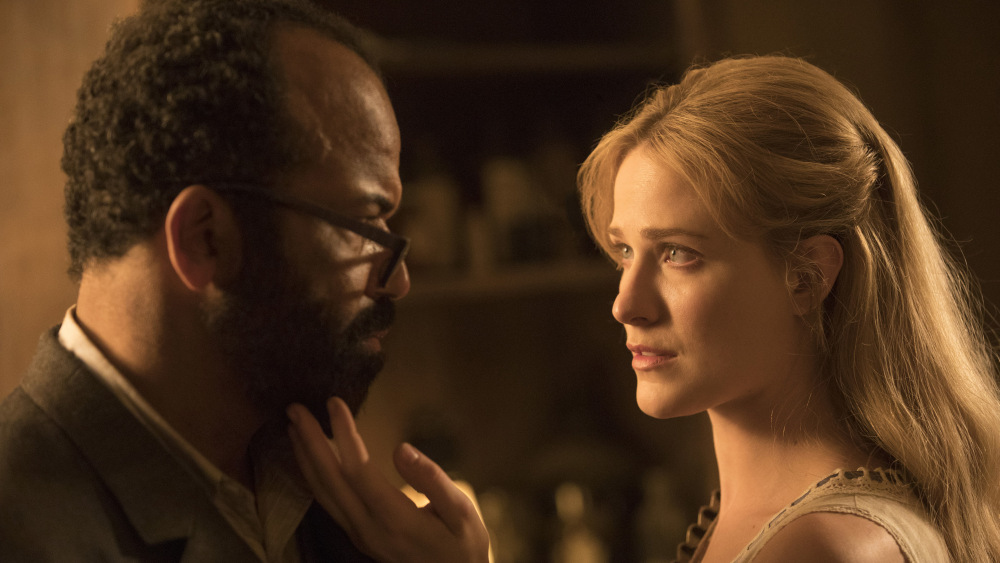 The “Westworld” Season Finale Opens the Door to a New World

HBO’s “Westworld” series ended its second season June 24th with an enormous opportunity to chart completely new territory, as well as course-correct some of the problems that plagued this year’s 10 episodes. There is no question that the show remains one of TV’s boldest and smartest offerings, but its multiple timelines and fragmented narratives have led to enormous audience confusion and frustration. That may be the biggest reason the show has shed so many viewers. The backlash in social media has been fierce and chronic too. Thankfully, the riveting season finale went a long way to put all of the show’s chaos into order. The season ender also opened the door to a whole new world for the third year.

The main theme that the show focused on in season two was that of immortality. Can a robot live forever? Can a human being live forever too if their consciousness could somehow be contained in an indestructible robot? In the theme park that was Westworld, the artificially intelligent ‘hosts’ as they were called, were built to last. Time and time again, these hard-wired creatures survived all kinds of punishment. Guests playing an expensive game of “Cowboys and Indians” could shoot them, stab them, burn them, and no matter what, the hosts would come back for more. A little repair work in the underground lab and they were as good as new. For the hosts, death was merely part of their recyclable narrative. They lived to fight another day. Continually.

But what of the humans? Could human beings somehow live just as long if they could merge with the advanced A.I. technology? The second season revealed that the search for this answer was ultimately why the park existed. It wasn’t just an expensive Disney World with the Audio-Animatronics coming to spectacular life, it was a testing ground for the melding of man and machine. Could the two be combined and render that elusive immortality for humans whose bodies had aged, withered and betrayed them? That’s the only thing the Delos Company corporate overlords cared about. They wanted to beat death and God.

On the other side of the equation, there was Dr. Robert Ford (Anthony Hopkins), another park bigwig with a God complex. He not only was the Westworld theme park’s founder but their top inventor as well. While he was helping Delos with their human immortality schemes, he was also working on A.I. immortality as well. That’s why in the first season finale, he programmed his host creations to turn on their human guests. The mortals were mowed down by A.I. gunfire upon Ford’s instruction. He sided with the A.I.’s as the true inheritors of the earth, evolving from sophisticated machine into virtual humans with their own feelings and thoughts. Why merge machines with mortal consciousness, when the hosts were developing all their own?

Thus, Ford earmarked his favorite A.I. ingenue Dolores (Evan Rachel Wood) to spearhead the revolt against the humans. He even programmed her to shoot him dead as well. The octogenarian knew that he wasn’t long for the world anyway and that he’d already found the way to ensure his human consciousness lived on. Ford enabled Dolores to be so advanced that he wanted her to step out of Westworld and into the real world. There, she could start the A.I. revolution. And Ford was clever enough to have her escape planned by hiding in a robot designed to look like the A.I.’s chief human rival – Charlotte (Tessa Thompson), the smug Delos wonk placed in charge of shutting down the revolt inside the park.

The trope of man versus machine has been fueling science fiction since the invention of the cotton gin. Over the decades, Hollywood has had a field day with the theme, rather notably in 1973 with the original Michael Crichton movie of the same name where robot Yul Brynner stalked park guest Richard Benjamin. Make machines too intelligent and soon they will take over the world and annihilate mankind, that was the message in movie after movie, show after show. Now, over 40 years past that Crichton classic, it seems to be coming less fictional with each passing year. After all, computers are omnipotent and how many millions of jobs have been taken over by machines?

Perhaps because such sci-fi tropes are nothing new, the “Westworld” series tried harder to add more to the mix, even including those multiple head-scratching timelines. But series creators and showrunner Lisa Joy and Jonathan Nolan knew that theirs could no longer compel if it was merely an easy “Us versus Them” story like in films like “The Terminator” or “I, Robot.” Even their interest in the battle between the park’s S.W.A.T. forces against the marauding hosts ran out of steam just a few episodes in this year. And what would be the point of either side winning? Would the show just return to things being honky-dory back in a cleaned-up park? No, this show is miles beyond something so boring and shortsighted.

That’s why Joy and Nolan set up the second season to focus on just how this season would set up the third. And A.I. Bernard (Jeffrey Wright) was the perfect vehicle to bridge it. In the first season, the park scientist didn’t even realize he was one of those advanced robots already created with human consciousness inside. And in the second season, he seemed torn between the world of hosts and humans, suggesting that he was perhaps going to be the peacemaker between the two sides. Instead, he ended up being Ford’s brilliant idea of a Trojan Horse.

Bernard’s memory loss and confusion over events was a ruse to throw off the human forces trying to regain control of the park. As programmed by Ford, revealed in the last few episodes of the second season, Bernard’s fragmented memories that were playing as three different separate timelines were buttressed up against each other to throw off the human police as well as the viewers at home. We were all played. Bernard was many moves ahead of us in Ford’s three-dimensional chess game. That’s why he killed off Dolores to appear on the side of the humans, as well as implanted her consciousness into the Charlotte A.I. Ford was pulling his strings, and everyone else’s.

Especially cunning was the amount of show time focusing on Delos CEO William (Jimmi Simpson) interviewing his predecessor James Delos (Peter Mullan). At the end of season one, Simpson was revealed to be playing the younger version of the intrepid perma-guest “The Man in Black” (Ed Harris). Thus, these interviews shown in the second season were clearly taking place decades in the past. William spearheaded the idea to mix man into machine, yet it took decades to perfect as the final interview showed Harris still giving James the “Turing Test.” That test, as you’ll recall, was developed by Alan Turing in the 1950’s to test a machine’s ability to exhibit intelligent behavior equivalent to, or indistinguishable from, that of a human. While the James robot kept failing it, the Bernard robot was able to pass as a human, known only to Ford.

Now, Bernard was on the inside, set up to help Ford’s master plan while Delos corp. still diddled on the James robot. Back in the present, Bernard made Dolores shoot Charlotte dead before killing her and then placing her consciousness in the Charlotte robot. Dolores, inside Charlotte, ventures out of the park and to the mainland and Ford’s plot is in full bloom. Now, it’s literally and figuratively a whole new world for the A.I.’s and the show. The perimeters of the park are gone, and we will now see how Dolores acts amongst the regular population.

The show now begs some of the same questions that Alex Garland posed at the end of his sci-fi classic from 2014 “Ex Machina.”

At the end of his man vs. machine fiction, Eva the A.I. trumped her two would-be male suitor/captors and left them both for dead on the island while she ventured back to the United States. That film left its climax open-ended, but “Westworld” will likely give us definitive answers. Will Dolores come to view regular folks more sympathetically than the rich ones who used and abused her kind in the park? Will she see that the fight for justice and equality is a human struggle too? And what of the humans successfully transplanted into robots? After all, it sure looked like the old “Man in Black” is actually a robot as evidenced by that post-credit sequence.

Other questions remain too. Where do Maeve (Thandi Newton) and other returning characters, both robot and human alike, fit into this new equation? Are there other artificial worlds to be discovered? How much technology is running the futuristic world? And what will Bernard, now on the outside, make of it all as well? Will his own burgeoning consciousness drive him to try to stop Dolores, independent of Ford’s instructions? Such answers to these exciting queries remain to be seen.

The best part of all this is the, ahem, host of new narrative possibilities. “Westworld” will no longer be confined to a finite park. Instead, the real world is the new playground, and it’s one that will likely be a whole lot scarier and complex than anything seen in the amusement park. It should all make for a heady new season, and hopefully one, a little easier to keep straight in our minds.

Catch the trailer for Westworld HERE.