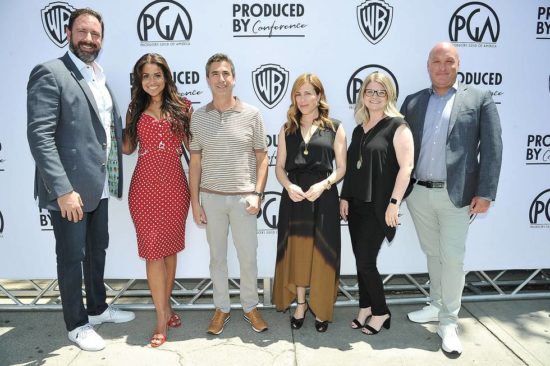 What Are TV Buyers Looking For?

What Elements Are Essential To Make A TV Show Attractive To Buyers?

Moderator, Tracey Edmonds (Edmonds Entertainment) asked what are the most important elements required to have attached to a TV show in order to sell it. “From a non-scripted perspective at NBC, we’re looking for really strong formats. You don’t necessarily need talent attached although it can be helpful. We’re looking for ideas that are fresh, innovative, and have a specific hook that reaches a broad audience from eight to eighty-five years old,” said Groom.

NBC Alternative Programming thrives on shows that the whole family can watch together.

Michael Thorn works in drama, comedy, and animation at FOX Studios. “We are a voice-driven business. We bet on voices whether they are up and coming writers or experienced show creators.” FOX invests in both original material or existing IP. Thorn hears pitches from studio partners to individuals. “Fresh voices can come from the most unlikely places.”

Showtime is looking for shows “that are audacious and bold in their ideas and in their storytelling,” declared Amy Israel. “We get writers to come in with something they’re obsessed with and passionate about. Something they can’t shake and let go. They are usually the stories we usually gravitate towards. It is so much about the idea, the quality of the writing, a singular voice and vision. Look at the shows that have stood the test of time. They all have innovative storytelling. Look at shows like Billions, The Affair and Homeland.”

Israel continued her admiration for daring show creators. By the time a season ends, it seems the second season can take any direction. “Everything is left on the floor. How can they possibly have a season 2?”

Although additional elements such as finance, distribution, and above the line talent can be useful to get a show made, they are not essential. Jenny Groom is more interested in “a specific idea with a unique twist that separates it from similar shows.” Specificity and uniqueness raise the chances of a show being bought. She cited an example in The Voice. It was developed internally at NBC because they were looking for a new way into singing contest TV shows. The “spinning chair” was the way in.

Amy Israel recalled that two years ago, Showtime didn’t commission any shows without cast attachments. Things are evolving because TV has become so good and cinematic so talent is flocking to Showtime looking for shows to attach themselves to.

“A TV series requires an incredible vision to make. It requires a character journey you can believe in and care deeply about,” added Peter Micelli, former Head of the Packaging Department of CAA. “There are a million elements of why a show works or doesn’t work. Narcos almost fell apart seventeen times. You also need to create a team that executives can trust.”

Packaging is also a balancing act of navigating both through the sheer volume of quality material and timing. “How do we roll material out so network executives have to deal with?” said Micelli.

“Something that makes them so nervous that if they don’t pay attention someone’s going to gobble it up and they miss the opportunity.” He also advises writers and TV show creators to look for under-serviced parts of the business. “The package doesn’t always win the day. Create opportunities that begin with you, not with material that’s pre-existing.”

Nick Pepper begged to differ. “Packaging is incredibly important when you build your show. It’s part of the genealogy of a TV series because the elements help realize your vision.”

There is also peril in developing a TV series for too many buyers because their requirements are so different. “We look to sell a property to two or three people.”

Peter Micelli talked of various round table meetings with talent representatives at FOX clamoring to sign their talent to a project. “The project was so mediocre that it didn’t matter. However, we can strategically package talent that complements and enhances the writers’ vision.”

Organic packaging is different than simply chasing a sale. At the end of the day, everybody wants to create a hit TV show.

Far too many screenwriters have great ideas but lack the access to move them forward. “Look for filters of quality,” advised Peter Micelli. “Attach yourself to people of value that can open up doors for you and make your time efficient.” Writers should consider how they’re generating ideas, what important stories they want to tell the world, and how the stories want to be told – features, TV, documentaries. It’s all about developing relationships with people who have previously done similar work successfully.

The importance of building your social and professional network cannot be underestimated. “Extend yourself to those situations that make you uncomfortable. Be efficient and strategic with your meetings. Always be a student of the business.”

A key aspect of producing successful TV shows is to explore issues of the day. “Showtime has always been at the forefront of responding to the world around us. We want shows that are in the zeitgeist, in the ether, that challenge our audiences and make them uncomfortable.. but at the same time. we’re trying to entertain them,” said Israel.

It really is a matter of exploring our world without passing judgment.

A TV show like Black Monday is an example of this. It took almost seven years to get it on the air from the time Showtime bought the pitch. It was a broader comedy than Showtime normally produced. “You need persistence and tenacity when you really believe in something. How hard are you willing to fight for something?” You also need to consider what makes your TV show interesting years after it’s premiered.

“In the current political climate, we can make a  commentary on the world with our scripted shows,” said Micelli. “You want to watch characters that make bolder decisions than those around you. Even with period pieces, it’s a chance to project a contemporary theme. Stories which don’t make a commentary on the world, don’t really make it.”

“Having a diverse point of view helps TV shows stand out from the pack,” according to Michael Thorn from FOX Entertainment. Many of these diverse voices are telling their personal stories. This can only enrich the TV landscape.