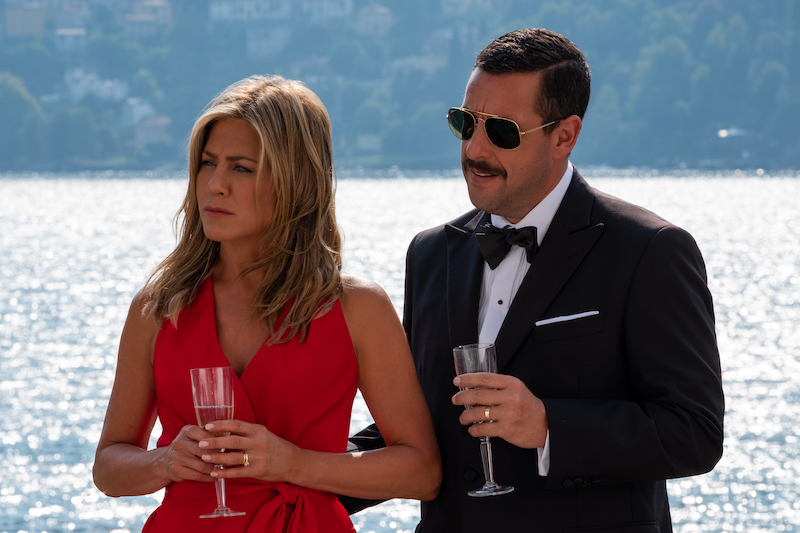 “What If An American Couple Crashes Into An Agatha Christie Story?” How Screenwriter James Vanderbilt Created ‘Murder Mystery’

Everybody loves a good whodunnit film. There’s a murder scene, a detective, and a group of equally motivated suspects trying to deflect suspicion or pin it on somebody else. Add a classy Mediterranean yacht, a goofy cop, his wife, and you have the elements for a Netflix film appropriately called Murder Mystery. Penned by screenwriter-director-producer James Vanderbilt, better known for Zodiac (2007), White House Down (2013) and The Amazing Spiderman (2012), Murder Mystery was a return to his mystery comedy wheelhouse. Vanderbilt spoke with Creative Screenwriting Magazine about martinis, mayhem marriage, and murder.

When asked what provoked the forgotten, farcical, Agatha Christie meets Inspector Clouseau film to take shape, Vanderbilt responded, “we were speaking with [producer] Tripp Vinson about these types of movies and why they can’t make them anymore. I heard that and insisted insists that now I want to make one.” However, the screenwriter knew that this style of movie needed to be updated to become relevant once again. “My way in was what if an American Couple from New York City crashes into an Agatha Christie story and finds themselves inside one.”

Vanderbilt was diligent in referencing the key TV shows and films that inspired the murder mystery genre during the development process. “Sherlock Holmes, Agatha Christie’s Poirot on the BBC, and The Thin Man” were key influencers to shape the story.” Vanderbilt named the main character Nick [Spitz] in Murder Mystery as a nod to Nick Charles, the detective in The Thin Man. “I also loved the idea of a married couple sipping cocktails and solving crimes.” The screenwriter was well on his way to making his next film.

The writer-producer admitted it took many years to get his film made. “It took a while because we had to find the right couple. There’s something so quintessentially American about Audrey (Jennifer Aniston) and Nick (Adam Sandler) which was baked into the DNA of Murder Mystery. Adam is an American everyman.” Vanderbilt later faced the daunting task of battling the orthodoxy and convincing Netflix to make an original film not based on any underlying works. “Seventy to eighty percent of studio films are adaptations, sequels, and remakes.” Murder Mystery also found its time, by incorporating an international cast and filming locations.

Vanderbilt referenced his personal travel experiences when making his film. “I went to Europe with my wife before we married and chose our destinations as filming locations. Everywhere Nick and Audrey go is where my wife and I went. We had a big night out and were woken by the Monaco Grand Prix. I thought I had to put this in the movie.”

The screenwriter discussed the countless incarnations and drafts that his screenplay went through. “The movie itself never really changed that much in terms of the basic structure. The killer was always the killer, but the set pieces of how Nick and Audrey eventually found the killer continually expanded and contracted. The thing that never changed was the mystery and that fact that Nick and Audrey were still in love with each other. That was the ‘true north’ of the movie.”

Although the screenwriter didn’t dramatically change the story through the rewriting process, Vanderbilt recalls trimming down the suspect list to tighten the screenplay. “We had a mother and son character right up until pre-production. I decided there were too many suspects to keep track of and they fell out of the movie right before we started shooting.”

Like all great comedy, Murder Mystery needed to be firmly grounded in real truths. “Despite their fifteen-year marriage being in a rut, Nick and Audrey were still in love with each other. I really wanted to make a movie that being married was a wonderful thing. It’s possible for a couple to be married for a long time, still love each other, be better together and more the sum of their parts than they are apart.”

This underlying theme of the beauty of marriage underpinned Nick and Audrey’s characters as a detective duo. This grounding was essential “because the film goes so nuts. There’s a guy missing an arm who wears an eyepatch. The reason we have permission to do all that crazy stuff in the movie is because at the center of it is a real couple who feel like they’re in a real marriage and really love each other.”

While writing the screenplay for Murder Mystery, the screenwriter carefully balanced these kooky and grounded elements. “The toughest ten pages of the movie were always the first ten minutes in terms of getting that right. If the audience believes that this is a married couple who’d been married for a long time, the rest of the story will fall into place. You can go crazy and bounce off the walls.”

Granularity and specificity of Aniston and Sandler’s relationship in the film had to ring true. “In an early scene, they are brushing their teeth together and debating whether to run the air conditioning or the fan. That’s a real married couple conversation.”

There’s also a plot thread in Murder Mystery pitting Claritin versus Allegra. The latter doesn’t work on Audrey. Relationship issues ensue. “Although it was played as a running joke, it was authentic. I have had this exact conversation with my wife.”

Vanderbilt also flexed his comedic muscle in making fun of the detective comedy genre. At one point, Audrey Spitz explains to her husband that their ongoing search for clues to solve the crime “is a trope of the genre.” The screenwriter described it as a “meta” element of comedy awareness. Jokes aside, the scene really nails their marriage in terms of irony and teamwork. “Nick was a cop with real-world case solving experience and Audrey was a hairdresser and a fan of mystery novels. They would approach the murder case from completely different places, but solve the crime together. Each has their theories on how the murder played out, and each is correct.” It wasn’t a case of Nick bumbling his way through while Audrey did all the work.

The screenwriter ensured that this wasn’t a cookie-cutter romantic comedy. The ebbs and flows of love in marriages is something he felt isn’t explored very often. “Most romantic comedies are about two people meeting and falling in love. For me, it was exploring what the spark in the fire was still about. This is a love letter to marriage. I love being married to my wife. It’s super fun, but not only in the first year. You go through different periods in your life with that one special person you care about.”

On the other side of the romantic love field, you see a transactional, dysfunctional, conditional kind of love. “There’s a rich family who all hate each other and they’re backstabbers.”

James Vanderbilt also took great care in choosing the careers of his main characters. “I loved the idea of Nick being a cop with a bad shot. It was a fun trait that gave me somewhere to go as a screenwriter. Audrey is a suburban hairdresser. She’s probably underestimated in terms of her intelligence level, by both herself and her husband. This dynamic vibrated at the right frequency. They felt like this blue-collar couple that I know.”

“The couple is going through a rut in their marriage and the rediscover what they like about the other person. When you’re in a long term relationship you can forget the reasons you fell in love in the first place. What does one do that makes you smile or excites you? Drawing on my own relationship, times of stress brings a married couple closer together.”

James Vanderbilt has no issue about shifting between film genres. The first screenplay he sold days before graduating from film school was a comedy. At the time he was typecast as a comedy writer. His agent sent him on a bunch of meeting for comedy projects and he turned them all down because he felt he couldn’t do them justice.

He sent a military thriller he was passionate about to his manager at the time. He berated Vanderbilt for going off brand because he was “a comedy guy.” His screenplay was later produced into a movie called Basic. This taught the screenwriter early in his career that he didn’t need to focus solely on one genre. “Some screenwriters stay in their lane, but for me, I want to do something different. I spent three years researching and writing Zodiac. Once I was done, the last thing I wanted to write was a true life or serial killer movie. I want to make something up now. A good story attracts me more than a good genre.”

Vanderbilt doesn’t have a strict screenwriting career plan. There are a few milestones he wanted to achieve such as directing his first film before turning forty. This goal was realized in Truth (2015) starring Cate Blanchett. “Since then I’ve been open to ideas and tried to be of service to movies. I go wherever the day takes me.”

The screenwriter-director has recently been more focussed on producing than screenwriting. He served as the producer in Ready Or Not (2019) and The House With A Clock In Its Walls (2018) and as executive producer on the acclaimed TV series Altered Carbon (2018.) James also offers his services as a Hollywood script doctor, putting a stethoscope to big-budget movie screenplays of which he receives no screenwriting credit.

James Vanderbilt was asked what inspired him. He read the Zodiac novel when he was sixteen and was determined to see it produced into a movie. Truth was adapted from a Vanity Fair article. He also reads a lot. “I keep notebooks. I jot stuff down. A sentence here… a phrase there. Five years later, I’ll pick it up again and it all comes together. Keep your feelers out and your mental connective tissue will help you turn it into a movie.”

Vanderbilt made a conscious decision to read for pleasure to replenish his creative juices and maintain balance in his life. ” I was defining my life by my career and that’s not how you should define a life. Being a father and husband and father now defines me.”

Hopes and dreams will only take you so far in a screenwriting career. “Some of the most talented screenwriters I met didn’t ever establish a career because they didn’t dedicate themselves to the work. The reason I’ve been successful is that I will outwork you despite not being the most talented writer in the world. I will keep trying to make a script better. The moment you stop learning in this business, or not improving your craft, is the moment you should hang it up. I hope to be doing this at eighty.”

The screenwriter advises there are no shortcuts to a successful screenwriting career. “Keep writing. Be brutal on your work. Find people you trust who will tell you the truth about it. Then keep rewriting. The only way to get good at it is to do it.”

State Of The Industry

The screenwriter views the current state of the industry as a boon for screenwriters. “The fact the Netflix is investing in so many resources into new and original content without any underlying IP is very exciting. There is more need for stories now than there has ever been in the history of our industry. Although traditional studios are making fewer films, more films will be made overall due to streaming services. The technology is changing as are the formats. The time constraints are coming off. The industry can accommodate your content no matter how long you need to tell your story, whether it be fifteen minutes or fifteen hours.“