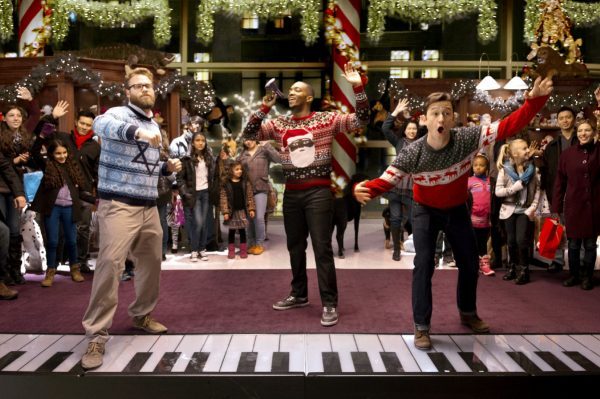 What Screenwriters Should Consider When Writing Holiday Films

Creative Screenwriting Magazine contributing writer Mark Sevi shares his thoughts on writing the next Christmas (or other holiday) hit. So get cracking!

THE WRITE TIME IS NOW

When should you write that holiday film? Any time really, but if you’re shooting for Christmas this year, start now.

Sure, we’re all a little burned out with the colors red and green, and if one more Christmas carol starts, I’m likely to (air) punch an elf, but I’m going to slip back into that holiday spirit and “ho ho ho” groan my way into the season that just passed. Now is the best time to start writing while the joyous festive spirit is still fresh in our screenwriting memories.

Working backwards from even the tightest production schedule, and targeting perhaps a streaming service for your film where a lot of P&A isn’t necessary, producers need a month to promote (December), a month for post-production (November), two months for production (October/September), and a month for pre-production (August).

That’s around June or July to buy something to be safe and account for snafus.  If you start writing now, you’ll have 4-6 months to write and sell your script. What are you waiting for? Christmas?

I’m going to be discussing all holiday movies including the less popular ones, but for the purposes of this article, I will be focusing on Christmas movies since they are far and away the most produced holiday films.

Nothing, and I mean nothing, gets read or produced in Hollywood without that all-important concept, which also means writing a logline that delivers. A concept that makes it easy to market the film once it’s made.

The business side of movies requires that as many people as possible are intrigued by any film. A weak concept doesn’t help. Write to market, and market like a pro. Give producers a reason to say YES and not anything else by showing you can handle both the artistic and business sides of your screenwriting career.

“A man who has recently lost his wife and suffered a mild psychotic break, believes he is Santa Claus and builds a drone-powered sleigh in his barn in Maine” isn’t exactly great, I admit – but it’s a more interesting concept and would lead to more people reading your screenplay just to see how that all pans out.

Plus, it takes an old concept (a reindeer sleigh) and modernizes it to a drone-powered one. Perhaps you could set your Christmas film in outer space and make it about a group of lost travelers who believe their Christmas is ruined because they can’t find a pine tree? Now you have a high-concept hook too.

If the said travelers proceed with their treeless festivities and realize that the spirit of giving and sharing is more important than a Christmas tree – you now have a story that audiences can emotionally invest in.

THINK OUTSIDE THE (CHRISTMAS) BOX

So concept, right? But where does that come from? How do you generate your ideas? You might start by looking at the current crop of ideas and give them a new, unique twist.

Scrooged took a familiar story (A Christmas Carol) and updated it hilariously with Bill Murray. It seems that every year we see a re-envisioning of this timeless story as it proves its worth over and over again.

Maybe you can hide the Scrooge story in something unique, like in a modern-day cabin in the woods with a man who has turned his back on society and has a stroke that leaves him paralyzed on the cabin floor? As he suffers, you have him being visited by all the ghosts of his past in the form of flashbacks, since he thinks he’s going to die. Maybe those “ghosts” are talking woodchucks or wandering bears as he hallucinates.

Another great twist is The Man Who Invented Christmas which is a funny, touching, and wonderfully conceptualized story about Charles Dickens, the original author of the book A Christmas Carol: A Ghost Story of Christmas that has become numerous plays and movies.

Here’s the logline for The Man Who Invented Christmas courtesy of Google:

“In 1843 London, author Charles Dickens finds himself in financial trouble after writing three unsuccessful novels in a row. Desperate for a hit, Dickens relies on real-life inspiration and his vivid imagination to bring Ebenezer Scrooge, Tiny Tim and other classic characters to life in A Christmas Carol, forever changing the holiday season into the celebration known today.“

What a great concept!  Don’t redo the book/movie/play yet again, but rather, write about the author (or the historical times it was created), and in the process also write the beloved tale. That movie has three simultaneous narratives and they blend incredibly well.

A similar treatment was given Finding Neverland about J.M. Barrie who wrote Peter Pan. That film garnered a score of Academy Award noms including best picture and adapted screenplay when it was released. It’s a proven paradigm.

What do you know about the Santa Clause legend? Maybe you want to subvert it and write a Krampus film? How about taking the name literally and making it a Santa Clause by which you have to become Santa once you don that suit? What might a film called Santa Claws look like?

Ideas are everywhere if you just look. As an example, I was playing a trivia game with my family over the holiday.  A question about the poem by Clement Clark Moore “A Visit from St. Nicholas,” a.k.a. “Twas the Night Before Christmas” came up.

Remember the line “visions of sugarplums danced in their heads?” How many years had I heard the line and never once wondered what a sugarplum was? Until then. So I looked it up.  And so should you.

Magical sugarplums that entice elves? Okay, that’s a start – at least it’s different and might get someone interested in my script if I was to pursue it.

Christmas is a wondrous time for many filled with food, fun, and… family. Emphasis on family here. But what if you were accidentally left by your family, alone, during Christmas. And two grinchy bad fellows were trying to break into your house?

Or take one aspect of the holiday and expand it. How about shopping madness (Jingle All The Way)? Trying to get home for the holidays like in Planes, Trains, and Automobiles which isn’t a Christmas movie per se, but a Thanksgiving movie – another big holiday subject since it focuses on two strong themes  –  family and gratitude.

If you want to rise above the noise, get a great concept.  Or twist one into recognizable themes such as The Nightmare Before Christmas, Elf, the deliciously depraved and hilarious Bad Santa, or even Office Christmas Party.

How many can you think of that have to do with the holidays? Theme is essential to telling a good holiday story.  There are positive themes: family, faith, joy, giving, receiving, redemption – and negative themes (see the same list).

Faith is huge, especially for Thanksgiving and Christmas. Easter is a religious holiday, so of course, faith is baked in. Should your screenplay be faith-based? Why not? You’d increase the likelihood of it being sold since you’d open another market. But it doesn’t have to be since Christmas is a secular holiday observed in most of the world.

We want to feel good about the holidays and too many times the reality is less than we hoped for. Adding strong themes of redemption and faith will help your screenplay soar and give your audience what they’re seeking either consciously or subconsciously.

Examine all the Christmas movies you’ve seen. Even the profane Bad Santa has strong redemption and transformation themes as the Billy Bob Thornton’s character finds a reason to change his cynical and self-destructive ways because of the unconditional love of a child in need.

The granddaddy of them all, the story that basically created Christmas, shows a cynical and horrid man, Scrooge, becoming open and joyful to the spirit of the season where once was a closed heart. He is also similarly transformed, at least in part, by a child in need – Tiny Tim.

Miracle on 34th Street tells a magical tale about a man who claims to be the real Santa Claus. Some might find the movie treacly and cloying, but I always find myself immersed in the spirit of the film which speaks to what many feel Christmas is about: faith and hope.

I’m also a sucker for White Christmas which has some great music and dancing in it but at its core it makes me happy to have family and friends who care about me and reminds me to be always hopeful. Exactly the way I want to feel during the holidays.

And of course It’s A Wonderful Life which hits the themes of sharing, gratitude and family really hard all throughout.

We come to genre films like holiday movies for familiar themes and tropes. These familiar themes make a film a film we want to see to make us feel a certain way. Hopefully, they haven’t become so clichéd that we groan when we see them – but that’s your job – to elevate the work. Use familiar story beats in unfamiliar ways.

That’s partially why I distinguish between movies that only take place around the holidays, and movies where the characters are transformed by the holiday, be it Thanksgiving, Christmas, Easter, or Hanukkah.

Are you noticing the recurring patterns in these films? The magic lies in the power of the combined humanity that connects us. Why can’t a Christian enjoy a Hannukah film as much as a Christmas one?

I find it amazing that horror is so big during the holidays. I must admit that I am no fan of horror films during Christmas, but there is an entire industry built around the phenomenon of counter programming.

The film that started this present day horror-for-the-holidays trend is Black Christmas so it makes sense that it would have been released around the holidays. Even though it was first shown in Canada in October 1974, it had a U.S. December premiere.