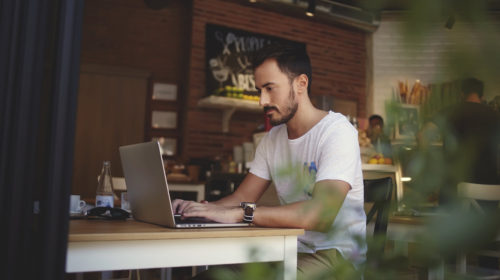 What You Should Never Ask A Screenwriter

Is being a screenwriter a real job? One that regularly pays the bills and affords all screenwriters a luxury lifestyle? To answer the first questions. Well… if you dedicate your career to screenwriting it is. Second question… yes if you’re staffed on a TV show, no if you’re a freelance writer. Third question… We can dream. Creative Screenwriting journalist Annie Banks has the scoop when people ask you what you do for a living and assorted questions we frequently face.

There are a number of professions that cause people to raise their brows and mumble under their breath, but screenwriting is one occupation that really seems to pique surprise.

Despite the underlying common courtesy, here are some general questions in conversation to never ask a writer, no matter how pressing they may seem to be. So, that’s your real job? – Yes, it is. We’ve probably heard this question one hundred times before, and we’ve probably had to exhaustedly navigate throughout answers to explain that yes, writing can be a profession. In all honesty, it isn’t the most ludicrous job. There’s a rise in demand for screenwriters, though the entertainment business may be grueling. Professional writers are everywhere, so this is not the most foreign concept.

Is (Are) your spouse/friends/family/parents supportive? – This is more of an underlying statement of pity than a genuine statement of interest. It translates to the idea of that there was some sort of discouragement from writing, and that those who have supported us have been the only ones cheering us on. That isn’t exactly the case. The support may be nice, but it doesn’t mean that screenwriters are dependent beings that need to leech onto some source of ongoing support system just to meet a deadline.

Oh, you’re a writer? My dad’s friend’s cousin’s neighbor is a screenwriter. Should I ask them to give you some advice? – This one may be far-fetched, but it does happen. Not all writers, especially screenwriters, want some pair of outside (and possibly inexperienced!) eyes picking apart their work to edit it. Networks exists for a very important reason, as do guilds and writing societies. Although the proposition to connect two distant writers may sound nice, it’s unrealistic and condescending.

Oh, you write? Can I have your job? – Nice try. Screenwriting isn’t as easy as it seems, and it takes an expansive amount of discipline and training to really get ahead in the professional field. Verbally, it may sound like a simple occupation to tackle, that most anyone can handle. Yet the competitive reality and the details that come along with it are daunting.

What advice can you give to a writer that only writes as a hobby? Please, don’t belittle screenwriting to a hobby to a screenwriter’s face unless they consider it one themselves. If it’s a hobby, that’s great! But seeking advice from someone who takes it a little more seriously isn’t the wisest idea. This doesn’t discredit screenwriters who write as a hobby, either. That’s so much fun! You just sit around and write all day? Not exactly, but that would be wonderful. Screenwriting is not just sitting down and pouring ideas onto paper. If that’s how it worked, everyone would do it. There are steps, processes and deadlines that need to be followed. It’s a deeper, more complex and more in-detail that it appears to be on the surface. A large part of the job is networking and hustling for your next writing gig. Hustling? Don’t make it sound so seedy.

How do you have the time to write nowadays? Excellent question. We’re writing. All of the time. Writing seems to take up most of a screenwriter’s time, if anything, writing is a time consumer within itself. There are plenty of time-restrictive aspects that heed time inside of the profession.

Do you spend most of your day in a coffee shop pretending to write? It’s not pretending. Screenwriters churn out a set number of pages each day.

Can my life story be your next project? Sure, we all want to be painted onto the silver screen. That doesn’t mean it’s going to happen anytime soon, as mean as that may sound. A biopic is not fresh, new material. They often follow the story of those who had made an impact or stand out influentially one way or another.

So are you going to move to L.A. and sign with some big studio? Isn’t that the dream? Everyone in the entertainment industry wants to head west where the root of culture evolves. A slim-to-none chance of prosperity is gambled while trying to find work with top-notch producers to even glance at your screenplay, let alone have an interest in investing further.

Aren’t you wasting your time trying? Not necessarily. There’s always something to chase after, and there’s always another step forward as a writer.

Like anything, screenwriting takes time, practice, discipline, and failure. To not succeed is to fail, and to fail is another given opportunity to move forward again.