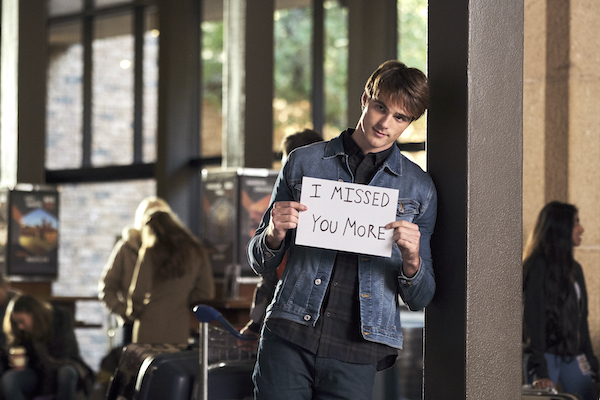 “Where Do You Want To Be In 5 Years Time?” Screenwriter/ Director Vince Marcello Answers In ‘The Kissing Booth 2’

Filmmaker Vince Marcello cut his storytelling teeth in the theater world in New York City. He later segued into the teen film space with Teen Beach Movie movies for Disney and Liar, Liar, Vampire for Nickelodeon. He continued his foray into teen comedy when he read The Kissing Booth: Going The Distance by a young novelist called Beth Reekles. Tapping into his love of teen romance films including Grease, Legally Blonde, & Clueless he put his stamp on The Kissing Booth movies.

After the phenomenal success of the first The Kissing Booth in 2018 the time was ripe for its sequel. This time around, heart throb boyfriend Noah Flynn (Jacob Elordi) goes to Harvard, Elle Evans (Joey King) goes to the University Of California in Berkeley, and Noah’s brother Lee (Joel Courtney) becomes Elle’s bestie at the expense of his girlfriend. Vince Marcello spoke with Creative Screenwriting Magazine about his writing journey through The Kissing Booth world.

The first film had was largely faithful to the source material, whereas the sequel allowed Marcello to further flex his writing and directing muscles. “During the process of development [for the first film], there was a larger story that was written.” Given the length of the source material, it was always a balancing act between drawing the colorful characters and their respective journeys while compressing the story into a two-hour movie.

The Kissing Booth 2 is billed as a teen romantic comedy, but Marcello claimed, “It really is a coming of age story about three kids – Elle, Noah, and Noah’s brother Lee.” The romance elements certainly come into play, but the character arcs of these children becoming adults is the spine of the movie.

Elle Evans is the protagonist of this story navigating the blurry and contradictory world of landscape. “Elle is finding her own voice and figuring out who she wants to be. Lee is a man-boy finding his way through relinquishing his childhood and moving onto adulthood. Noah is a big, strong wealthy person used to getting what he wants.”  The first film focuses on Elle while the sequel expands its focus on all three characters in a love triangle of sorts – Elle’s friendship with Lee and her relationship with Noah.

Vince Marcello co-wrote The Kissing Booth 2 with Jay Arnold who shares a similar sensibility. (Marcello wrote the first by himself) “Each partner brought different, complementary elements to the project. Furthermore, when it goes through a different filter, great things happen.” As a director, Marcello considers himself a structuralist which is a handy quality to possess as a writer/director. “Jay [Arnold] brought a certain level of whimsy to the film to elevate it and I brought a little more romance.”

The Kissing Booth has a special significance to the story and is a bona fide character unto itself. The Kissing Booth is both the title of the film and a place where they all hang out. It has deeper importance to the story because it is a place where the characters can “admit and discover their feelings towards each other. Especially in KB2, this kissing booth starts to take on its own identity.” It is a crossroads. An intersection.

“It is a place where relationships can be mended, questioned, and celebrated. It’s a temple of fixing, ending, and the beginning of love,” said Marcello.

Screenwriters approach adapting a novel into a film or television series in a variety of ways as the balance the spirit of the source material with their own flair. The screenwriter liaised with novelist Reekles on his approach to the film. Fortunately, she was agreeable to Marcello’s ideas.

“Adaptation is like a puzzle to me, because you start with more pieces than you need,” confessed Vince Marcello. He decided early on in the process that it was going to be a character-driven piece with plenty of internal dialogue from Elle Evans the protagonist and started the writing process from there. “Because Elle’s first-person narrative was so strong in the book, you have access to her most personal thoughts.”

During his first pass at the screenplay, the screenwriter combed through the book to extract the scenes that were most active and cinematic to lay down the basic story structure. Static scenes of people talking in a room were quickly removed. If they contained essential story information, they were rewritten in a more active form.

“During the next step, I wanted to invoke something charming and nostalgic for people.” As a self-confessed lover of John Hughes’ films,  the filmmaker’s strong influences in The Kissing Booth 2 are apparent. “It became a joyful homage to these timeless movies that I grew up with that were so formative.”

Marcello then turned his attention to the key set pieces next with the aim of, “slightly heightening them comedically, but still rooted in real problems all these kids had.”

It was imperative, that despite tapping into the eighties complexion of Hughes’ films, both The Kissing Booth movies felt modern and current. Marcello engineered the eighties aesthetic, “ranging from hairstyles, fashion, dialogue, to the music,” to feel modern, but balanced this with vintage cars from yesteryear as his, “love letter to classic L.A.” This approach made the film appear less of the moment and more timeless. “Ultimately, it’s the topics and the themes that people care about.”

Marcello deliberately limited the use of social media, although there are text messages aplenty. “The moment you focus on social media, you drive the film into a specific time period and lose its timeless quality.”

Teen romantic comedies and coming of age stories typically target the 14-25 year old demographic. Marcello’s dual ‘of a time’/ timeless approach to his storytelling extended the demographic into an older 25-45 year old audience. “It was very gratifying to hear older audiences say, ‘Gosh, why don’t they make movies like this anymore?'”

Most screenwriters infuse their personal experiences into their screenplays no matter how well-defined the source material. “The thing that made The Kissing Booth 2 so unique and personal was the boy-girl friendship between Elle and Lee without the sexual undercurrents. ” Marcello recalled his own experience having a boy-girl friendship during his teen years to mold this relationship. “This dynamic really resonated with me. There were actual moments in the film taken from my life to create some very genuine and authentic moments between Elle and Lee.” He cites the scene between Noah and Elle trapped in a closet which was based on a real-life anecdote of Vince and his female friend hiding in a closet for five hours when they played hookey and his friend’s mother unexpectedly came home early.

Apart from themes of leaving home to go to college and juggling regular relationships, Vince Marcello explored the emotions experienced by the characters including their fears and anxieties about college and whether their relationship will survive. “The Kissing Booth 2 mines the idea of how vulnerability and insecurity can lead to self-sabotage.”

He also explores keeping things from others to protect their feelings. But, as in many movies, they always find out and make matters worse. “This steers Elle and Noah towards truthfulness in their relationship.”

Where Do You Want To Be In Five Years Time? This is the central question that hovers in Elle’s mind throughout the film as she contemplates adulthood. “It’s this concept that we are in the process of being something,” muses Marcello. “We should spend more time on who we want to be, the kind of person instead of where we want to be.” The acknowledgment of this idea will lead us to have more fulfilled and realized lives. “The ‘who’ you want to be will eventually lead you to the ‘what’ you want to be.”