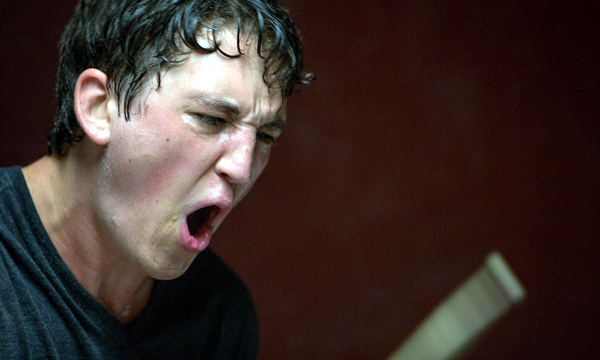 The Whiplash screenplay first drew attention when it appeared on the 2012 Black List. As a method of gathering financial interest, writer-director Damien Chazelle isolated one scene from his script and produced a short movie that screened at the 2013 Sundance Film Festival. This led to the feature starring Miles Teller as Andrew, a young student dedicated to forging a career as a jazz drummer, who meets his match in formidable teacher Fletcher (played by J.K. Simmons). The film took the grand jury and audience awards at the 2014 Sundance film festival.

The movie is based on your own past experience as a jazz drummer – how did you come to decide to use your experiences for a script and what was most difficult about translating something that happened to you specifically into a universal story?

I think from the outset I found it very helpful, because it wasn’t like I had to construct a world from the ground up, this was a world I really knew. I could remember the details I remembered and put those on the page. The autobiographical-ness was largely a help and it was one of the fastest writing processes I’ve ever had. The script came out very quickly. After the initial draft, there was a lot of rewriting to be done however. I may have written that first draft in a week and a half or so, but then I rewrote it for a year. I would sit on it for a few months and then come back to it, as I needed to get some distance as it was just so personal. I had to try to get other people’s reads on it too, to see that it was working for other people. I had to winnow it down, tighten it, and bring out the scenes more clearly.

Did you do anything to make the true story more dramatic and to build suspense? For example, I’m thinking how there’s a scene in which Andrew is in a car crash right before a show, did that happen to you as shown?

A less dramatic version of that did happen to me. I was borrowing from stuff I’ve been through and then condensing it for dramatic purposes. For me, I was in a car crash and I did walk away in a daze. I didn’t play a show that day, but it was the next day and my hands did bleed over the drum kit because it was too soon after the accident. My life inspired that idea, but the events were brought closer together to make for a compact narrative.

The relationship between Andrew and the girl that he is dating, Nicole, is unusual in that it does not play out in the clichéd way that is usual of films about dedicated musicians. It’s actually really refreshing that Andrew lets her know it’s not going to work early on and just abandons the idea of dating. What was your thinking in handling it that way?

I was trying to convey Andrew becoming an asshole and becoming a mini version of Fletcher. Andrew and this girl barely know each other, they’ve not been together a year, she’s not his wife, but he purports to know her fully. He thinks he can see into the future and what she is going to be like. That’s what Fletcher does to Andrew when he first goes out in the hallway with him. It’s like using someone’s personal information against them. Using the fact that someone was vulnerable to you in a moment, as Nicole is to Andrew on their first date, and taking that vulnerability and lobbing it as a weapon, right back at them. It’s the lowest low I can imagine a human being sinking to. It’s about that cruelty and arrogance. It’s also about putting a human face on the consequences of those actions, as it’s the first time Andrew’s actions affect people outside of himself. I made the choice to play the scene largely on the actresses’ face, that’s where the scene lives, it’s not really about Andrew as this is just a scene he’s cooked up talking to a wall and now he’s delivering it as though she is that wall. We can see what he can’t, that she is not a wall and there’s a human cost to what he’s doing.

In way, the romance of the movie is actually between Andrew and Fletcher – they are in a passionate and tumultuous relationship. In the beginning Fletcher seems to be flirting with Andrew and then there’s this undercurrent of all of Fletcher’s homophobic insults. Was that your intention?

Yes, they sort of can’t live with each other, but they can’t live without each other either. It’s a twisted, sick love story between these two. For better or for worse, they kind of deserve each other. Andrew has to become a mirror-image of Fletcher. Fletcher’s way, how he is, doesn’t change much. Andrew starts as an unmolded kid, who could go in any direction. He’s passionate about drumming, but he also wants to ask a girl on a date and he likes hanging out with his dad. You can see him choosing a number of different paths, but then he becomes Fletcher 2.0. Fletcher is the catalyst for the change and Andrew is the one who goes on the journey.

J.K. Simmons as Fletcher and Miles Teller as Andrew in Whiplash

I always have this voice in me screaming at me to do better. Many artists don’t even need a Fletcher in our life per se, we can be our own Fletcher. I’m very hard on myself and very ambitious. I have a constant fear of failure that motivates me to work harder and do the rewrites. That said, I’m a big procrastinator. I have trouble facing the blank page. I usually have to sink to a level of self-hatred before I can really get proper words on the page. I wish it was easier. When I was a kid, creativity was innocence and fun. I would procrastinate on homework to do creative things like drawing and writing stories. I wish I could tap back into that. I don’t think I ever had a problem filling the blank page back then. The more you do it professionally and the higher the stakes become, the harder it gets to actually do it, ironically.

In the film, Andrew struggles with grasping tempo, which you’ve pointed out elsewhere is a pretty serious issue to have as a drummer. As a screenwriter what do you struggle with that’s similarly essential to that creative process?

I have trouble with knowing whether the audience is going to get everything I want them to get and whether they will emotionally be where I want them to be at a certain point. It is overarching, large structural issues. I have always found it easier to work in a localized way, scene by scene, and making a scene on its own compelling. Where I run into more trouble it’s when I look at the work as a whole and figure out how it fits together. Rewriting is where I pull my hair out the most. But then, contrastingly, at least with rewriting you aren’t staring at a blank page and I still have this terror of the blank page. Maybe my biggest Achilles’ heel of all is writing in the first place, getting over the first hump and filling that page. I have an especially hard time with building up the will power to carve a hole in the blank page.

The structure of this film seems somewhat similar to a sports genre movie – would you agree?

I wanted to make the movie more physical than most music movies. I wanted to capture the physicality of what it means to make music on an instrument. Especially as today so much music is made electronically. I wanted to show the toll it can take on the body. Doing that, you are immediately putting yourself into this world of physical movies, movies about dancers and athletes, or action movies and movies about bodies in motion. Also, it’s a movie about competition and this person trying to be great at something and he’s building up to the “big game” in a way. I probably didn’t realize that after the first draft. It naturally wound up that way.

So, your next project is a musical feature, La La Land – what’s that about?

Tonally it will be very different, but it’s again about balancing art and life. It’s a love story about two artists who meet and fall in love and share their dreams together. They have to balance art and love. It’s an old-fashioned Hollywood love story and musical. It’s a genre that I love and I’m very passionate about. I always knew how I would do a musical, which is probably not the same as how everyone else would do a musical. I want to do my take on it. I’m working with a composer and songwriter, but it’s not a sung-through musical, there’s dialogue and then numbers and then dialogue and then numbers. It’s a big collaboration. We’re in soft-pre-production and we will start shooting it in Spring of next year.