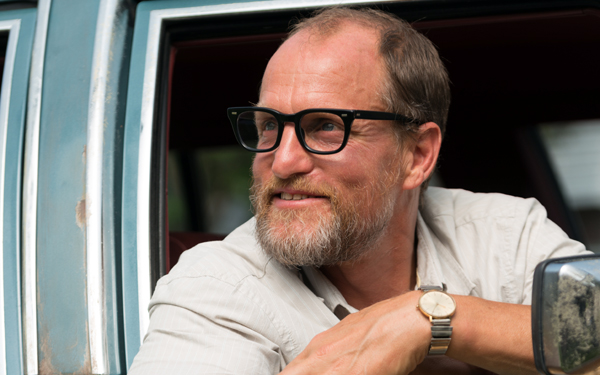 In Wilson, Woody Harrelson portrays a middle-aged man seeking an honest human connection in a world where most people just want to stare at the screens of their cell phones and laptops.

Because of that, Wilson comes often comes off as obnoxious, overbearing, and unaware of social boundaries. Yet for all his faults, Wilson is at least one thing – brutally honest. And nothing brings out that honesty quite like when he finds out that his ex-wife Pippi (Laura Dern) had a daughter that she put up for adoption shortly after they broke up.

Wilson has been adapted by Daniel Clowes from his own graphic novel. It is the third he has adapted in this way, following on from 2001’s Ghost World (co-written with director Terry Zwigoff, for which they received an Academy Award nomination for Best Adapted Screenplay),  and 2006’s Art School Confidential.

Creative Screenwriting spoke to Clowes about the films that influenced Wilson, how he developed his screenwriting process, revisiting Ghost World for its upcoming Criterion Collection release, and his next project, a screenplay adaptation of his 2016 graphic novel Patience.

How did the screenplay for the film adaption of Wilson come together?

The book is an experimental graphic novel. It’s the story of a guy’s life made up of about 72 single-page comic strips, none of which are continuous. They’re all just moments in this guy’s life. The story is really what you interpret happens in between each strip.

When I began to think of it as a movie, I felt like I had a character that I knew intimately, which to me is the most important starting point. This is a guy I could put into any situation, and I would hear his voice and he would tell me what to write. That’s always the best thing that you can hope for.

I also had this barebones outline of the story that existed in the book. That was the perfect thing to have to begin a movie, because that made me feel like I wasn’t really beholden to capturing anything in the comic, so much as bringing this character to life in a different medium.

You’ve said you were influenced by Charles Shultz when you were creating Wilson.

Yes, I first came up with the character after I read Schulz and Peanuts: A Biography that came out in 2007. In it, Shultz says something like, “Any cartoonist that’s worth his salt can come up with a serviceable gag in five minutes.”

I remember thinking that I thought of myself as a pretty accomplished cartoonist and I didn’t think I could actually do that! [Laughs]

So I forced myself to sit down with a notebook and come up with comic strips in five minutes without thinking at all – just through sheer instinct. What came out was this character Wilson. He emerged fully-formed on the page and suddenly I couldn’t stop writing these strips. Not only did I write a gag in five minutes, I must’ve written twenty an hour a few times. Obviously not all of them are great, but it felt real.

I think it’s also interesting that you created a screenplay for Wilson out of these short, detached comic strip episodes, and Shultz did the same thing when he created the Peanuts TV specials and movies.

You’re the first person to mention that, but it’s something I thought about a lot. The TV specials are really in the spirit of the characters, but they’re so different than the magical thing he was doing in four panels a day.

All the choices he made were so smart. Even just to give them actual kids’ voices, which nobody did back then, and to have the adults just be that honking noise in order to eliminate all the details that you don’t need. I think those are really successful adaptations of a strip in a very different form.

Wilson has such a unique personality in the way he interacts with others. What drives that aspect of his character?

I think of him as sort of a walking id creature. The way he was originally written was just unfiltered straight from the back of my brain onto a piece of paper. He’s not only saying the things you might want to say, but he is the way you might want to be in some pure form if you didn’t have any concern for or interest in social niceties, or all the codes that we have to enforce in our social interactions.

In fact, he’s opposed to those kinds of things. He just wants to meet somebody and immediately be talking on this higher level that we might only get to with our friends after ten or fifteen years of intimately breaking down walls to get to know them. He’s not willing to go through all that. [Laughs]

He hopes with every encounter that he can have that deep, meaningful conversation. And when his methods repel people he’s angered, discouraged, and ready to give up on that one and move on to the next. His personality is a self-regenerating engine.

Wilson is the third feature adapted from your comic work. What are the biggest challenge with adapting your comics into screenplays?

It’s maintaining the tone of the books. That’s my main concern.

The spark of inspiration that made the comic something compelling to me needs to be carried as much as possible to the final version of the script. I feel like once I’m done with the script that’s as far as I can carry something. Then it’s up to the filmmakers.

I wanted the spark of life in the script that could potentially lead to a movie that would carry on the spirit of Wilson.

Has your adaptation process changed at all since writing the screenplay for Ghost World?

Yes, because I didn’t really have a process when I wrote Ghost World! [Laughs]

On Ghost World I started by trying to transcribe the comic into Final Draft. I figured that’s how you do an adaptation. Then I tried throwing everything away and writing an entirely new story that was very different from the book. And I synthesized those two things into a final screenplay. The actual film itself is very different from the script we wrote. We ended up jettisoning the last twenty pages and rethought the whole thing as we were filming. It was really held together by hair and spit.

Since then at least I know how to begin. I know how to approach the material in a way that I feel I’m most comfortable with. I know how much to plan out in advance, and how much space to leave myself for improvising. It’s a lot less crazy a process.

Speaking of things changing, Wilson appears to have a happier ending in the film than in the book. Did anything prompt that change?

Again, that’s something that’s not necessarily the case in the script. I think it was the nature of Woody Harrelson being Wilson that kind of dictated how the ending would go. After talking with Craig Johnson, the director about it, he felt that with the way the performances went, and how the film organically went together, that it pointed to a slightly less dour ending. Although it’s really just a matter of cutting – if you cut on the baby’s face like two seconds earlier, it becomes a much darker thing.

A hint of disconnection undercuts the whole thing. It’s really a very subtle, tiny moment at the end that kind of tweaks it one way or the other, but I feel it’s still pretty ambiguous. [Laughs] I actually felt that the ending of the graphic novel had a certain hope to it, although it’s a slightly different version of that hope.

Do any films influence your work on comics?

Many of them. I’m a big film buff. Before I start a book I’ll often have films as much as anything else dictating the style I’m looking at.

Wilson the comic was very much based on old comic strips, but I had in mind the tone of Hal Ashby movies, and movies like Carnal Knowledge – the kind of movies from the 1970s that have these complicated characters that are not necessarily meant to do anything to make us artificially like them. I had those kind of rhythms in mind, but that probably came out more in the screenplay than in the comic.

The last book I did, Patience, was a science fiction book, and the references were films like Alphaville, Barbarella, and Lee Marvin films – a lot of references that are very specific moments.

Criterion has announced that it is putting out an edition of Ghost World. What are your thoughts on that?

It’s a big thrill to finally be on Criterion. They were trying to do Ghost World when it originally came out, but the studio didn’t give it to them until recently. It’s been a long time coming, and they’re just an amazing company.

Terry Zwigoff the director and I did an audio commentary, and I did a new painting for the cover. There’s a lot of archival stuff in the booklet that has never been seen before.

It was really fun to go back and revisit it and be in touch with all the actors again. I hadn’t seen it since right after it came out. I saw it so many times that I was just burned out on it.

Seeing it again was very strange. I actually thought I would finally be able to see it as a movie without all the burdens you have when you’re too close to something, but I still thought during every shot, “Oh, I was standing over here when that was filmed.”

I remember there was one scene we were watching, and Terry and I both said at the very same time on the commentary, “Scarlett Johansson was in a bad mood that day, and it comes through.” [Laughs]

At the end of last year Focus Features announced it acquired had the rights to Patience, and that you will write the screenplay. Are you working on that now?

I am working on that right now. I should be working on it right now! One day everything is going great, and the next day it seems like a total disaster. But that’s another thing I learned over the years – to not let that discourage me! I know that there’s a big fluctuation every day. Right now I’m feeling good about it.

Patience is your longest work, so is that posing any challenges?

It’s interesting – I thought that I was going to have to chop stuff, which would be the first time. Usually I’m having to add material. But it’s actually turning out to be the right length in the way I conceived it, so that’s one of those things you never know when you start. It’s magically working out in that way, so I take that as a good sign.