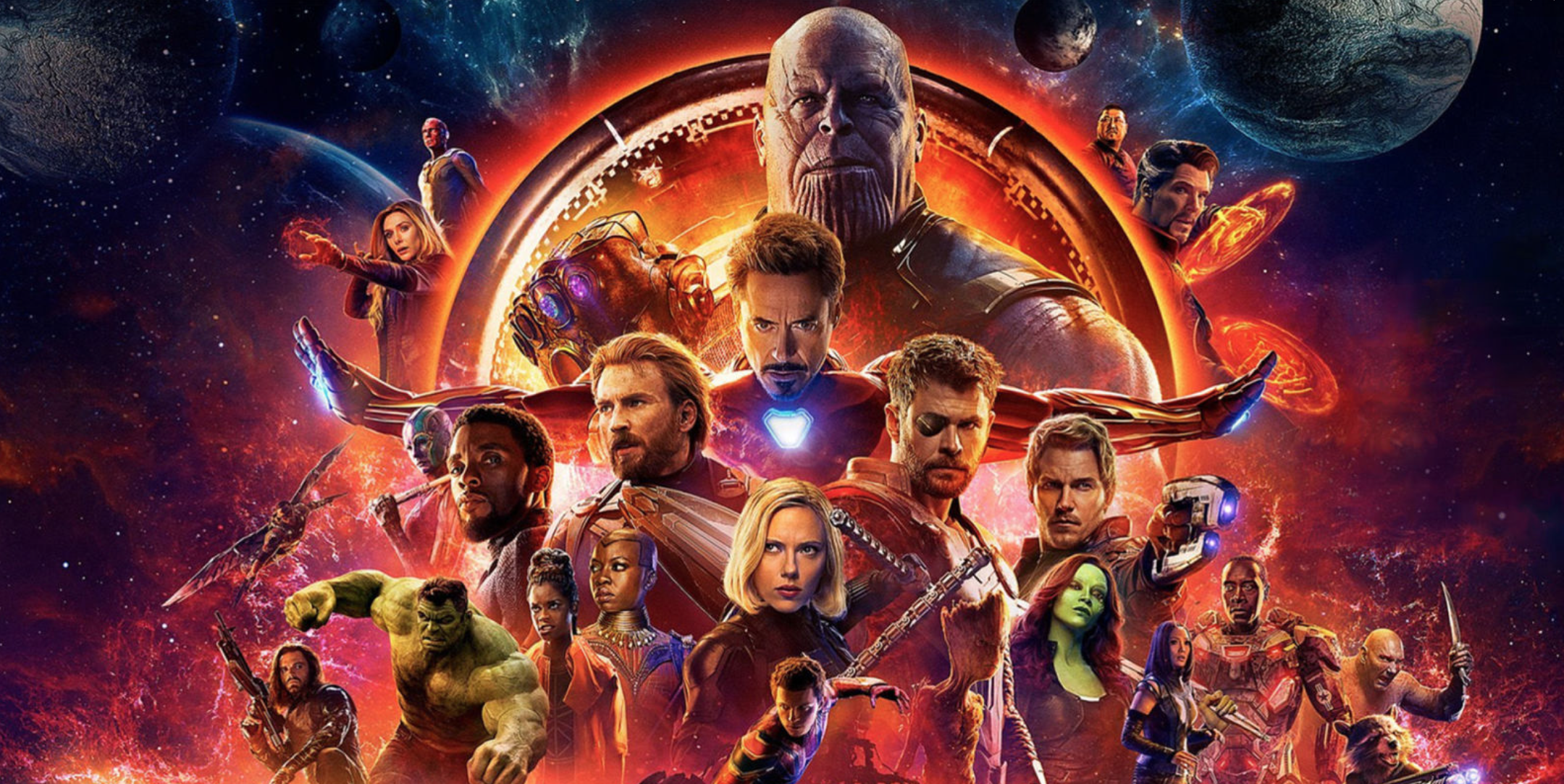 Now that Marvel Studios’ ginormous, star-studded, all-hands-on-deck, tentpole “Avengers: Infinity War” has opened and broken worldwide box office records with a take of $630 million worldwide, plot spoilers are everywhere. Thus, this review can critique the whole of the movie, not just its basic premise, and more wholly address the controversies and shocks dominating most of the chatter across social media. The funny thing is that most of the spoilers have been out there since 1991 already when the six-issue “Infinity Gauntlet”, on which it was based, was published. As if that wasn’t enough, the Marvel Cinematic Universe (MCU) has been trumpeting the pending slate of films on their docket all over TV and online, defying some of what this new film would have us believe about various characters’ fates. In a way, this is a movie that must be doubly critiqued – for what appeared onscreen and all that swirls around it offscreen as well.

For starters, bringing the onscreen and offscreen issues into one, this is a movie that does not stand alone as its own entity. It will be lost on an audience that isn’t familiar with the previous 18 Marvel Studios films that set up all the characters, conflicts, and various plots that have led to this epic showdown. Ten years in the making, waiting for all of the origins stories to fall into place in the MCU, “Avengers: Infinity War” is not for the uninitiated. It brings together over a dozen superheroes, almost 40 major characters, and 31 returning stars. Good thing their names don’t appear onscreen until the end credits, otherwise the film would take infinity to get started. And it’s the first of two parts, with its conclusion making its way onto screens in the spring of 2019.

Even with all that to squeeze in, and wait on, this film does a spectacular job of getting going right off the bat, bringing all those heroes and stories together quickly and deftly. The movie also immediately starts mixing up the combinations of characters with cross-overs happening with many heroes who’ve never met each other. Tony Stark meets Dr. Strange, Thor meets the Guardians of the Galaxy, and so on. This film expertly blends the fresh with the familiar. And in an expansive running time of 149 minutes, the film rarely drags. It also manages to juxtapose comedy right up against tragedy with ease. Despite the fact that most of the discussion everywhere concerns the film’s last 10 minutes, it is the previous 139 that deserve the most conversation. That is where the film succeeds spectacularly.

“Avengers: Infinity War” is truly at its best with those unusual character combos coming together. What brings them together is an intergalactic villain named Thanos (a motion-captured Josh Brolin) who is steamrolling through the universe collecting Infinity Stones to help him conquer all the cosmos. The collision course with this baddie makes for strange bedfellows on the Avengers side. Watching narcissistic brainiac Stark (Robert Downey Jr.) match wits with the equally cerebral Strange (Benedict Cumberbatch) is a treat not only because their needling banter turns to begrudging respect, but because of the subtext of seeing two Sherlocks go toe-to-toe with one another. And adding Tom Holland’s Spider-Man into the mix, trying to keep up with these two sparring adults, makes their scenes brim with all the more ego and cheeky humor.

Equally as amusing are the scenes where Thor (Chris Hemsworth) joins forces with the Guardians of the Galaxy. He manages to fit into their merry band of misfits, cracking wise and busting balls, like he’s the missing Marx brother. Watching the insecure Peter Quill (Chris Pratt) fret as his team gushes over the new he-man in their midst yields some of the film’s biggest laughs. Gamora (Zoe Saldana) coos, “It’s like his muscles are made of Kryptonite fibers.” Take that, Star-Lord, and while we’re at it, you too, Superman of the DC Universe!

As various groups form to battle Thanos in his stone quest, the film starts to take on a bit of the feeling of “It’s a Mad, Mad, Mad, Mad World.” All these stars, all these arguing characters, reluctantly forming partnerships, isn’t that far off from Sid Caesar, Jonathan Winters, Ethel Merman, and the dozen other comic characters coming together in similar ways to find stolen loot in that classic 1963 farce. This film brings a ton of comedy, but it also juxtaposes its pathos effectively up against all the laughs.

With over two dozen characters gallivanting about in this one, it’s inevitable that some get shortchanged, forced to recede into the background. Captain America has a supporting role at best this time out, with little to do until the finale. The same goes for his compadres Black Widow (Scarlett Johansson) and Falcon (Anthony Mackie). Other characters fare better, including some that pack a wallop like never before. Paul Bettany and Elizabeth Olsen, as Vision and Scarlett Witch, are standouts here, shouldering a significant portion of the story’s emotional heft. Saldana carries even more, what with Gamora’s relationship to her step-father Thanos and the actress runs with her character’s devastating arc.

And considering that Thanos is a big CGI behemoth, the character comes off as entirely believable alongside his human scene partner. He’s easily one of the best villains put on the screen in some time, and probably MCU’s best since Loki. Kudos to writers Christopher Markus and Stephen McFeely, directors Anthony Russo and Joe Russo, a wisely underplaying Brolin, and oodles of computer graphics artists for making Thanos so worthy. He’s not only an understandable villain, but he gets the most screen time of any character in the film as well.

Thanos has an ax to grind because he saw his home planet of Titan destroyed by overpopulation and when he attempted to save its resources and citizenry by suggesting a lottery that would mercifully take out half the population, his planet elders balked. His idea was genocide, of course, but Thanos’ justification is not some crazed rant. Rather, he’s a calculating politico looking at the bigger picture, even if it’s incredibly harmful to get there. Learning from his attempt at winning over others, he has changed tactics and will now merely brawl his way to gain the gems that will help him put his plan into action. Once he has the six stones – Mind, Soul, Space, Power, Reality and Time – he will be unstoppable.

Those are some ridiculously high stakes, and many Avengers here will fail in trying to thwart him. The film doesn’t pull punches, starting right off the bat with Thanos destroying the Asgardians who escaped on spacecraft at the end of THOR: RAGNAROK. A few more minutes into the movie, the villain than disposes of Heimdall (Idris Alba) and Loki (Tom Hiddleston), and it’s devastating. It’s one thing to kill off a beloved character, but it’s something entirely horrific to watch Thanos strangle the life out of Loki. It seems especially incongruent after the farcical tone of the previous film, but ace thespians Hiddleston and Hemsworth make it work. In fact, Hemsworth sets the tone brilliantly in that first scene by expertly showcasing the comedy and tragedy inherent in his character and the MCU. He ends up giving the best performance in this film and has become the most compelling and watchable of all the Avengers.

Yet of all the shocks, and all the action set-pieces, including some very good skirmishes throughout like the extended battle on Wakanda where Black Panther (Chadwick Boseman) and his people nobly join the Avengers, it’s the ending that packs the biggest wallop. And it’s the one that has all the tongues wagging and fingers clacking away on social media threads. In the end, Thanos wins and obliterates half of the universe’s population with the snap of his fingers. Watching some beloved characters disintegrate into ash is devastating, for sure, but it’s also confounding, and more than a touch irritating.

Why? For starters, any audience member, even those who are not aficionados, knows that it’s a bit of a ruse. We know that second part of the story is coming. Also, anyone who knows anything about Hollywood and commerce knows that Marvel isn’t going to kill off half of its golden geese. Finally, talk of the latest sequels to Doctor Strange, Black Panther, Spider-Man, and the Guardians of the Galaxy have been all over the news lately, especially with the staggering success of “Black Panther” these past few months.

Thus, that lump in your throat is very, very temporary. And to add a bit of insult to it, the post-credits sequence confounds even more by having Captain Marvel be the recipient of a distress call as earth starts to lose half its citizenry. The story of Carol Danvers comes out in 2019, a month before the second part of “Infinity War” and will now have a lot of explaining to do. For starters, her origins story is slated to take place in the decade of the 1990’s, so how she figures in this contemporary tale remains to be seen. Also, the salvation in the original comic six-parter comes from other characters, but then the MCU has often rewritten backstories and characters. Who will fix the universe? My money is on Stark and Strange putting their two brains together and coming up with some sort of plan involving time travel.

Considering that that ending reveal is the spoiler that MCU has put all of its Sturm und Drang around, it isn’t quite the shocker it’s designed to be. By now we know that any tragedy befalling the Avengers, or any superheroes for that matter is far from permanent. (Hello, the resurrection of Superman in “Justice League.”) And with that, the MCU underlines a problem with its franchises – they’re never really going to kill off their main characters. It’s a flaw that mars this otherwise sterling tale because it takes us out of the movie while the movie plays before our eyes. Best to not obsess over all this too much, however, especially when there are a thousand fan theories out there to chew over how Captain Marvel is going to fit into all of this. Watch the trailer.