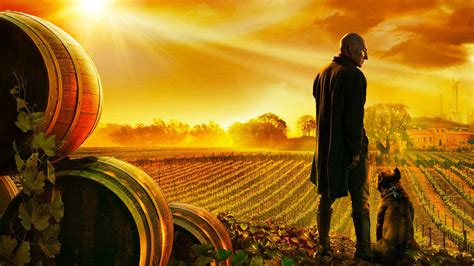 “One thing that is relatively unique, or endemic to the Star Trek franchise, is that it’s optimistic, or hopeful,” declared Oscar-winning screenwriter Akiva Goldsman who co-created the lastest latest installment in the franchise – Star Trek: Picard. “It offers the promise of the future, rather than the threat of it.”

Star Trek: Picard, which is a follow-up to Star Trek: The Next Generation (1987) and Star Trek: Nemesis (2002). Sir Patrick Stewart returned to his role as Jean-Luc Picard.

Goldsman, who is also known for writing hit screenplays such as A Time to Kill, A Beautiful Mind [which won him an Oscar for Best Writing in 2002], I, Robot, Cinderella Man, I Am Legend and The Dark Tower is credited as the creator of Picard, along with Kirsten Beyer, Michael Chabon, and Alex Kurtzman.

We asked Akiva why the Star Trek franchise was so enduring. Many film and television incarnations have been produced for over half a century. “I think that Star Trek is often a response to the time that the particular show airs. If you think about the original series, we’re talking about the late 60s, there was a paradigmatic change of importance culturally,” he opined.

Akiva Goldsman described how individuals in the time period in which Star Trek was conceived felt alienated and confused. It was the time of the Vietman war and massive social upheaval. “That which they believed they could count on was slipping away,” he added. “The future is unknown and could be this apocalyptic vision. But with Star Trek, you get this future of understanding and grace. It’s an ethical and empathetic view of interaction.” This is the reassuring philosophy that has connected Star Trek’s audiences to the screen for decades.

Today, audiences are equally fearful of what the future might bring.

Goldsman discussed ideas about the human race, how to best deal with each other, and the future of the planet during the development phase of Picard. Essentially, Picard personifies grace and compassion despite the changing and hostile landscape.

The World of Picard

Picard is very different than the other Star Trek films. In the latest installment, Picard is no longer Captain of the Enterprise, but he remains “a man who goes forward with ambition.” The writer said, “Patrick is bringing this idea that heroic – emotional and interpersonal heroics of self-awareness – are things that can come in late stages of life.”

“The sage [also called senex or sophos] is typically not the protagonist in archetypal terms. The sage is typically someone who gives wisdom to the protagonist. Obi-Wan only gets a series in his twenties, apparently. But, I think there is a proposition here narratively that heroes can come at all age,” said Goldsman.

Within the world of science fiction, the writers are able to explore this humanity in a new and exciting way in a world not too far away in the future. “I think science fiction at its best is sneaky. I think it becomes a sugar the pill.”

The screenwriter discussed the other planet representing the other nation and the alien skin representing another race. The metaphor provides the illusion of safety, but still the opportunity to discuss something true and meaningful.

“The audience gets to go on this journey and feel safe, but then, in the end, they realize it was their journey all along. That’s easier to do in science fiction. You don’t start in a house that looks like your house or an ‘other’ that looks like the ‘other’ you know.”

With any Star Trek reboot or expansion piece, there’s a certain obligation to pay homage to the past. While working on this TV series, Akiva Goldsman considered his wife, who wouldn’t necessarily be interested in a sci-fi series, along with his children, who are too young to know the original, but also himself, who attended early Star Trek conventions and has always been a big fan of the franchise.

“There was no way to predict the correct balance of old and new. It forced us to be experiential,” he added. “This group of folks who worked together – especially the creators – there’s a tremendous love for Star Trek. These are four different versions of Star Trek fans and love is deep, but we’re different.”

Half of the creators watched the original series in live broadcast, while others were more into Nemesis and others still more into Voyager. “If we could have a Venn diagram of our interests and follow our gut, we might find a Trek that seems suitable.”

“Michael [Chabon] and I had never written Star Trek before. I talked J.J. Abrams into putting me in a few movies in cameo roles, but we really just applied the tools of drama in the writers’ room. Write a good story and use Star Trek grammar. That was the weird brew to appeal to both those who know and love and those who knew little about the show.”

In the writers’ room, Goldsman said they want the best idea to always win, despite who is running the room at any given moment. “We’re summer camp counselors,” he joked. “The enlightened voice at the pulpit. There needs to be someone who gets everybody going and gets everybody excited or gets things back on track.”

The main idea is to get a lot of great minds together in the writers’ room and then have these individuals inspire one another. “As my friend Will Smith used to say, ‘My dad’s got a barn, let’s put on a show.’ If your idea is good, it will win.”

In one example, an assistant in the writers’ room eventually became a staff writer. Then, there’s Kirsten Beyer, who has been writing Star Trek stories for so long, Goldsman described her as “the oracle.” He added, “I don’t think any of us would know how to do this without her. She’s the epicenter and the keeper of the Star Trek flame.”

Beyer represents the source material in a way no one else really understands. In fact, when it was announced she was working on the series, the fans at a festival were nearly as excited as they were when Patrick Stewart’s name was announced.

Among the rest of the TV writers’ room, they actually (and surprisingly) were not concerned with only hiring writers familiar with the Star Trek world. “I will often say, ‘Why should I care that you’ve ended the episode with that cameo or how are you going to create an emotional exchange with the audience in that moment?’”

This is a really powerful statement, given the amount of intertextuality within franchise films these days. It’s a bit of a crutch to lean back on classic homage moments, so knowing someone is there to make sure the moment hits despite a fan’s prior knowledge of the world makes the show all the more powerful.

“For example, Seven of Nine appears at the end of one episode, but we talk about her being an amazing pilot before, so when she appears, there’s a character intro – she sees Picard and collapses – but stands on its own if you don’t. That’s the trick where you might just cutaway to her if you only cater to that audience. We try to avoid those moments to keep novices and experts on the same track.”

Along with past and present considerations, there’s also the debate of whether or not to modernize aspects of the series. The new series has some cursing, but hearing “hell” or seeing brief nudity was equally bold in the past (Gene Roddenberry wasn’t allowed to show a belly button on screen for example).

“Star Trek has always been modern, bold and extraordinary progressive, at heart,” Akiva added. “Sometimes we’re accused of having a darker view than Roddenberry’s original, but we do so to heal the wounds, not destroy anything.”

Connecting to the Human Experience

As a writer/producer, Goldsman loves to portray the human experience within any genre. “It’s some combination of what I enjoy and what folks are interested in,” he said about his diverse producing and writing credits.

“Is there something others enjoy that they will pay you to write. Star Trek, for me, is something I would do for free, but don’t tell CBS. I get to come to work and play Star Trek for real. For me, that’s a gift.”

During his time as a writer, Goldsman has fallen in love with surprise moments in cinema, such as the world not being real in A Beautiful Mind. “I find that in my work, such as the alternative cut of I Am Legend where Robert Neville (Will Smith) realizes he’s been the monster all along, I find those reversal moments most personal. The world is not what it seems. You think you’re on sure ground and then the world crumbles and what you thought was safe was not.”

Goldsman sees this as a theme that permeates across his work. “I look at my own personal history to understand that idea that kept emerging. So much of the work is in the behavior of the actor, so you just want to show them the tip of the iceberg and let them imagine what’s underneath it.”

“On I Am Legend, we rehearsed the scenes without dialogue and the behavior or narrative structure tells the story, so what they’re talking about can be something totally different.”

And, to do this, you have to be connected to the world and not just your work. Akiva Goldsman offers his final words of wisdom to screenwriters of all stripes.

“A successful screenwriting career is a cumulation of wins and losses and the opportunity to keep playing. That’s a hard thing to remember. Nobody is always on. The job isn’t winning every day. The job is playing every day. Writing well is a combination of hard work and good luck. The hard work gets you on the platform, and if you’re on the platform, the train will come. But if you’re not doing the work, you won’t.”