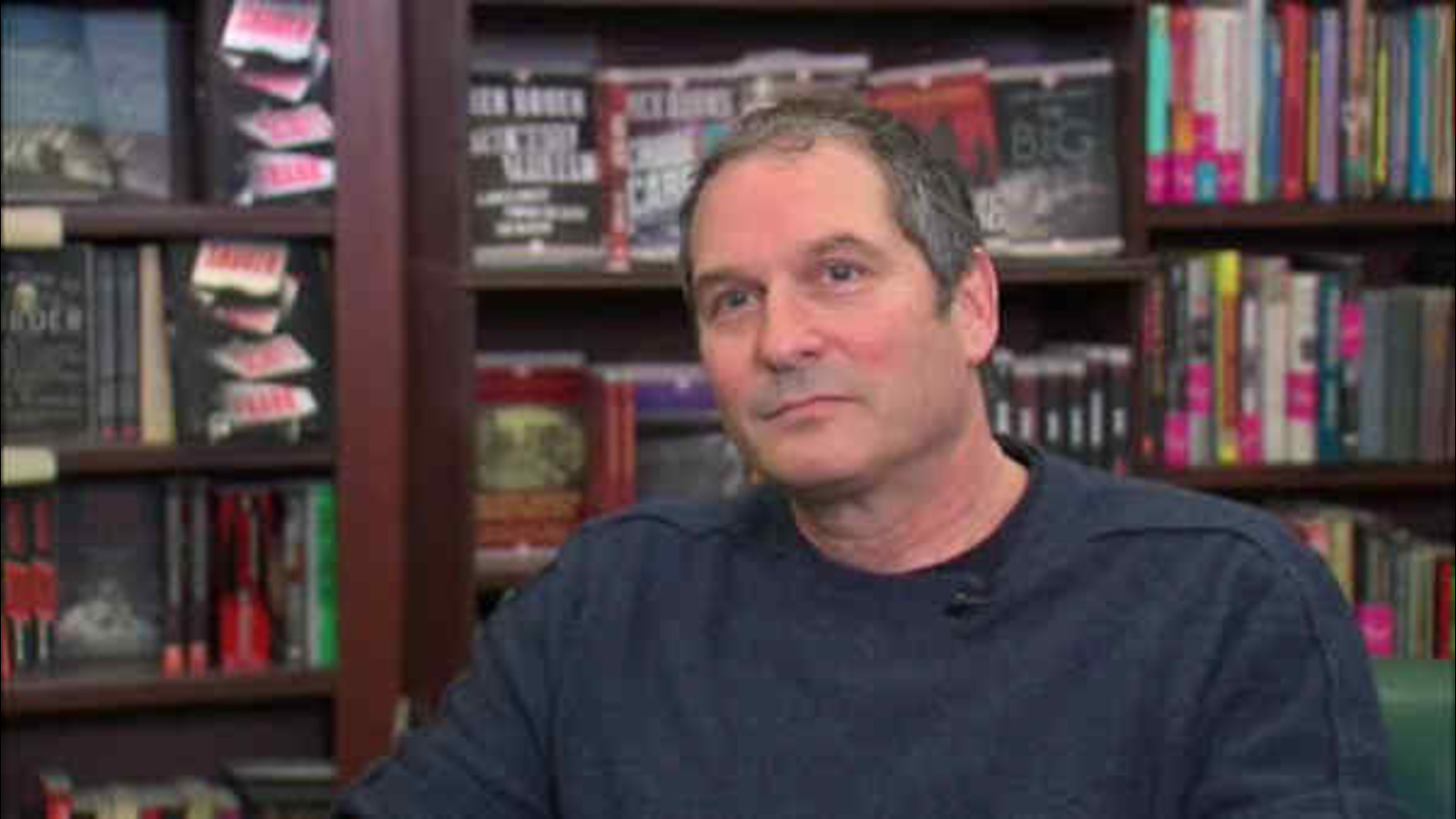 Screenwriter and director Scott Frank has one hard-and-fast rule that he says has led directly to his success: he writes every day — for at least 10 minutes. Some days, that effort stretches into two hours or at the most, four hours.

Frank spoke to an audience of Texas screenwriters at the “On Story” conversation about “Sustaining a Writing Career,” sponsored by the Austin Film Festival.

He shared his insights about how he became a writer, how luck has played a part in building his successful career, and how to improve the craft of screenwriting. He also talked about his upcoming project.

Frank has written several original screenplays as well as a string of novel adaptations by crime writers Elmore Leonard and Lawrence Block.

He became a director after working as a writer with some of the biggest names in Hollywood such as Steven Soderbergh, Out of Sight (1998); Steven Spielberg, Minority Report (2002); and Sydney Pollack, The Interpreter (2005).

Liam Neeson as Matt Scudder in A Walk Among the Tombstones

How Frank Became a Screenwriter

During the Iran hostage crisis from Nov. 4, 1979 to Jan. 20, 1981 as a college student attending the University of California Santa Barbara, Frank felt inspired to write his first original screenplay, Little Man Tate.

After graduating college in 1982, Frank began to focus writing more about the boy character, Fred Tate. It took eight years before the story became a film project but in the meantime, Frank established himself as a screenwriter.

How Luck has Helped his Career

Looking back over 30 years, Frank said he did not have a career plan at 24 years old.

“I don’t know that there was a conscious design for my career as much as it was blind luck,” he said. “I was incredibly lucky.”

He happened to meet someone who had the ability to alter the path of his entire career.

“I was very lucky that the first person that I met early on in my career was Lindsay Doran (actress and movie producer best known for The Firm in 1993, Sense and Sensibility in 1995 and Stranger than Fiction in 2006), for instance. That’s just luck. There’s no reason for it,” he said.

“I could have met (producer, Jerome Leon) ‘Jerry’ Bruckheimer (best known for the television series CSI: Crime Scene Investigation since 2000, and The Amazing Race since 2001,) and I might have done something else, but I met Lindsay Doran and she actually took the time and taught me how to write.”

He also met late film executive and producer Ned Tanen, best known for Sixteen Candles in 1984, The Breakfast Club, and St. Elmo’s Fire both in 1985. Tanen brought Frank to Paramount and gave him a desk on the studio’s writing floor.

Judd Nelson as John Bender in The Breakfast Club

While at Paramount, Frank met other writers and movie producers, including Dennis Feldman, best known for Just One of the Guys in 1985, The Golden Child in 1986 and Species in 1995.

“One day I wandered into his (Feldman’s) office to play Nerf basketball and I said ‘I have this title in my head and I have no idea what the movie is about. I just like this title, it’s a weird bumbling of words – Dead Again.’ And he said ‘huh’ and by the end of the basketball game I had the plot for the movie,” he said.

“Weird stuff like that just happens. I didn’t go in there to talk about a movie. I had no agenda, just luckily that’s what happened.”

He worked on the screenplay for over two years before it became the 1991 movie directed by and starring Kenneth Branagh and Emma Thompson.

To further his luck, he often becomes “the dumbest guy in the room.”

Crucial conversations with influential people have often changed the direction of his screenplays. As an example he described a phone call he received from director Barry Sonnenfeld during pre-production for the 1995 movie, Get Shorty.

“Barry (Sonnenfeld) called me up in the middle of the night and he said ‘I think Chili (Palmer, played by John Travolta,) should rent a minivan.’ So I wrote the scene and there was this whole scene with the lady on the bus who calls it ‘the Cadillac of minivans.’ I never would have written that if Barry hadn’t called me up,” he said.

John Travolta as Chili Palmer in Get Shorty

Frank’s Tips for Improving the Craft of Screenwriting

Now that he also directs, Frank writes more sparingly and he includes critical visual details in his screenplays.

“Now when I write a little paragraph, I think ‘Ok. That’s eight hours of shooting. Do I really want to do that, to be outside in the snow again? How about interior, girls’ locker room, day.’ So you’re constantly thinking about stuff you’re going to make, all the time,” he said.

“There are things not in your script that you need in your script – things that were very non-specific and stuff that you just hoped someone would work out and now you’re the someone.”

Writers will write better scenes if they think like directors, he said.

“Even if it’s two people sitting at a table. It makes you want to make something happen,” he said.

“If you just write a scene with two people sitting at a table, guess what? You get on the set and there are two actors sitting across from one another at a table and there is nothing for them to do but say your lines. Unless your lines are like My Dinner with Andre, — which is spectacular dialogue — nothing is going to hold your attention.”

Writers should write dynamic scenes as visually interesting as possible and think about who might interrupt, or what unexpected bit of business may occur.

“I had a little of that as a writer because I worked for so many directors from the get-go, so I was always aware that something always has to be happening. Still, if you don’t create something, a director will fill in the vacuum. Sometimes it’s not good.”

Wallace Shawn as Wally Shawn in My Dinner with Andre

Frank has a reputation for creating compelling openings for each of his screenplays; he uses that same writing device at the start of every scene throughout his screenplays.

“People who are happy are boring,” he said. “Unless it’s somebody who’s really happy and then something horrible happens to them – that’s awesome.”

In order to enjoy a movie, a viewer must be invested pretty quickly. Writers must write their scripts with that rule in mind.

“We are also writing for people who read the script,” he said. “Our writing is a factor. Sometimes people write these things when translated are really good, but they read horribly. I would argue that you have to do both, especially early on in your career and especially if you aren’t directing,” he said.

Readers must care about a script’s main characters right off the bat and writers must reveal them as authentic and multifaceted people motivated by passion, Frank said.

As examples of solid characters, Frank cited those created for: Raging Bull, the 1997 book written by authors Jake LaMotta, Joseph Carter, Peter Savage and Nick Tosches, and adapted for the 1980 movie by screenwriters Paul Schrader and Mardik Martin, and also the characters in Nightcrawler, last year’s screenplay by Dan Gilroy.

“I’m so glad that I’m not them,” he said. “I have a very boring life and I like it that way. My childhood wasn’t particularly fascinating, but I had a great imagination and I’m very curious. I have weird friends and I know that I collect weird people and I just like that,” he said.

“I like people in crisis. Also I think good stories are about people ‘in extremis’.”

He also looks for ways to endear a complex character to his or her audience.

Writers must find “the hook” that makes a character interesting. Mistakenly, most writers spend too much time on exposition, Frank said.

Don’t Set the Scene at the Beginning of a Screenplay

Drop brief descriptions about the setting throughout the script, he said.

“The big mistake people make is they feel that they need to set the scene. So they spend a lot of time in the beginning of their script setting the scene – telling what the apartment looks like, introducing you to their kids and their dog and their car and their life,” he said.

“Nothing is more boring than that.”

A screenwriter entertains; he does not explain, Frank said.

Nicole Kidman as Silvia Broome in The Interpreter

Frank created the tone for his movie, Walk Among the Tombstones, loosely based upon the tenth book in a series of novels written by Lawrence Block about an alcoholic and former private investigator Matt Scudder.

In order to write the adaptation, Frank had to change the original setting and borrowed a different opening scene from one Block mentions in another book in the thrilling detective series.

“So I wanted something that started off with a bang where you saw this man and you kind of got one sense of him,” he said.

“I thought what would be really interesting is if the guy you met in the first five minutes was different from the guy that you meet after the credits.”

Screenwriters must learn to say much with very little.

“That’s exactly what a script should look like,” he said.

Jennifer Lopez as Karen Sisco in Out of Sight

Make the Script your Own

While writing an adaption for a novel, Frank does not collaborate with the author.

“I want the author to like me; I don’t want them to help me,” he said.

For Get Shorty, Frank had to invent at least half the story for his script, a huge departure from the novel.

“I realized for the movie, for the story that I wanted to tell — not all of it’s in the book,” he said.

The same rule applies for his current project.

This year he plans to direct a movie loosely based on a German children’s novel, set inside a little village in Ireland.

“It’s about a flock of sheep who solve the murder of their shepherd. He has read to them every night from Agatha Christie because he’s a lonely, sad guy. They’ve heard every Agatha Christie story there is so they believe they’re up to the task,” he said.

“One or two of them may be smart, but the only person dumber than the sheep is the town constable.”

“The sheep can choose to forget things and any time something bad happens, like death, they all choose to forget. So they never realize that through our memories is how we actually keep people alive,” he said.

If you enjoyed this article, why not check out our other interviews with Scott Frank:

What I did was Ignore the Hardware