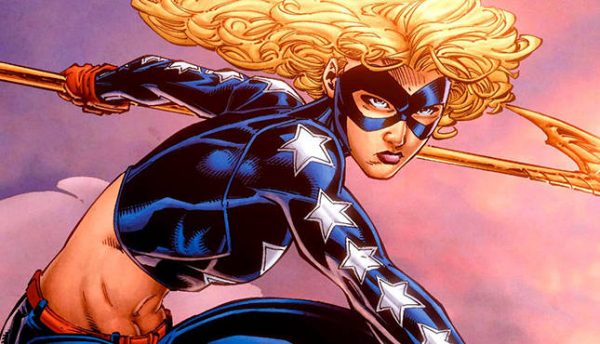 Geoff Johns is one of the most popular and prolific comic book writers of his time. He is a New York Times best-selling author, award-winning screenwriter, and the only comic book writer of his caliber with an established 20+ year career in producing film and television at Warner Bros. He has written highly acclaimed stories featuring Superman and the Justice League, while also re-inventing lesser-known characters to commercial and critical success. His comics have been a constant source for adaptation, including box-office hits like Wonder Woman, Aquaman, and Shazam! He currently heads his own production company Mad Ghost Productions. He spoke with Creative Screenwriting Magazine about superheroes and adapting comic book and graphic novel properties to films and TV series.

We asked Geoff about his long-term fascination with the comic book world. “My brother and I found a box of old comic books in my grandmother’s attic when we were kids.” They were especially attracted by superhero characters like Spiderman and Batman. But Johns’ attraction to comic books was more than simple good vs evil stories. “Comics have morality tales at their center. The heroes that would fight for what was right.”

Geoff Johns is more than a filmmaker. He is a film and TV writer and illustrator who draws his own characters. As he progressed through his childhood and fine-tuned his skills, comic books evolved into more sophisticated stories. “I always loved the metaphors and symbolism that these characters embodied.” The comic world is filled with real-life elements you can relate to, but also contained, “fantastic, magical element with superheroes and captivating visuals.” The filmmaker boils down his love for the comic book and graphic novel world to modern-day American mythology.

Comic book and graphic novel storytelling differ from live-action on a number of levels. “There are obviously elements like format, structure, budget and audience experience,” which make these stories stand out. “They rely on graphic storytelling to make them a unique art form. There’s no sound, music or actors in comic books so their execution is very different. All this is in your head when you’re reading a graphic novel

Despite the cheaper price tag than producing films and TV shows, there are still constraints in both comic books and films. “Comic books can give you larger than life characters. You don’t have to consider the budget. You can blow up planets or morph into a cyborg. So long as you can draw it. You’re only limited by your imagination.”

The element that all live-action and comic books have in common is a strong emotional core. Geoff Johns cites Aquaman as an example to illustrate his idea. “Aquaman was a man born of two cultures – land and sea. He didn’t feel he belonged to either. His internal conflict led him to believe that because he was a man of two worlds, so he was the right person to bring them together. This emotional core is apparent in both the film and comic book versions.”

There is also a difference in the way comics and films are consumed. “Comic books are a singular experience. You read them and process them by yourself. Films and television shows are generally watched in a group. Being in a cinema allows you to feed off the emotional energy of the audience as you bounce off each other’s emotional reactions.”

Comic books are traditionally targeted toward the 14 – 24 year old demographic. Film adaptations of comic books and graphic novels must target all four quadrants of cinema-going audiences in order to become financially viable. Johns isn’t overly focused on these concerns. Like all screenwriters, he focuses on telling an emotionally compelling story.

“Look at Wonder Woman. I try and write a great story that will resonate on all levels. It’s not designed for one slice of the audience pie.” He continued that fourteen-year-olds are very different today than when he was growing up, so they will appreciate the metaphors, themes, and symbols that might be considered more appropriate for adults.

Despite his love of the writing process, Geoff Johns conceded that despite not being entangled in defining target audiences, he claimed to have made some “age-related” adjustments in Stargirl on Disney+. “I’m not going to use extreme language, sex or overly graphic violence. I write from a very humanistic point of view. From a place of how someone would feel about a core set of values.” Aquaman explores the theme of not belonging. “It’s something a both a fourteen and forty-four-year-old can relate to.”

Johns is more interested in writing holistically and tells stories from a global consciousness.

During his time at DC Entertainment, Johns had a rich trove of source material to draw from – characters, worlds, and relationships. We asked him if this overwhelmed him or aided his creative process.

“When I was writing Wonder Woman 1984 with Patty Jenkins, we only focused on the story at hand.” Johns doesn’t necessarily think about sequels, prequels, spinoffs, or standalones unless it organically emerges in the development process. However, when he writing Stargirl he delved more broadly into the source material to plan the first two seasons. He described the richness of the source material as a smorgasbord. “You take what you need and come back for more later.”

It isn’t a dichotomous choice for Geoff. Sometimes you focus on a scene, while others you may think about what might be appropriate for the next season. “When I work on a comic book or a television program, my brain tends to plan long-term. I don’t plot the whole thing, but I plant seeds for subsequent seasons. It’s part of the serialized television process.”

The worlds of the major comic book publishers, Marvel and DC are collectively called a “Universe” with well-defined characters and worlds. We asked Johns how closely he adheres to the source material.  “I think it’s fun to have a universe in which characters can interact. I can do Shazam comic book or standalone film that tells its own story. If it evolves or talks to another character, great.”

He can also filter out extraneous material “You get to tell a more focused story when you don’t have to deal with other characters. You can also tell great stories when all these characters meet. All these great personalities and themes force them to play off each other. I like doing both so you can explore the characters properly in ways you may not have previously thought of.”

We can agree that comic book characters were more archetypal prior to the eighties. “I think everyone realizes there was a renaissance when these characters started to feel more like human beings.” These include Dark Man Returns and Justice League International. “They all have distinct, developed and fun personalities. They felt more like real people than superheroes.”

“In the early comic books and graphic I read, the villain showed up and the superhero foiled them. It all felt a little bit hollow. They tell more interesting stories in modern-day stories to keep readers hooked month after month,” said Johns.

The superhero gender imbalance in comic books and graphic novels is still an issue, even in today’s enlightened times. Geoff Johns’ latest screenplays have deliberately focused on female superheroes – Wonder Woman and Stargirl. Obviously, when the comic book world began, they were geared towards young boys and written largely by men. But through pushing, the balance has evolved. Johns claims that many studio executives didn’t believe a female superhero lead would work and held back gender progress. Mega hits like Wonder Woman have modified this thinking.

“I created Stargirl because I wanted a female superhero who had her own legacy that wasn’t a supporting character based on a male character like Supergirl or Batgirl. She was the lead and the sidekick was her stepfather.”

As comic book characters evolve into more complex characters, so too does the complexity of the villains. Screenwriters tend to focus on heroes, but villains are equally important. “A perfect villain is designed to challenge a hero’s strengths and weaknesses. That villain is based on who that hero is,” said Johns. Villains are a mirror of the hero. A dark side.

“Superhero stories are always about representing the hero’s internal conflict externally. The villain challenges the external conflict. The external threat needs to resonate with the internal challenge within that hero. Their interests are intrinsically connected,” continued Johns.

“The stories that don’t work for me are when the hero is going through something emotionally and the villain’s threat is unrelated to that directly or thematically.”

Geoff Johns attributes his career success to film director Richard Donner, known for movies like The Omen and Superman. Donner is a mentor and second father to Johns. “As an assistant, I went everywhere with him. If there was a story meeting, he would ask me to sit in with him. It was a wonderful learning experience because I could ask him questions about what he was doing.”

We asked Johns what made Richard Donner a successful film director. “He listened to all ideas. Even if he didn’t use them. He said inclusion was always about the project. Always be open to constructive criticism.” Johns still uses Donner’s words in his TV writers’ rooms. “We ask writers where an idea comes from. What is motivating the idea? What’s the instinct behind the idea?”

Geoff Johns quotes Richard Donner for his final pieces of advice for film and TV writers.

“The best stories always have heart. Story instinct comes from four places – the heart, the brain, the gut (which most writers don’t have) and the [writing] muscle. Too many screenwriters write with their brains or their muscle instead of their heart.“