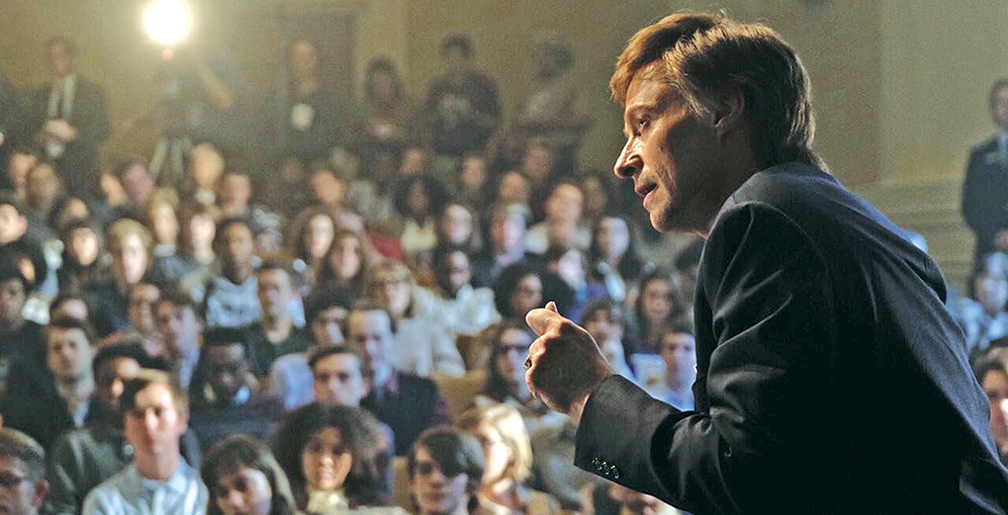 Whilst in the throes of one of the most galvanizing political times in history, the influence of politics in today’s cinema seems inevitable. Creative Screenwriting Magazine sat down with screenwriters Matt Bai and Jay Carson who penned the screenplay of the failed Democratic senator Gary Hart in their film The Front Runner.

“First and foremost, we set out to make a film because there’s this gripping, human drama that occurs at a moment where various forces are reshaping the political culture in mid-1980s America,” said screenwriter and author Matt Bai.

Bai, a Pulitzer Prize-winning journalist, formerly with the New York Times, wrote a book titled All the Truth Is Out (2014). The film adaptation called The Front Runner was co-written by author Matt Bai and former Democratic party political operative and Jay Carson (House of Cards.) Jason Reitman (Up in the Air, Juno) sat in the director’s chair.

“If you hate what you’re doing [political campaigning] and you’re healthy, you’ll do whatever you can to find something else you love. I loved writing as much as I hated politics, so that led me in the right direction. Knowing where I wanted to go was easy, but getting there was much harder. It required a lot of humility to leave the top of one business and enter the bottom of another,” reminisces Carson. “There was a percentage of luck and hard work to advance my screenwriting career.”

Carson’s friend from college created the Netflix hit, House of Cards, which led to Carson becoming the political consultant on the first season of the hit TV show. Carson worked hundreds of hours on the show, only making around $1,000 per episode, but he knew this was his ticket to a new career. His grit and persistence paid off.

The operative-turned-screenwriter worked on the series for four years, made the right connections, and finally found his big break in the business. For both screenwriters, however, the goal is to write for integrity rather than fame or profit. “If tomorrow I wake up and there are no more words left in me, I want people to think, that’s an artful body of work,” mused Bai.

Curiously, the screenwriting duo wrote the screenplay before “Trump America,” but they do believe the political climate in 1987 began the collision of politics with entertainment. “From that moment on, we treat our candidates like they’re entertainers or celebrity, creating a process where treating candidates like celebrities means you will later get entertainers as candidates,” added Bai. This blend of campaigning and political theater still resonates strongly on today’s political stage.

The Front Runner stars Hugh Jackman as Senator Gary Hart, along with Vera Farmiga, J.K. Simmons, and Molly Ephraim as part of a large ensemble cast. “Part of the beauty around having twenty main characters is that viewers can come away with different perspectives,” said Carson. “I come away seeing something different every time I see it.”

Since both scriptwriters had strong backgrounds in politics, they had to shift between the instinct to be factual with the need for drama. “As a former political operative and political journalist, this movie required us to see the world through the other’s perspective,” said Carson.

Bai told Carson the details of his book [The Truth Is Out] and he was hooked on the story and knew it would be a great project to turn into a movie. In addition, Carson wanted to personify his feelings of a life in politics. He started his career as an idealist, hoping for real change, and left the political world heartbroken and disillusioned.

Carson said that his writing partner “found this moment where it all changed. We got to go back and explore how our political system got so messed up. Writing the screenplay was cathartic, and that’s what a good writing process should be. You should approach it with a question and work through the process.”

Carson added, “If you aren’t in love with the story… if it doesn’t grab you and won’t let you go, you won’t make it to the finish line. The concept for the book is a decade old and we’ve been working on the film for six years. You’ve got to be committed to the project to get it on the screen.”

The author said when the writers sat down with the director, they all discussed the idea of the political movie feeling real as possible. “There aren’t a lot of political movies that feel real,” said Bai. “Jason had us watch The Candidate – Michael Ritchie’s film – and even though it’s fifty years old, it still gives you the visceral feel of an actual candidacy. He wanted us to infuse the script with what we had lived.”

Like The Candidate, which stars Robert Redford and Peter Boyle, the screenwriters wanted The Front Runner to be packed with real-life stories from their political backgrounds and shared experiences.

In real life, the writers actually met at a Presidential campaign back in the year 2000 and they’ve been friends ever since.

Together, the writers have lived through eight Presidential campaigns. With this experience, they were able to continually flip back to pages of the screenplay and ask, “Does this feel real?”

With that idea in mind, it’s possible certain aspects of the film will confuse some viewers since politics are confusing in real life.

For this type of film, the screenwriters and director didn’t need to take too much poetic license because the real events were so cinematic. “You don’t need to turn up the volume on stuff,” asserted Carson. “There are places where you compress time and there’s a main character we’ve amalgamated for the sake of clarity, but we didn’t want to adapt something where we felt like we had to fundamentally turn up the volume. This story has incredible cinematic scenes on its own.”

In order to the turn the book All the Truth Is Out into the film The Front Runner, the duo had to pick out the major parts to construct a narrative for the movie. “It took me 100 pages just to lay out the events for readers in the book, but the title comes from a poem,” said Bai.

“The hardest thing for me to do in the adaptation process was losing the book title,” joked Bai. “It wasn’t going to make as much sense on the screen. The hard thing about adapting something complex on the screen is that you want to show the information, but you can’t be expository like you can with a book.”

“The last thing you want is for characters to be delivering long soliloquies as opposed to being real. Getting information across in a way that feels natural and keeps the audience engrossed is the biggest challenge in making something big and complicated in a world like this one,” expanded Bai.

Bai credits the writing team with their ongoing ability to track those moments that felt like a character was talking at the audience and adjusting the dialogue. “We were also willing to leave the audience a little confused. We have faith in the audience and thought they could catch up rather than spoon feed them,” said Carson. “We drop you in a chaotic world and you have to watch proactively to keep up, but I think that makes a better cinematic experience.”

“We’re really allergic to message movies that tell us what to think,” asserted the duo. “That’s my view as a writer. As a viewer, I’m really annoyed by movies that think I’m dumb. I like it when a writer or director assumes I’m smart enough to catch up. We don’t need to explain everything. In that first 2½ minute shot, you can choose who to follow and it’s exciting. You know the writers are confident in the audience.”

Clarity has often been described as the first rule of screenwriting, but this writing team is more concerned with allowing the audience to figure things out. They believe shows like The Wire opened the door to allow for some confusion in the language, but the audience knows the world is real, so they can catch up.

“The world is so real that you may not even pick up every line,” said the duo. “There is a little opacity because it’s more important for a viewer to feel the world is real and urgent rather than to catch every single reference in all of its complexity. Having said that, we also want for people to make their own interpretation.”

“We want to start a debate rather than have everyone see the same thing. Political campaigns cover complicated issues. Reasonable, smart people will understand the issues of the film, but they will also disagree about their significance. That’s part of the complexity of the story,” mused Bai.

“We also wanted to welcome people behind the curtain,” continued Carson. “We’ve been in this world for a really long time, so we wanted to use the lingo people really use and assume the excitement in this intriguing world. It’s worth a little confusion to see the truth.”

Despite delivering a film that has confusing moments, the writers never felt confused by their subject matter. “We were able to let it be messy because we knew with absolute certainty what the architecture of the story was and that’s why it holds together,” asserted Carson.

In addition to clarity, the film also tackled ideas of personal privacy in a political life. “We didn’t really approach it thematically,” said the duo. “There’s a great story here and the story tells itself. It unveils a bunch of relevant themes just by being a story and illuminating a moment.”

The writers said their directive was to tell the story with a multitude of complexities, while also giving justice to various viewpoints. In the course of this goal, various themes – entertainment, politics, privacy, gender, and the treatment of women– were explored throughout. But, the core was a character story in a political world.

“I don’t think we had to dwell on any themes we wanted for you to walk away with because they were just there,” continued Bai. Carson deduced they’ll often write one theme, but another will creep up within the story as they pursue the story. “The story and the characters guide us and other themes come forward.”

“The Front Runner is a hopeful movie,” concluded Caron when asked about audience takeaways from the film. “It ends in a quiet, tough moment, but I think it’s a hopeful movie because Gary Hart is speaking to young people and telling them to stay involved. ‘Don’t lose hope because of this…’”

All in all, the screenwriters didn’t want to create a message movie, so there’s no definitive call-to-action. But they do hope the conversation continues. “I just think you want people to think,” concluded Bai. “Most of what’s produced today doesn’t ask—it mostly reinforces a point-of-view. I have no other ambition other than to make people think. We’re drawn to the complexity of life.”