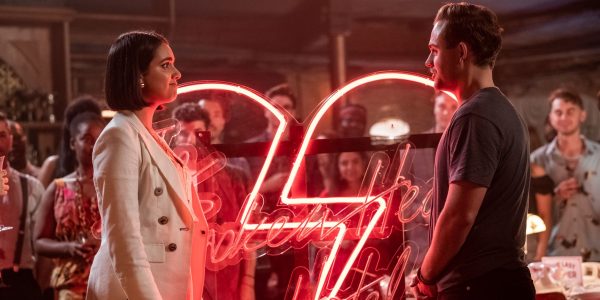 Natalie Krinsky always knew she wanted to become a writer. In college, she started writing a column at the Yale Daily News. “It was a sex column, about dating and relationships in college,” confessed Krinsky. “It wasn’t about personal experience. It was more about what it was like to be figuring out your sexuality at nineteen in this hotbed of hormones and dorm rooms,” she said.

Since it was 2002 at the time, these articles were published online, sort of like a blog. Readers enjoyed the articles so much they started to forward the column to their friends at other colleges.

“I began to have this real following based on my student sex column. So then I wrote a novel based on the column.” The novel was called Chloe Does Yale, which was published soon after she graduated.

Then, she received calls from various producers who considered turning the story into a movie or series. Natalie agreed to sell the rights, but only if she could adapt it. These days, she’s best known for working on shows like 90210, Grey’s Anatomy, Gossip Girl, Red Band Society, and her new film, The Broken Hearts Gallery, which she wrote and directed.

“The adaptation of the book was an ensemble piece like much of my work,” said Krinsky. “There was a strong female character at the center, but it also followed a group of friends in college. I think you have to look for growth in characters, but the way that I tend to begin is starting from a seed of an idea. I think a character evolves slowly, over time. No one comes fully formed.”

The screenwriter will often see a scene or “bit of prose” before she analyzes the character. “I’ll write one or two pages of prose from the character’s point-of-view. That helps me discover who they are, what they want, and what their voice sounds like.”

“Then, over time, as writers know, the character slowly evolves, hopefully into somebody who feels quite real.” But, when she started writing for TV shows already on the air, some of this character analysis had already been done.

“It’s almost immeasurable the lessons I learned working on those shows. Once you work on something where the character is inhabited by a real person who is on television and has these mannerisms, they’re so much more fully fleshed out than we even give them credit for sometimes.”

This lesson taught her to use these real mannerisms in her work. Essentially, once you start to write for real people, the characters adapt on and off the screen. “You want to bring in your own creations, but working on TV is invaluable for a writer.”

In television, Krinsky learned structure, story, and how to make a television show. “I also think it’s important to balance being precious and having a vision, but not just to cling to things because they feel like your last idea.”

“Writing for a television show teaches you to continue to dig deep, keep going, and continue to try to brainstorm and come up with better ideas. The dialogue in the writers’ room is helpful, but also the rejection. As a staff writer, you’re constantly pitching and people are constantly telling you ‘No.’”

Natalie Krinsky concluded, “Your last idea isn’t necessarily your best idea. You can always find something else.”

Since writing for many TV shows, Krinsky has also become a producer. “I love telling stories, but the producing side came from finding books for adaptations. I found books I loved, but I knew in my heart I wasn’t the right person to adapt those particular pieces.”

By becoming a producer, she could bring more articles, books, and stories to life, while also empowering other novice writers who wanted to make the jump into screenwriting. “As a writer, you only have so much bandwidth. You can only write so many scripts per year. I’m only so fast, but as a producer, I can be very invested, but in a different way.”

When someone rejects a script she wrote, it feels personal. When someone rejects a script she’s producing and it gets rejected, it feels like there is something wrong with the buyer. “It’s a fun flex in some ways,” she joked. “You have this unfailing belief without the insecurity of being a writer.” But, of course, the value is only here because she’s also writing work she enjoys.

“There are so many more rules as a screenwriter. I wrote a column without ever having written a column, but in screenwriting, time and space are limited. I think that I truly did not understand how to structure things [in the beginning].”

On the plus side, she enjoyed the visual advantages and the “economy of words” which took some time to understand. “I don’t think I ever got bad advice, but the best advice is just to keep going and continuously try to hone the craft even when it’s impossible.”

“If I’m having a horrible day writing, but I can chip away and write for twenty minutes, then it feels like a victory.”

In Natalie Krinsky’s latest film, Geraldine Viswanathan (Blockers) stars as Lucy Gulliver, and Dacre Montgomery (Stranger Things) stars as Nick. The story follows Lucy after she decides to leave past romance trinkets in an art gallery. We asked Krinsky why the idea behind The Broken Hearts Gallery is so personal to her.

“I had been fired from a job and broken up with my boyfriend and moving apartments,” she said, “when I was literally digging through the rubble of my life and that is kind of how this idea came to me.”

She had also heard about the Museum of Broken Relationships in Croatia, where objects of former lovers are left, along with a brief synopsis of the relationship.

“I was trying to figure out what to do with the remnants of my ex-boyfriend. I thought to myself, that’s a movie.”

Krinsky describes herself as a sucker for romantic comedies and knew she wanted to write her own. She wrote the first draft about ten years ago and kept at it over the years.

“As any screenwriter will tell you, you write and rewrite and change the characters. You continually evolve the story, but I think the essence of Lucy has definitely always been this strong, unfailingly optimistic character.”

For this personal story, she was living the story to some degree. “I was trying to find my way in the world and be a writer. I was trying to navigate dating, so, so many of the things Lucy is going through, I was living.”

“Now I’m married with a child and another one on the way, but the voice of that character and what I was living at the time, or her interactions with girlfriends and professional situations, came from my own experience and the conversations I would have. It came from what I was living in the same way as stories when I wrote my column. I’m happily not dating in my twenties anymore.”

Natalie Krinsky doesn’t describe herself as a broad comedy person, meaning she avoids schtick comedy and instead, focuses on comedy through character. “All comedy comes from character,” she said. “Two people having very different points of view about the world or a situation. I think that’s the most fun and the most satisfying to write.”

At the same time, there’s a hybrid to the comedy behind The Broken Hearts Gallery. “You’ve got to be funny on the page, but you’ve got to set up scenarios to allow your actors to improvise, if you are so lucky to have that kind of actor at your disposal.”

“This might be reverse directing, but we spent a lot of time rehearsing scenes to see what worked on the page. Once we knew that those scenes were going to work and once you’re prepared with a version that’s going to be funny, you have the luxury to have your actors improvise.”

In addition to the leads, actor-writer Arturo Castro (Broad City) is also in the film and has a massive background in sketch and improv comedy. “Whenever Arturo and Geraldine were in a scene together, it was so much fun to watch – all the actors with comedic backgrounds had time to improvise.”

At the same time, they had to shoot the entire film in twenty-five days, so the schedule was still relatively tight. All of this came to be because Krinsky knew she wanted to wear multiple hats in the industry.

I didn’t storyboard. I photoboarded instead

“I didn’t storyboard the screenplay. Storyboarding was abstract to me. As a first time director, I decided to photoboard. We chose locations, then went back with my DP and some PAs, where we set up the scenes prior to having the actors there and walked through the scenes and took photos in the aspect ratio with the approximate angles we were going to use.”

“For me, living in the space and being with real people to figure out that stuff was invaluable. Then, when the actors show up, there’s a conversation because we had a plan for that space.” She also created a comprehensive Lookbook of Lucy’s New York to share with department heads.

“In terms of confidence, I was pretty terrified [to direct], especially in the beginning. But eventually, you don’t have time to think about that and you’re just going. If you know what your movie is supposed to look and feel like and you have a plan, your life is a little bit easier.”

“The fear dissipates and you just need to jump in and do the work,” she said. “You give yourself time and freedom by being extraordinarily prepared. Just jump in, do the work, and hope for the best. That’s all you can do.”

This article has been condensed. Listen to the full audio interview here.